50 things to do in Yokohama

Yokohama has everything for a fun day out: from museums and outdoor activities to cafés, restaurants and craft beer bars

As one of the first Japanese ports to open to the world in the late Edo era (1603-1868), Yokohama has retained its international vibe and historical charm while developing into a massive modern metropolis over the past century.

In recent years, Yokohama – popular for having the most scenic cruise terminal in Japan – has been developed into a tourist hotspot with many new attractions and hotels being built in the area. There are plenty of things to do in Yokohama, including eating your way through Chinatown, zipping around the city with a Segway, riding a roller coaster over the sea, seeing a life-sized Gundam statue, and going on a retail therapy at the many massive shopping complexes.

So check out our picks of the 50 best things to do in Yokohama, head down south and start exploring this beautiful city, accessible in just 30 minutes from central Tokyo or Haneda Airport. 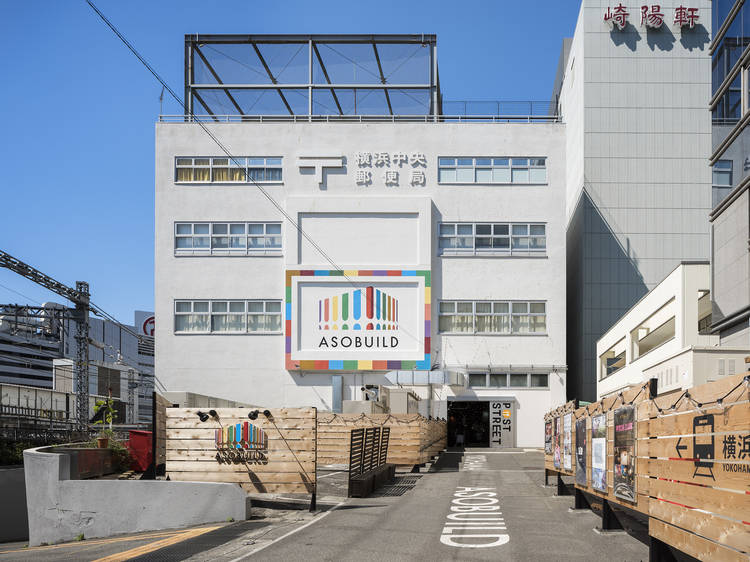 Five storeys of fun in an old post office – welcome to Asobuild, where you can do something different on every floor: there's a kids-only mega-playground on the fourth, pottery and other crafts on the third, interactive art on the second, restaurants on the first and so on. Asobuild 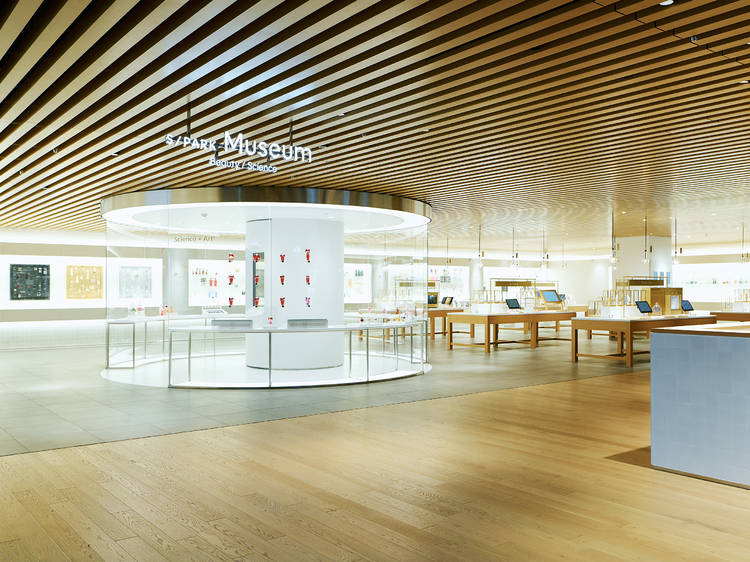 Iconic cosmetics manufacturer Shiseido's free museum lets you recap past beauty trends on a virtual-reality voyage, study the art and science of makeup, and hang out at the in-house café and studio. S/Park 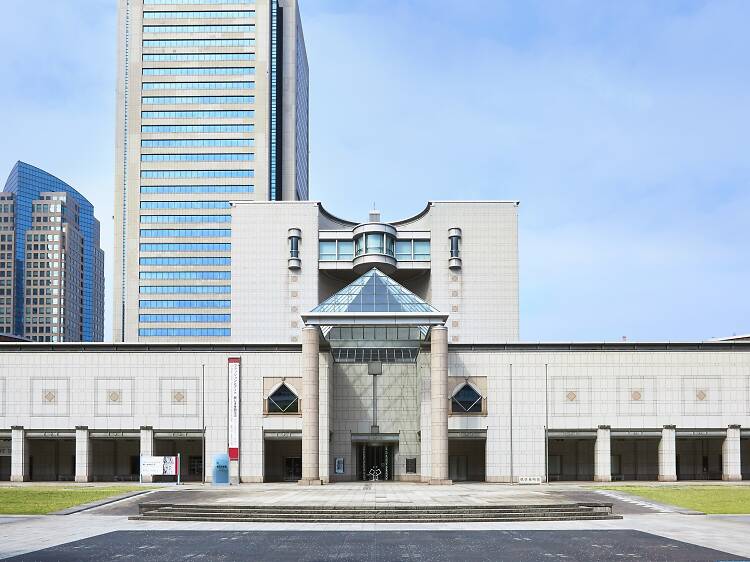 Yokohama has played a major role in the history of Japanese photography so it’s fitting this art museum holds a substantial photo collection. This art-enthusiast hotspot serves as one of the main venues for Yokohama Triennale and displays works showing an interplay of European and Japanese modern and contemporary art. Yokohama Museum of Art 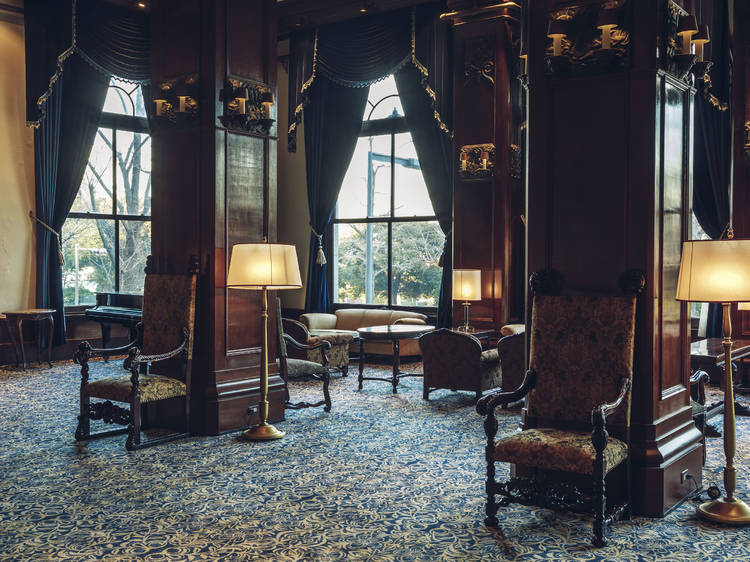 4. Dine out in style

The upscale Hotel New Grand has seen many a famous figure pass through its doors, and its restaurants offer a variety of dishes and drinks. At Il Giardino, you can enjoy authentic Italian cuisine. For a relaxing dining experience, opt for the terrace seats facing the hotel's central courtyard. Hotel New Grand 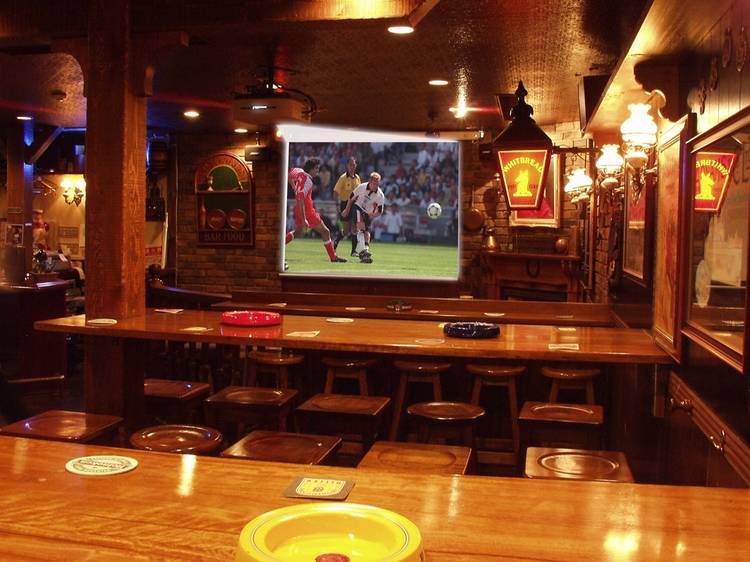 The oldest still-running British pub in Yokohama, the Tavern is owned by a bona fide Englishman and has been keeping locals well nourished on fish and chips, London Pride, Guinness and other essentials for 35 years. It's a great spot for watching sports, too. The Tavern 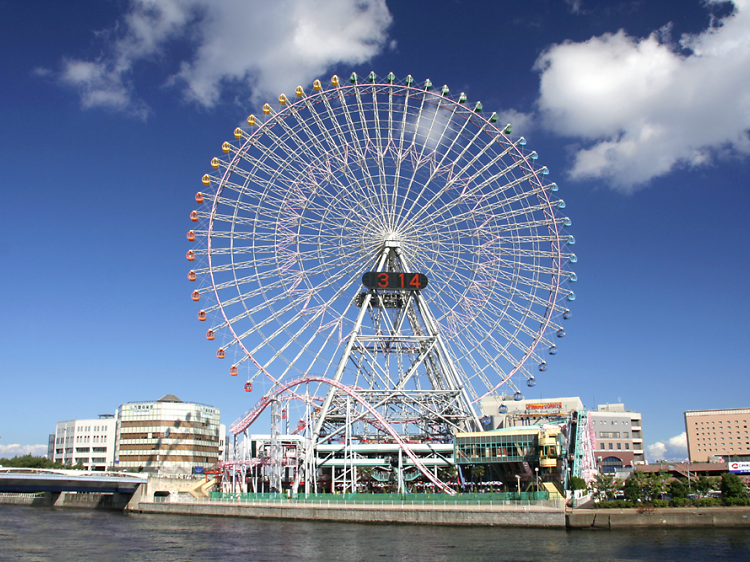 Holding a Guinness World Record for being the tallest Ferris wheel with a clock, Cosmo Clock 21 is a top tourist attraction, offering splendid vistas of the city during its 15-minute ride. Ride one of the transparent gondolas to enjoy 360-degree views of Yokohama. Yokohama Cosmoworld 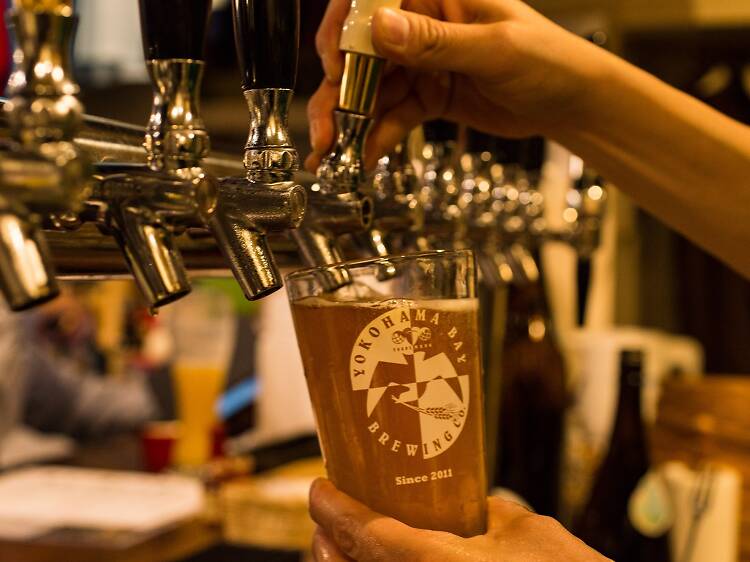 Yokohama Bay Brewing has a homely and welcoming atmosphere, perfect for a relaxing drink. Choose from 10 original beers and four domestic craft beers. Whatever you do, definitely order the signature Bay Pilsner, which won an award at the Gold Brewers Seal 2014 in the Czech Republic, the birthplace of pilsner. Yokohama Bay Brewing 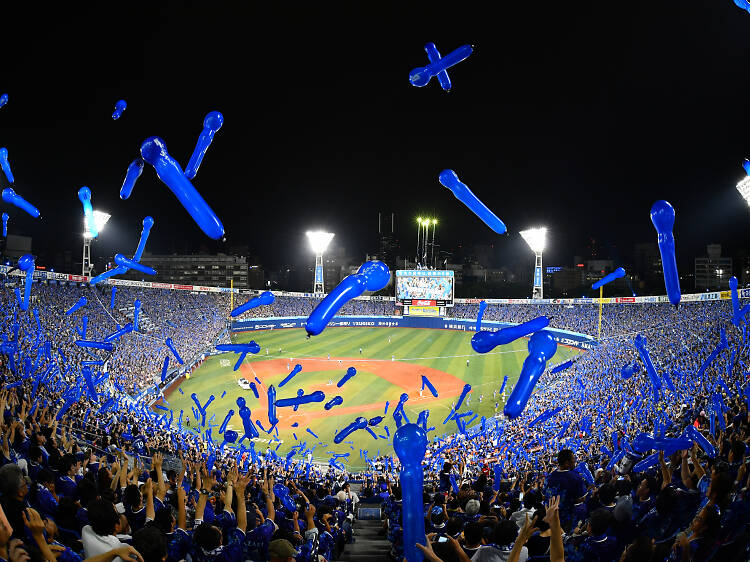 8. Watch a ball game over beer

The home ground of the professional baseball team Yokohama DeNA Bay Stars, Yokohama Stadium has a capacity for 35,000 people. Sip the team’s original brews, such as the Bay Star’s Lager, while enjoying the game and take in the slight sea breeze from the nearby Yokohama Port. Yokohama Stadium 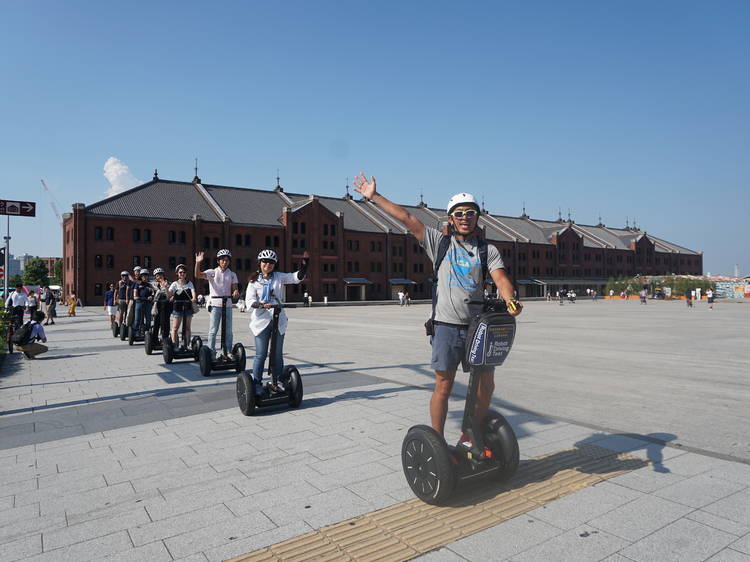 Hop on a Segway for a quick and convenient tour of Yokohama's seaside sights, including the Red Brick Warehouse, Kishamichi Promenade and Zou no Hana Park. All photos taken by your guide during the circuit can be downloaded for free later on, so you needn't worry about snapping while on the go. Note that you'll need an international or other driving licence valid in Japan to participate. Yokohama Segway Tour 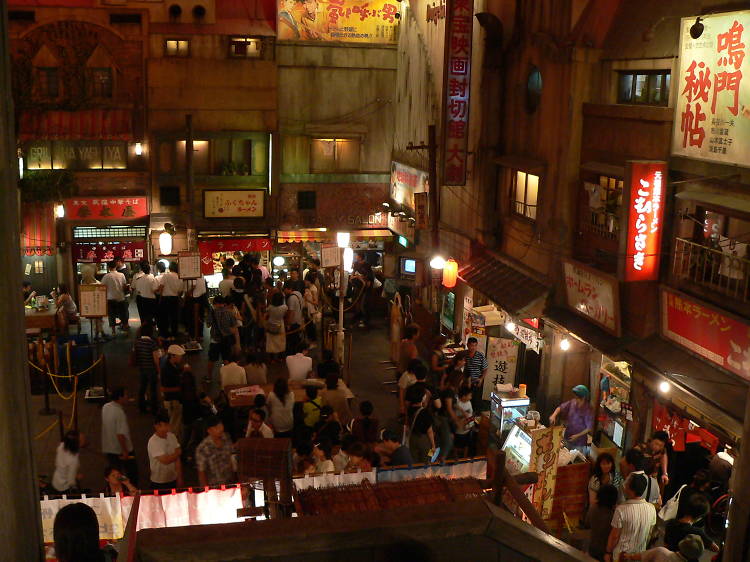 10. Taste ramen from all around Japan

The world's one and only ramen museum is actually more of an eatery/shop: you can sample ramen by seven different restaurants (including vegetarian options) from all over the nation, make your own noodles, and buy ramen-related utensils or instant ramen to enjoy at home. Shinyokohama Ramen Museum 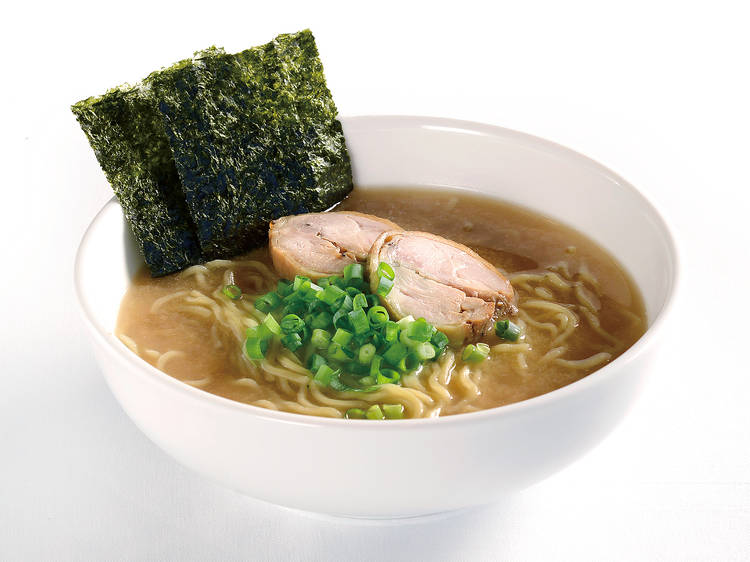 11. Seek out a Chinatown favourite

A safe choice for anything from dim sum to ramen, this Chinese eatery may be casual but makes no compromises when it comes to quality. Its popularity with Muslim travellers, who are welcome to use the in-house prayer room, stems from the wealth of halal options. Sario Heichin Saryo Chinatown 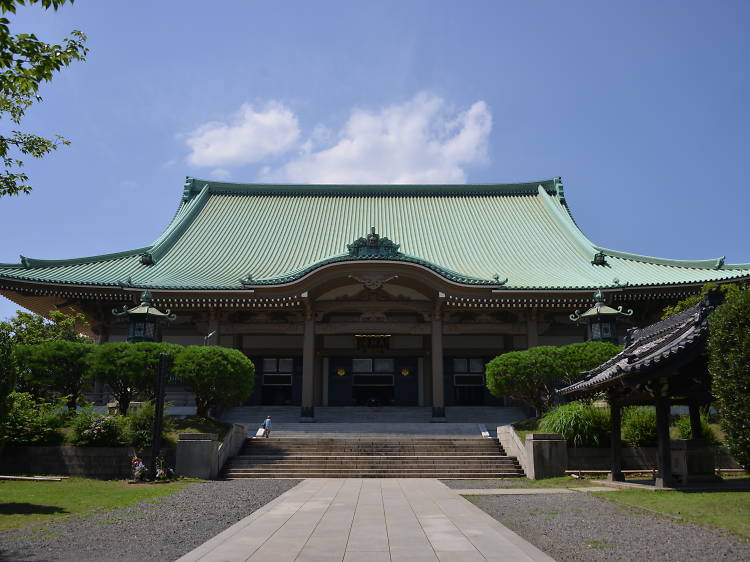 A safe choice for anything from dim sum to ramen, this Chinese eatery may be casual but makes no compromises when it comes to quality. Its popularity with Muslim travellers, who are welcome to use the in-house prayer room, stems from the wealth of halal options. Soto Zen Buddhism Daihonzan Sojiji 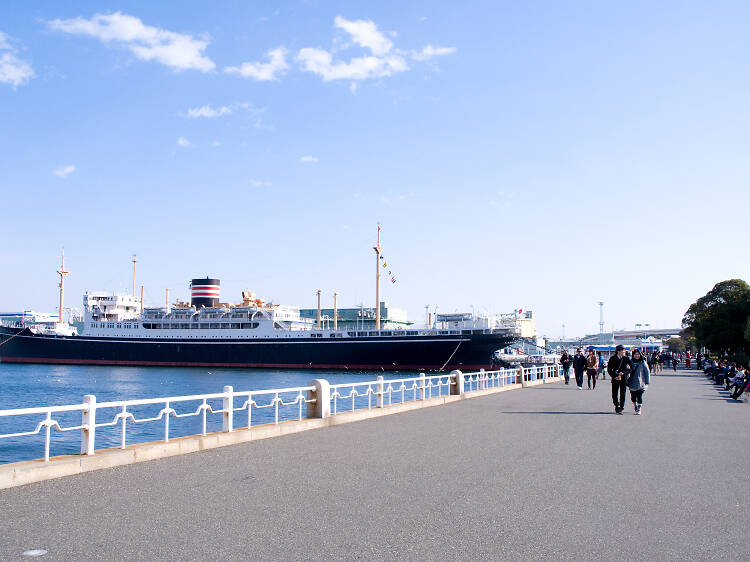 Verdant Yamashita Park is a popular dating spot. The statue in the middle depicts the Little Girl in Red Shoes, based on a Japanese song about the real-life story of Kimi Iwasaki. Born in 1902, she was adopted by American missionaries and thought destined for a life of luxury in the US. But, in fact, Kimi never left Japan: abandoned by her foster parents, she died alone, aged nine, of tuberculosis. Moored beside the park is the 1930s ocean liner Hikawa Maru, whose most famous passenger was Charlie Chaplin. Yamashita Park 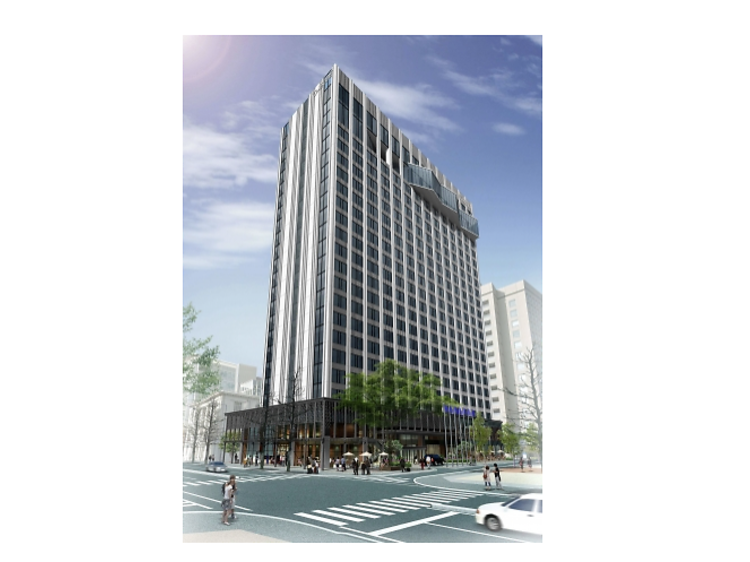 14. Stay where the action's at

The Hyatt Regency's new Yokohama hotel is a 21-storey building with several restaurants, a café, bar, fitness centre and all the other usual conveniences, located just a stone's throw from Yamashita Park. It's set for a May 2020 opening. Hyatt Regency Yokohama 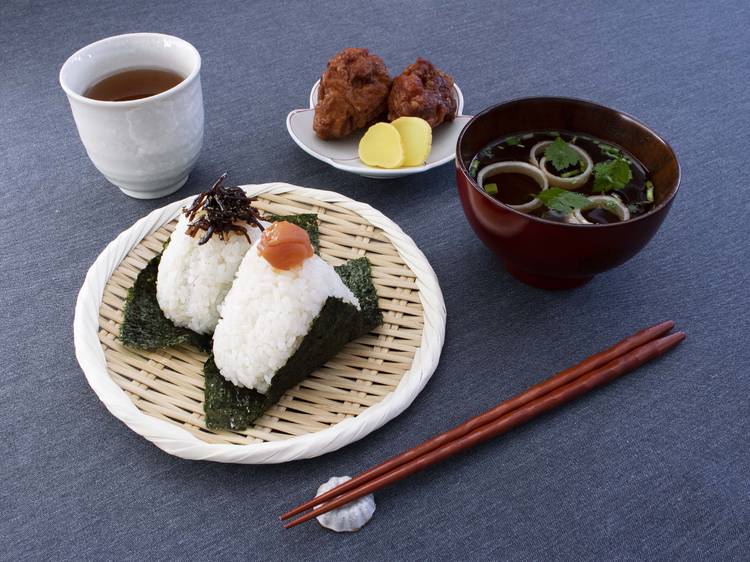 No convenience store rice balls here – the onigiri at Umeno are made only with brand-name Shimane prefecture rice, either white or brown, and can be customised with any of 14 toppings, including mentai-mayo and ginger kombu. You can combine your two-piece onigiri set (¥800) with a cup of tea. Onigiri Cafe Umeno 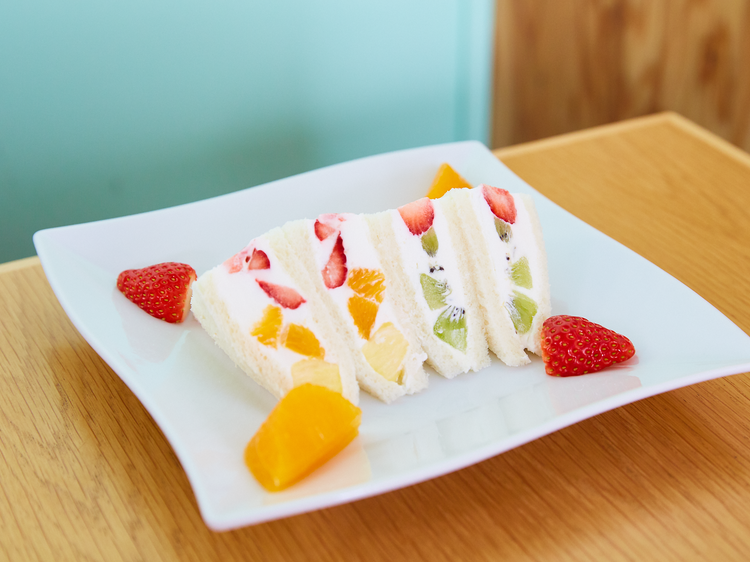 Seasonal parfaits, sandwiches and other fruit-filled, Instagram-friendly treats, courtesy of one of the city's most renowned greengrocers; when you're craving a fancy dessert, Mizunobu hits the spot. See anything with strawberry and/or peach? Don't hesitate – order it. Mizunobu Fruit Parlor Labo 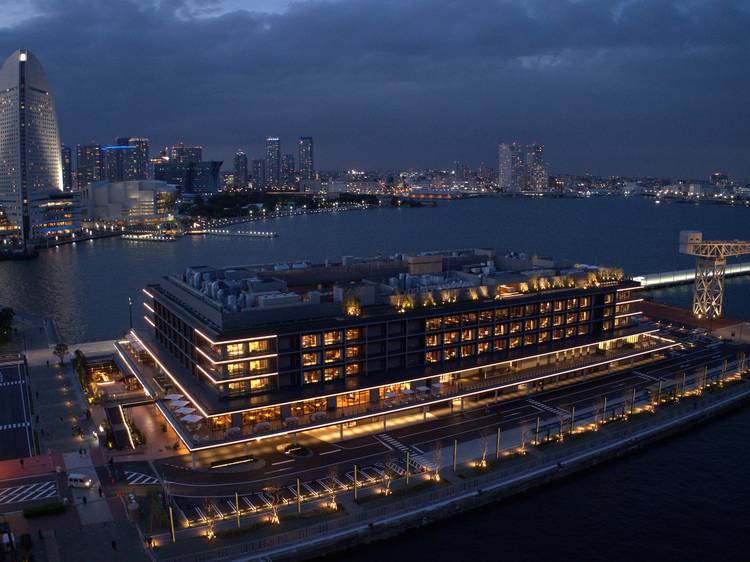 17. Dine above the waves

Adjacent to the city's international cruise terminal, Yokohama Hammerhead is a cluster of 25 restaurants that vary from local ramen shops to a brewpub complete with a terrace featuring enviable harbour views. Don't miss out on the Ariake Harbour soft serve ice cream, a local favourite available only here. Yokohama Hammerhead 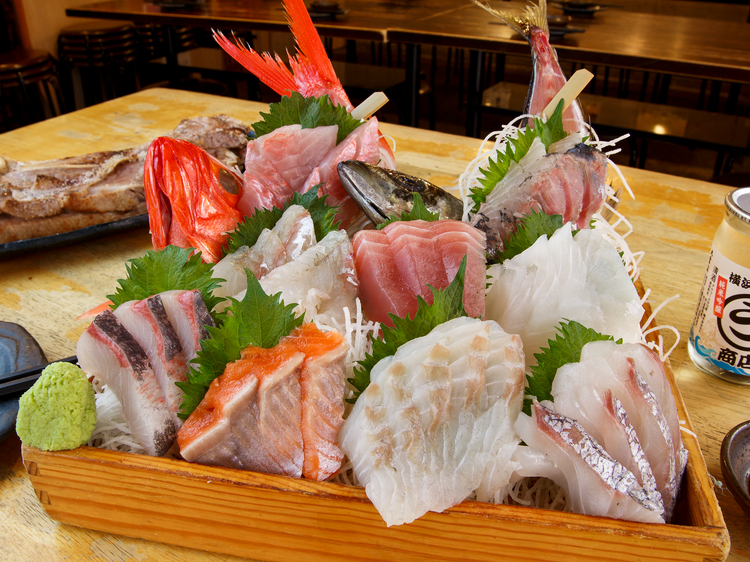 Look out – the sashimi here is served on tableware that appears far too small for the purpose, resulting in eye-catching piles of raw fish being ferried about by the wait staff. Combine your ultra-fresh seafood with a cup of sake, sit back, and take in the market-like atmosphere. Maruu Shoten 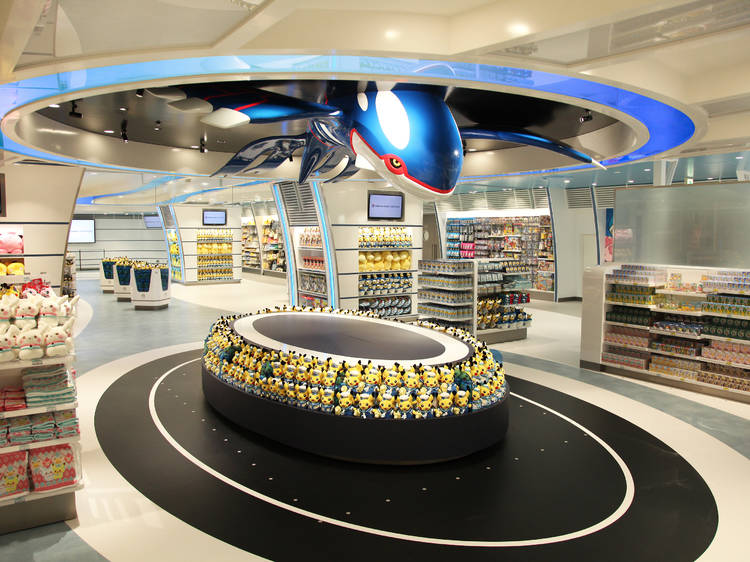 19. Make friends with Pikachu the sailor

Catching them all is now even more exciting at Pokémon Center Yokohama, which moved to its current, spacious perch in November 2018. Besides the usual plush toys, stationery, towels and other paraphernalia – a whopping 5,000 different items – the shop carries adorable Yokohama-only ‘Pikachu in sailor costume’ goodies. Pokémon Center Yokohama 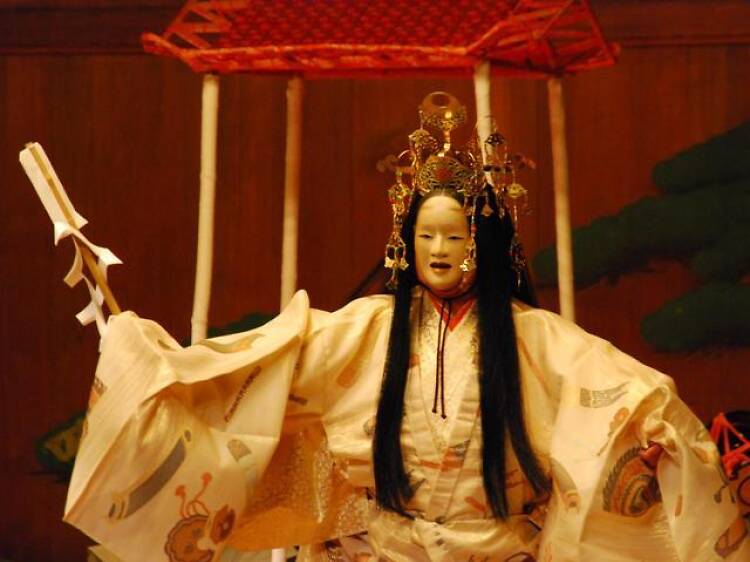 20. Watch the ancient art of noh

Noh and kyogen are both forms of classic drama and considered two of the world's oldest performing arts. Watch them here along with other traditional Japanese arts like Ryukyu buyo. The second Sunday of every month is Kyogen Day, when tickets go for just ¥2,200. Yokohama Noh Theater 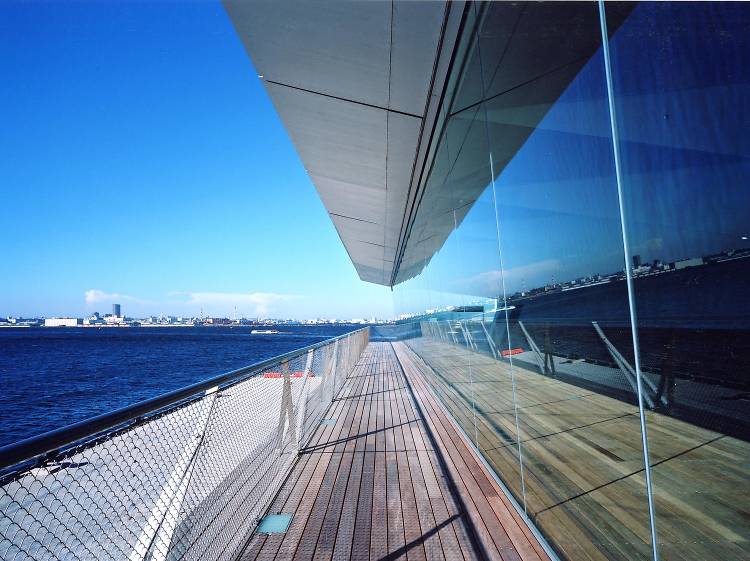 21. Gaze out from a ship-deck rooftop

Known as 'the whale's back' among locals, this international port sees passenger ships arrive and depart, but the real reason to visit is the sweeping view of Minato Mirai, the city’s seaside urban area. The rooftop is designed to look like a ship’s deck and invites you to linger longer with wooden pathways. Osanbashi Yokohama International Passenger Terminal 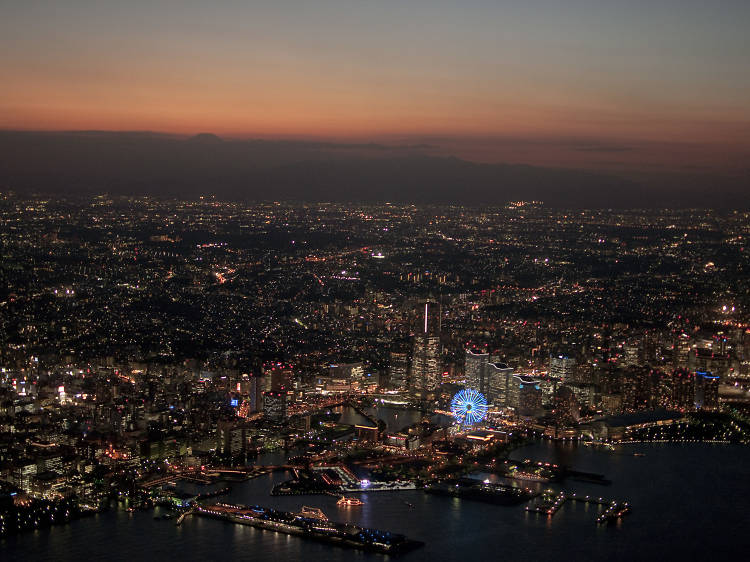 Yokohama is a port city packed with sightseeing tours – including this aerial one. Hop on a helicopter to get the best views ever and make your Yokohama experience unforgettable. Flights are offered on Fridays, weekends and holidays. Yokohama Sky Cruise 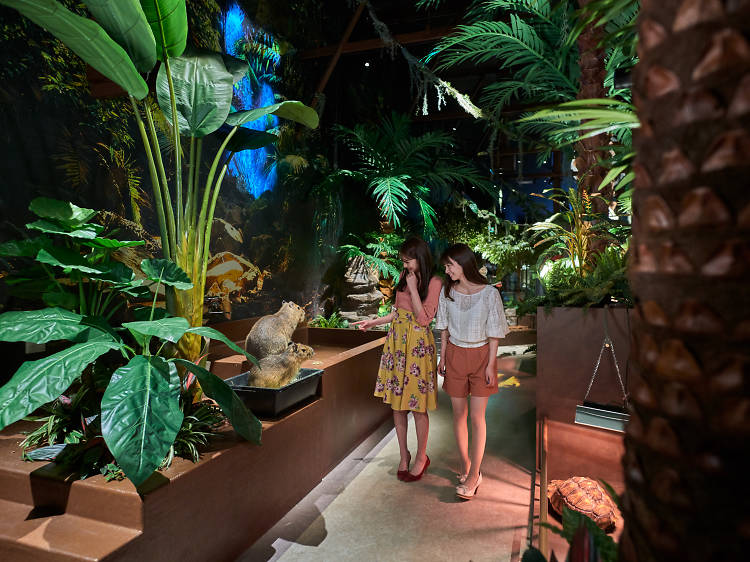 23. Jump into the jungle

Did you know there's a jungle in this port town? At Orbi Yokohama, Sega’s entertainment technology gives you the chance to experience the wonder of the wild with all your senses. Go on, pet a capybara or armadillo – if you dare. Orbi Yokohama 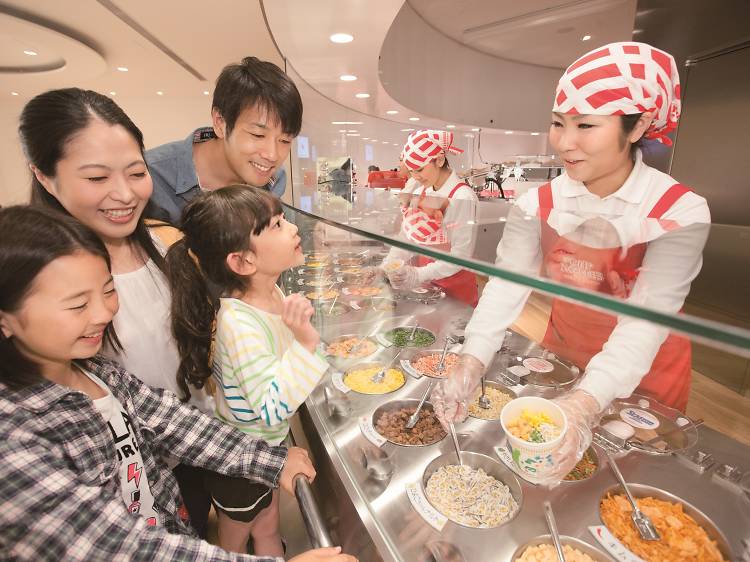 Instant noodles are big in Japan. At this interactive museum you get to have fun while learning about the creative-thinking process of Momofuku Ando, the inventor of instant noodles, by seeing, touching, playing and eating. You can also make your own original Cup Noodles at My Cupnoodles Factory. Cupnoodles Museum 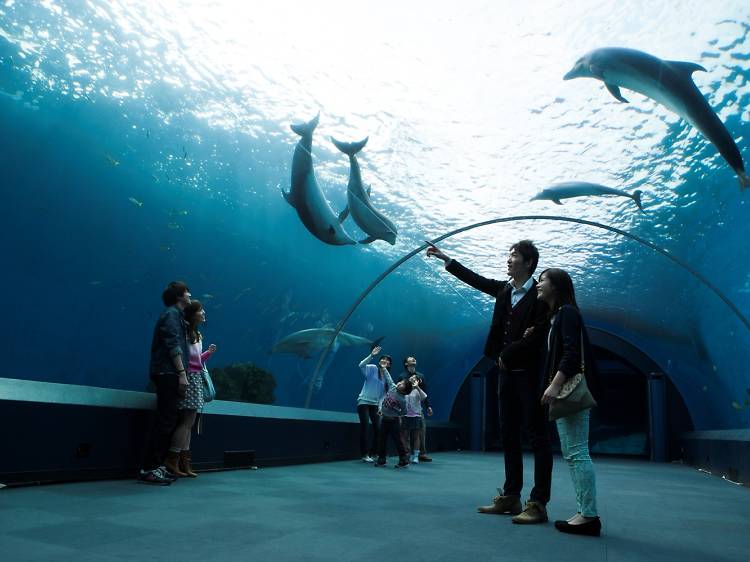 You can see more than 120,000 creatures large and small at the Aquamuseum and touch marine animals at this ‘leisure land’, which consists of an amusement park and aquarium. At the attraction area, don't forget to try the wild river adventure known as Aqua Ride. Yokohama Hakkeijima Sea Paradise 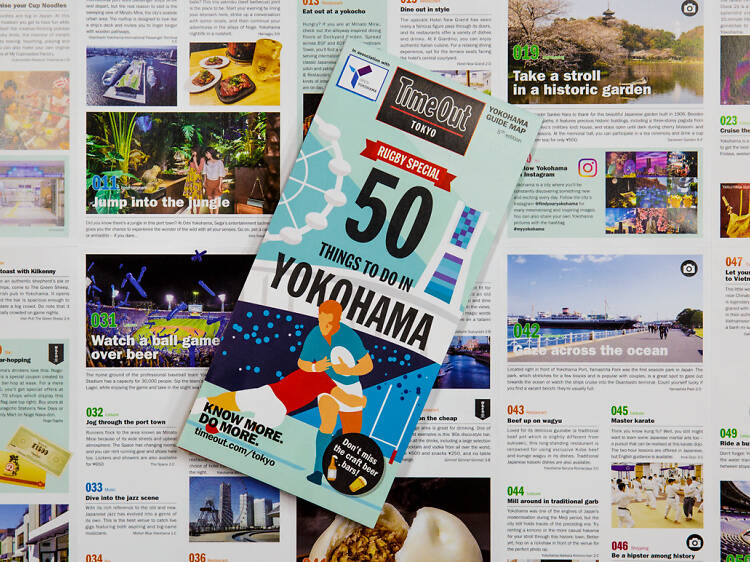 For more things to do in Yokohama, take a look at the city's official visitor's guide.

For places to stay and dine during the Rugby World Cup, click here.