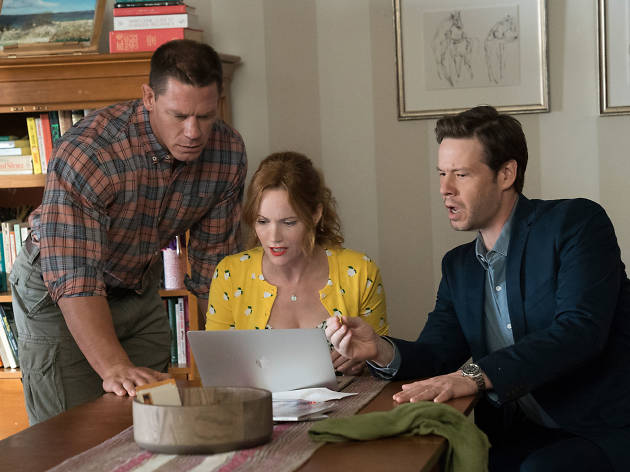 American Pie gets an update—and potentially even an upgrade—with this hilarious, parents'-eye view of teenage sexuality.

Proving once again—especially after last year’s Girls Trip and The Big Sick—that comedies are the undiscovered country for expert (if not Oscar-nominated) acting, Blockers gives the willowy, trembling Leslie Mann two bookends that are, without a doubt, her finest onscreen moments. In the first, she’s offering tame suggestions to her prom-bound, sex-minded daughter (“Mom, are you going to be okay?” the kid asks, legit concerned). In the next, the tears rain down Mann’s face like a shower with robust water pressure—is it even audible?—as she’s saying upbeat goodbyes to a child with college on the horizon.

In between those two scenes comes a wonderfully crude film (we're talking Superbad levels of raunchiness), but one in which the overall vibe is sweet: kids patiently waiting for their parents to grow up already. On the occasion of their daughters' big high-school dance, three fussy helicopter parents (Mann, Ike Barinholtz and a revelatory John Cena, a hulking, teary-eyed mess) become aware of their girls' plan to devirginize. Furious at this "sex pact"—it even has its own hashtag, #SEXPACT2018—the olds decide to mount a counteraction; the movie's title once had another word before Blockers, a synonym for rooster, before advertising standards kicked in.

Snappily directed by debuting director Kay Cannon (a screenwriter on the Pitch Perfect trilogy and, more substantially, TV’s 30 Rock), Blockers brews a bubbling panic among the parents, invading where they shouldn’t and brandishing their concern like fake IDs. Between butt-chugging and other weird sex games, they get into more trouble than they asked for—including a dark hotel room where Mann gains access that no mother should have, nor want. The three kids and their respective dates aren’t as well drawn, but the film finds an unexpected path (via a mysterious girl with green hair in a dorky cape) to notes of acceptance and even maturity. Mining uptightness for all its comic potential, Blockers comes down, proudly, on the side of the unblocked.