Movies, Action and adventure Now showing
3 out of 5 stars 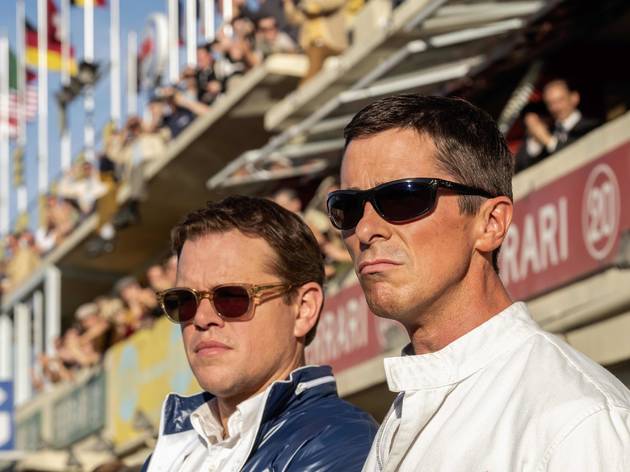 Sponsored racecar drivers feel the need for speed in a drama goosed by star power but slackened by corporate intrigue.

Matt Damon and Christian Bale, both returning to their boyish, likable modes, race cars and squabble like brothers in Ford v Ferrari, a ’60s period piece that works best when it stays on track (literally) in the crush of competitive pressure. Carroll Shelby (Damon), the inspired Texas car designer whose heart problems stalled his career behind the wheel, and Ken Miles (Bale), the salty British-born driver who would come to dominate the field, were a real-life duo born to be at the center of a chatty action movie. Logan director James Mangold loads the drama up with banter in the style of Howard Hawks (Hawks’s own Red Line 7000 features Shelby’s cars) and even has the two men wrestling in the dirt while a wife patiently waits it out, a scene stolen from Red River.

The larger setup, though, reveals Ford v Ferrari to be one of those oxymoronic anti-corporate studio movies that tries to celebrate individuality while keeping things stiffly in the middle of the road. Henry Ford II (Tracy Letts) hopes to make a name for himself beyond his father’s reputation; he’s convinced by various suck-ups (Jon Bernthal and a clownish Josh Lucas) to take on Italy’s Ferrari at the 24-hour Le Mans showdown and, maybe, to recast the Ford Motor Company as something sleeker. (“Kids today, they want glamour, sex appeal,” says Bernthal’s Lee Iacocca.) This kind of intrigue around rebranding may play well for any stray marketers in the audience, but it’s a dull peg to hang a movie on; the film stalls whenever it’s trying to be Mad Men.

Thankfully, that’s not the entire focus (at one point, a fussy exec gets locked in an office while the movie has fun without him). Cinematographer Phedon Papamichael brings an electric clarity to the driving scenes, especially when Le Mans is pounded by a rainstorm and the whole idea of a nonstop race seems like a death wish. And Damon and Bale are unfailingly enjoyable company to keep, steering the psychology away from alpha-male dominance to something more complex and occasionally mystical. Bale makes a meal out of some spacey dialogue about the “perfect lap”; you can also hear him giddyap like a cowboy, grinning as widely as a little kid. No points for knowing who takes home the trophy, or for knowing which version of Ford v Ferrari—the half-smart business fable or the rough-and-ready bromantic adventure—ultimately wins you over.