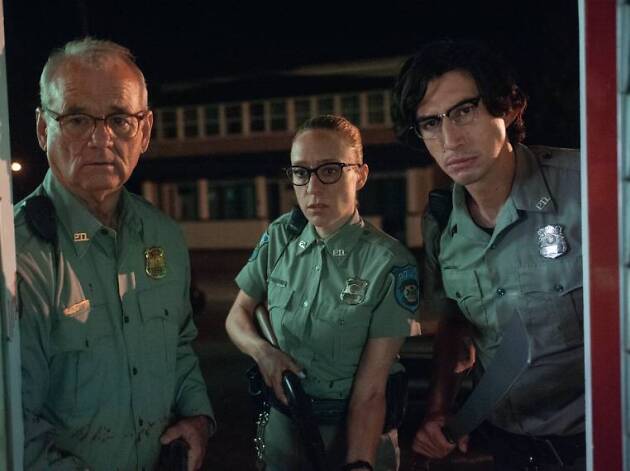 Even a killer cast and some glorious undead support can't elevate Jim Jarmusch’s baggy zom-com into the canon.

A languid, undercooked affair, writer-director Jim Jarmusch’s playful stab at the zombie movie returns the genre to the backwoods America of George Romero’s seminal Night of the Living Dead and gives it a half-meta reworking. It sprinkles in an ensemble cast to die for, bursts of OTT flesh-chomping gore, nods to zombie classics (look out for Living Dead’s 1967 Pontiac LeMans) and a few big laughs, but its zeitgeist-y concerns and self-conscious final-act twists don’t quite land. It’s a love letter to zombie movies typed in Comic Sans, and it reminds you that Jarmusch’s best work has an invisible rigor, even at its loosest. Sadly, that’s missing here.

In the spirit of Romero, the undead apocalypse arrives in the Midwestern town of Centerville via interrupted radio signals, daylight that lasts too long and, most alarmingly for this rural spot, a missing chicken. Is the cranky hermit outside of town to blame? (He’s played by Jarmusch lucky charm Tom Waits, 50 percent gravel-voiced omniscience, 50 percent beard.) Disturbing news bulletins about fracking knocking the Earth off its axis point to a bigger story. But at the urging of an obnoxious MAGA type (Steve Buscemi), cops Cliff Robertson (Bill Murray) and Ronnie Peterson (Adam Driver) investigate, with the latter oddly certain that it all points to an invasion of the undead. Sure enough, said invasion arrives, presaged by a zombie Iggy Pop and a particularly chewy scene at the town’s diner.

The shufflers themselves are a blast. There are moments of “Thriller” music-video–like choreography, but mostly they lumber enjoyably around town taking down the cast one by one, in scenes given a luminous glow by cinematographer Frederick Elmes’s nocturnal lighting. The twist is that the zombies don’t crave flesh so much as their once-living selves’ obsessions: coffee, music, candy, Xanax—you name it, they groan for it. One hilarious scene sees a group lurching around pining for Wi-Fi in the manner of, well, all of us. And you haven’t lived until you’ve seen a zombie Carol Kane demanding “Char-donn-aaay!” over and over again.

None of it quite coalesces, though. Jarmusch is a past master at drawing comedy from the space around his actors: the pregnant pauses that seem to last a beat too long, the scenes that settle in almost to the point of inertia before suddenly delivering a killer payoff or poignancy. But those magic moments are missing from too many of The Dead Don’t Die’s scenes, which fade without gleaning a laugh or moving the story forward. It’s a frustration with a cast this good. Even Murray, a Zen master of this kind of loose-limbed comedy, struggles to mine gold. Driver fares better, mainly for reasons that become clear late in the film, while Chloë Sevigny is relegated to the role of a scaredy-cat fellow cop.

Despite the OCD zombies, the satire in The Dead Don’t Die doesn’t add up to a sharp-edged laceration of human monotony or environmental destruction. Shaun of the Dead delivered the same jabs with more zest—as did Romero, of course, with more political edge—although Jarmusch does have some fun with his heroes’ struggles with the rules of the genre. One blackly funny scene has them trying to figure out whether they need to decapitate a freshly gnawed motel guest (Selena Gomez).

The undisputed highlight, though, is Tilda Swinton’s sword-wielding Scottish mortician. Channeling David Bowie in The Man Who Fell to Earth, she brings glazed detachment, some lethal finishing moves and the odd cadence of someone who, sooner or later, will want to be taken to someone else’s leader. “She’s strange,” notes Ronnie. “She’s Scottish,” replies Cliff. Welcome to Night of the Living Deadpan.