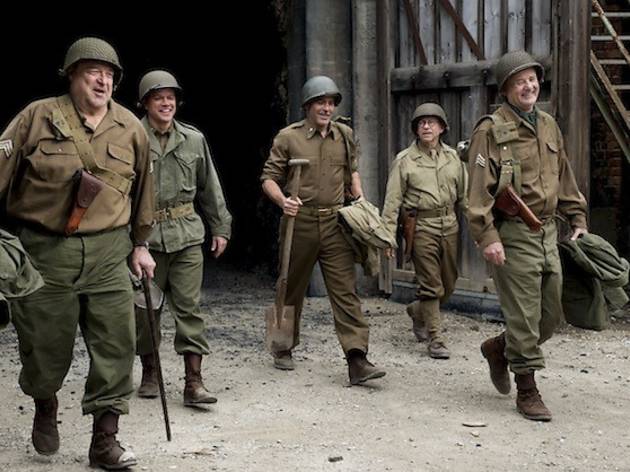 What price art? Multihyphenate George Clooney’s true-life WWII adventure—a frustrating tonal mishmash—puts the question up front, as curator and conservationist Frank Stokes (Clooney) lays it all out for President Roosevelt: Hitler and his cronies have stolen tons of the great works (Picasso, Vermeer, Van Eyck), and it’s imperative to retrieve them. “If you destroy an entire generation of people’s culture, it’s as if they never existed,” he says to a skeptical FDR, who’s more concerned with flesh and blood than he is with oil on canvas. Still, the POTUS permits Stokes to convene a ragtag team of operatives to salvage what they can as U.S. forces push in from Normandy.

You might think you’re watching Stripes as opposed to Saving Private Ryan, as the group gathers for a broadly comic basic-training sequence. Here are the out-of-shape Ugly Americans (Bill Murray, John Goodman and Bob Balaban). There is the Englishman (Hugh Bonneville) tempted by drink, the Frenchman (Jean Dujardin) with the slyly salacious grin, and the green German expat (Dimitri Leonidas) who proves himself a battlefield asset. And finally comes an especially bland Matt Damon, as an art restorer trying to woo resistance fighter Cate Blanchett (doing her Kate Hepburn in The Aviator with a Gallic burr).

Things don’t exactly improve once the action shifts entirely to European soil. Ostensibly funny interludes like Murray and Balaban’s culture-clash encounter with a rogue SS soldier bump uneasily against rank sentimental scenes, such as a remember-home montage cringingly scored to “Have Yourself a Merry Little Christmas.” Yet Clooney occasionally shows a surer hand: He gets great work from Downton Abbey’s Bonneville—notably in an emotionally charged scene revolving around Michelangelo’s Madonna of Bruges—and has a fine monologue himself, in which Stokes dresses down a high-ranking German commander (a moving encapsulation of the American spirit at its best). You wish that sober confidence extended to the rest of the film, which is otherwise content to be another slipshod and banal, if always watchable, Hollywood co-opting of history.