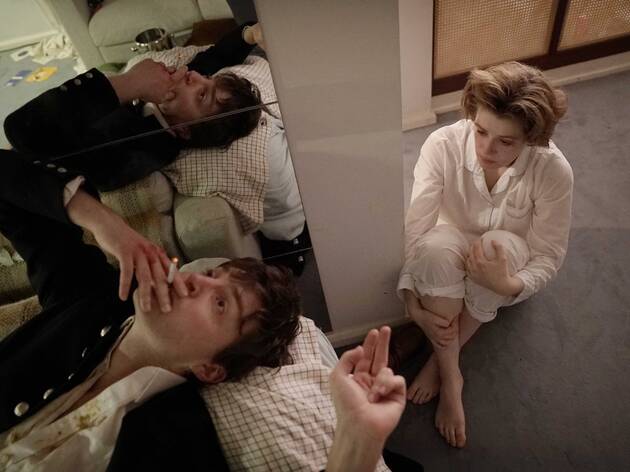 Writer-director Joanna Hogg dredges up bad romance in this ravishing reminiscence of her early film-school days.

A cinematic memoir of once-in-a-decade emotional precision and ambition, Joanna Hogg’s The Souvenir does many things so exquisitely, it’s hard to know where to begin. Hogg, a veteran British TV and feature director with a distinctly intimate style, graduated from film school in the 1980s; her fantasy thesis project starred a then-unknown Tilda Swinton (already magnetic) as a character whose obsession with fashion results in a glamorous plunge into a magazine spread.

Now, completing a cosmic circle, Hogg casts the Oscar-winning actor’s daughter, Honor Swinton Byrne, to play an autobiographical version of herself as a young film student peering through spring-loaded Bolex cameras and awakening to the pleasures and heartaches of early ’80s London. (Mama Swinton is on hand too, as Hogg’s elegant, concerned mother.) To watch Swinton Byrne’s 24-year-old Julie—angelically innocent, soft in voice, a touch embarrassed by her Knightsbridge privilege—is to make the kind of immediate, heart-to-heart connection with an actor that only the movies can broker. (Call Me by Your Name’s revelatory Timothée Chalamet was another.)

Julie is still childlike enough to shower kisses on the family dog. But she’s turning serious, typing out her script ideas, interviewing earnestly with the graying, judgmental professors, mixing it up during class discussions of Psycho. The world of film school, a crucible of naivete and competition, has never been presented with quite as much clarity as Hogg musters here; the director is also self-deprecating enough to show herself as an awkward amateur, bumping into the lighting equipment. Her instinct is to let Swinton Byrne fill these scenes with thoughtfulness, a call that pays off beautifully.

And still, that’s not nearly the half of what The Souvenir is. An older man, Anthony (Tom Burke, wryly funny while charting a devastating descent), enters into Julie’s life, first as a worldly adviser and spouter of pretentious come-ons, then as a sharer of books and bed. Their relationship blooms with respectful sweetness, so it’s a shock when, at a dinner party, the host (a perfectly preening Richard Ayoade, clicking the entire movie into place in a single scene) leans over to Julie and confides, “You don’t seem druggy to me.” He’s honestly curious about how it works between a “habitual heroin user” and a “trainee Rotarian.” We’re thrown as much as Julie is. For all of Anthony’s surface charms, he’s changed in our eyes.

Hogg then dives into what might have been a fairly traditional junkie drama, but she's blessed by a unique sense of compassion that stems from personal betrayal. Even though Stéphane Collonge’s gorgeous production design decks everything out in the soft pinks and whites of a 1980 bedroom (plus a righteous soundtrack of XTC, Elvis Costello and Joe Jackson), the film still squirms with self-destructive tension. The couple escapes for a Venice vacation, but despite their fancy-dress excursions and an accordion wafting in the air, Julie is in tears, sensing that something is off. Swinton Byrne and Burke are magnificent in these scenes, tender and exposed, and though we flinch protectively for the teller of this tale, Hogg turns her story into a gift of haunted empathy. A sequel is already in the works; when it arrives, you’ll still be wrecked by this one. While it’s unspooling, The Souvenir feels like the only film in the world—the only one that matters.