Send out the clowns: Why we should ban clowns altogether

As a general rule, I am against judging entire groups of people because of the bad behavior of just a few in that group. That way potentially lies racism, bigotry and a number of other deplorable things.

I break this general rule, however, when it comes to clowns. Because as another general rule: clowns are the fucking worst. And I've yet to see that rule broken. 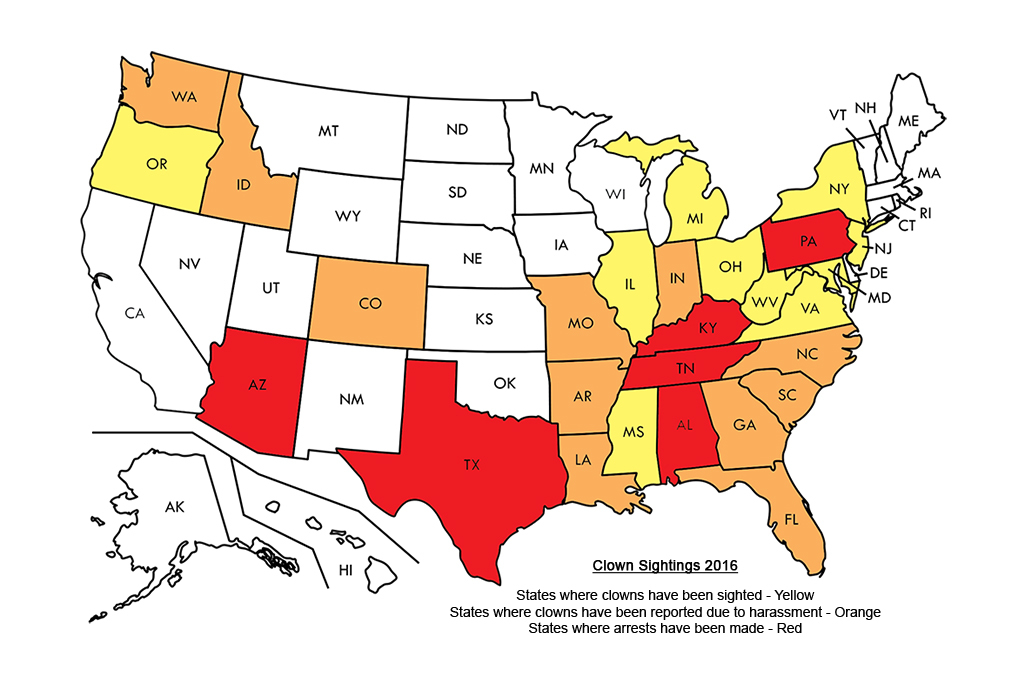 The recent spate of creepy clown sightings across America has reminded us all that clowns can be terrifying. If you aren't aware of this spate, here are the Cliff's Notes: Across multiple states (check out our nifty map above), people dressed as clowns have been appearing at the edges of woods beckoning little children; mysteriously hanging around at cemeteries; jumping out in front of drivers' headlights; and standing outside laundromats staring at people...just because.

The "Clown Panic" of 2016, as some are calling it, traces back to an apartment complex in Greenville, South Carolina, where there were multiple clown sightings in and on the outskirts of the nearby woods.

More than a reminder that the masked ones can be creepy, however, the clown panic is a confirmation that clowns are creepy. Always. Inherently. And they must be stopped.

Can you name a non-scary clown? A clown that evokes joy and laughter and not even one get-me-the-hell-out-of-here shudder? Ronald McDonald? Horrifying. Krusty the Clown? Keep the kids away. IT? John Wayne Gacy? That tobacco-smelling guy who kept on accidentally popping the malformed animal balloons he was making at your sixth birthday? (Never forget.)

Even old-school clowns have serious creep-game. There is a great deal of artistry to the work of Emmett "Weary Willie" Kelly, for example, who's mope-faced hobo-inspired clown mixed sympathy with laughs for Depression-era circus-goers. But undergirding it was always the sense of something sinister. And then there's this pic of him in a bubble bath.

Weirdness, even creepiness, in and of itself is not something we should censor. Indeed, we should celebrate it. But there is something primordial about the creep buttons clowns manage to push. Why are they hiding we wonder? Do you need to be wearing that much makeup to juggle balls?

Rami Nader, who studies the fear of clowns, expressed it like this in a recent CNN piece tied to the clown panic: "They seem to be happy, but are they really? And they're mischievous, which puts people constantly on guard. People interacting with a clown during one of his routines never know if they are about to get a pie in the face or be the victim of some other humiliating prank. The highly unusual physical characteristics of the clown (the wig, the big red nose, the makeup, the odd clothing) only magnify the uncertainty of what the clown might do next."

Which would all be fine if clowns still served a real purpose. But kids don't like them. Kings no longer need jesters. And circuses are moving increasingly towards spectacle over slapstick. Our real clowns now live in our Netflix queue, without the wigs and white makeup and doll-get-up, revealing their stories in comedy specials and zippy sitcoms.

So, let's not waste this national moment of fear. That would be plain un-American. It's time to call for an end to clowndom. In the cemetery. At the edge of the woods. And at your next kids' party.