Pittsburgh investment banker and industrialist Andrew Mellon was born the son of a poor Irish immigrant but went on to serve as US Treasury secretary from 1921 to 1932. In 1941, he presented the National Gallery’s West Building as a gift to the nation. Mellon’s son, Paul, created the gallery’s East Building in 1978. Mellon junior, who had donated over 900 artworks during his lifetime, bequeathed $75 million and 100 paintings—including works by Monet, Renoir and Cézanne—on his death in 1999.

In designing the Tennessee marble West Building, architect John Russell Pope borrowed motifs from the temple architecture of the Roman Pantheon. The white marble stairs at the Constitution Avenue entrance lead to the main-floor rotunda, with its impressive green Italian marble floors and columns around a bubbling fountain encircled by fragrant flora and greenery. On this level, galleries lead off the building’s 782ft longitudinal spine. The ground level houses galleries as well as a gift shop and garden court café. An underground concourse has a cafeteria, another shop and a moving walkway that connects the West Building to the skylit, IM Pei-designed East Building.

West Building
The West Building’s skylit main floor covers European and American art from the 13th to the early 20th centuries. Exhibits begin in gallery 1 with Italian Gothic works 1270–1360, among them Giotto’s seminal Madonna and Child. Pre- to high Renaissance Italian works represent a large proportion of the collection; highlights include Leonardo da Vinci’s almond-eyed portrait of Ginevra de’ Benci (gallery 6) and Botticelli’s Adoration of the Magi. Giovanni Bellini and Titian’s Feast of the Gods commands Gallery 17, to the north of the West Garden Court.
Late medieval Flemish highlights include Jan Van Eyck’s Annunciation (gallery 39). Unmistakeable among the Netherlandish works 1485–1590 in gallery 41 is Hieronymus Bosch’s Death and the Miser.
Spanish, Dutch, Flemish, French and German works of the 17th century also have a large presence (galleries 29–34, 36, 37, 42–51). Among them are works by Vermeer (Woman Holding a Balance, in gallery 50A) and Rembrandt’s 1659 self-portrait, with his intense gaze, in gallery 48.
On the east side of the Rotunda, there’s 18th- and 19th-century Spanish painting (gallery 52), including Goya’s The Marquesa de Pontejos. Highlights among the French paintings of a similar era in galleries 53–56 include work by Jean Simeon Chardin in gallery 53 and Jacques-Louis David’s The Emperor Napoleon in his Study at the Tuileries (gallery 56). British landscapes by Turner and Constable are in gallery 57, among them Turner’s Keelmen Heaving Coals by Moonlight, while gallery 58 is devoted to portraits by Gainsborough and Reynolds. Galleries 60–60B and 62–71 are the American rooms. Among the works are naive paintings in gallery 63, immense and idealised 19th-century landscapes, such as Thomas Cole’s A View of the Mountain Pass Called the Notch of the White Mountains (gallery 64). George Catlin’s distinctive American Indian portraits are in gallery 65. American Impressionism 1860–1925, in gallery 70, includes John Singer Sargent’s Repose. Early 20th-century American painting in gallery 71 includes Edward Hopper’s Cape Cod Evening. Galleries 80–93 feature 19th-century French work.
Downstairs, the West Wing sculpture galleries, which occupy the entire north-west quadrant of the building’s ground floor, now register 24,000sq ft divided into 22 galleries, following a major expansion in 2002. More than 900 works are on view, including masterpieces from the Middle Ages to the early 20th century. Visitors entering from the museum’s 6th Street entrance encounter sculpture by Auguste Rodin and Augustus Saint-Gaudens. From there, they move in reverse chronological order from the 19th century to the Middle Ages, with detours into a pair of galleries housing early modern sculpture. Highlights of the collection include Leone Battista Alberti’s bronze Self-Portrait plaque (c1435); Honoré Daumier’s entire bronze sculptural oeuvre, including all 36 of his caricatures of French government officials; and the world’s largest collection of Edgar Degas original wax and mixed-media sculptures.
The Micro Gallery, just inside the West Building’s main-floor Mall entrance, has 15 individual cubicles with touch-screen color monitors where visitors can learn more about individual works, movements, artists and the precise location of each work. Conservation techniques are also explained.
The concourse tunnel to the East Building takes you on a moving walkway through what seems like a fantastic journey through the Milky Way; swathes of starry lights seem to ebb and flow above you. Called Multiverse, the installation is the work of American artist Leo Villareal.

East Building
The East Building’s triple-height, skylit atrium is dominated by Alexander Calder’s 32ft by 81ft aluminium and steel mobile. The gallery’s small but strong collection of modern and contemporary art includes several must-sees on view in the concourse-level galleries. Don’t miss Barnett Newman’s minimalist Stations of the Cross, a 15-panel installation of monochromatic paintings that ring the walls of a dedicated room (gallery 29A). Salvador Dalí’s Sacrament of the Last Supper hangs in the mezzanine elevator lobby. The East Building devotes much of its space to temporary exhibitions.
Sculpture Garden
The gallery opened a sculpture garden in 1998 on a six-acre square across 7th Street from the West Building. Designed by Philadelphia landscape architect Laurie Olin, the garden’s circular fountain bubbles in summer, and is transformed into an ice rink in winter. Among trees are Louise Bourgeois’s 10ft bronze cast Spider, whose spindly legs span 24ft, Sol LeWitt’s 15ft concrete Four-Sided Pyramid, and Tony Smith’s stout Moondog. 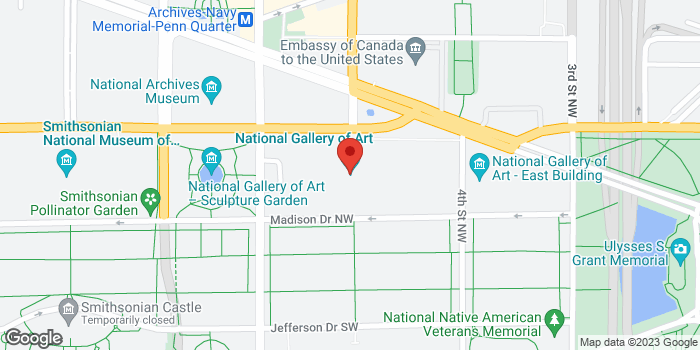