Dragons in Barcelona and where to find them

'Here be dragons', a warning seen on ancient maps to refer to dangerous or unexplored lands, could also apply to modern-day Barcelona. According to the gorgeous book 'Drakcelona' (Arola, 2011), by photographer Josep Martínez, Barcelona features up to 400 dragons in artistic and archictectural elements around town. The symbology of the dragon is the complete opposite in the rest of Europe, where the dragon represents evil, demons, and an opponent to be vanquished as it awaits us in the underworld.

In the Far East it's a solar and fertile power, a bearer of life, and a connection between the sky and the earth. But thanks to the abundance of dragons in Barcelona – and the amicable relationship between beast and metropolis, which may have been forged in the days when the city was known as the Rose of Fire – it can be said that Barcelona loves dragons and features them in privileged places and from important times in the city's history. You'll find dragons adorning buildings erected during great moments of strength, such as when the city was enriched with the rise of the bourgeoisie, and in the design era of Barcelona in the late 20th century. Benign or evil, the dragon is wise: if you look overhead and search patiently for scales, claws and fangs, you'll discover a hidden city, in a frequency of reality that's ever so slightly different from the daily commotion. Get out there and do some dragon hunting! 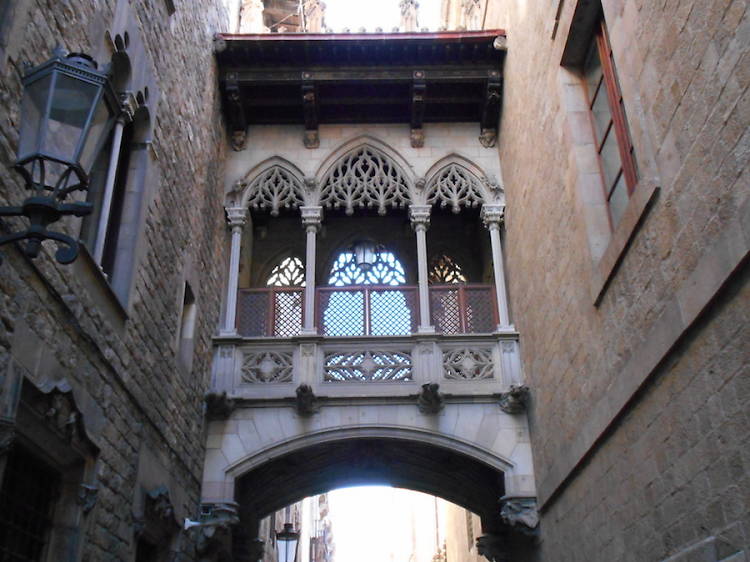 Through the streets on foot

They're very close to you, all you have to do is get closer to them. In C/ del Paradís, a sort of combination cul-de-sac and curve behind the Palau de la Generalitat, among souvenir shops and craft beer bars, a lovely and stony Sant Jordi (Saint George) is chiseled into the wall caught in his famous act of slaying the dragon.

The Renaissance façade of the Palau de la Generalitat is presided over by a majestic statue by Andreu Aleu depicting the triumph of Catalonia's patron saint, Sant Jordi, over the dragon. This is the most obvious element of a building with its fair share of dragons, among them the sculpture by Frederic Galcerà at the fountain in the 'pati dels Tarongers' (Orange tree patio) and the gargoyles in the same courtyard. Representing the triumph over the dragon is important for an institution that has endured (and continues to endure) draconian economic and political suffocation. 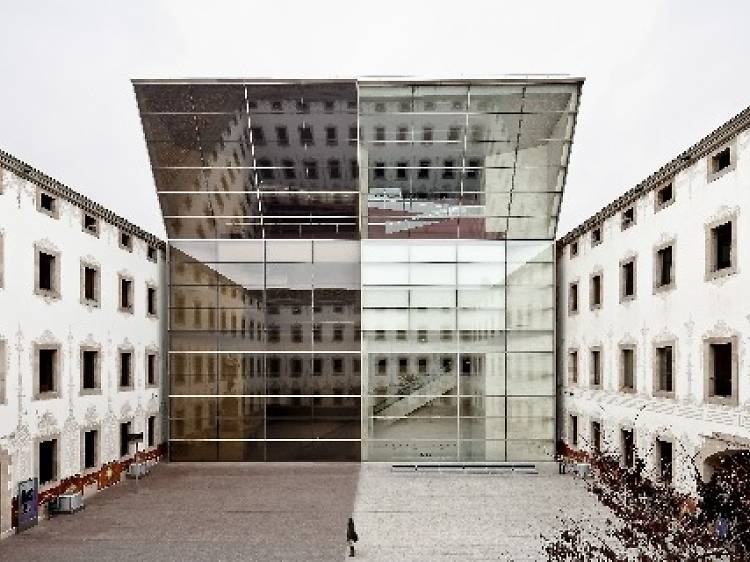 Saint Michael and the Beast

At the entrance of the 'Casa de la Caritat' – which today is the Centre de Cultura Contemporània de Barcelona – you'll be greeted by a beautiful alcove that houses a bronze sculpture of Sant Miquel – you know it's not Sant Jordi because it's got wings – just about to stab the Luciferian beast for the final time before sending it into the great abyss. 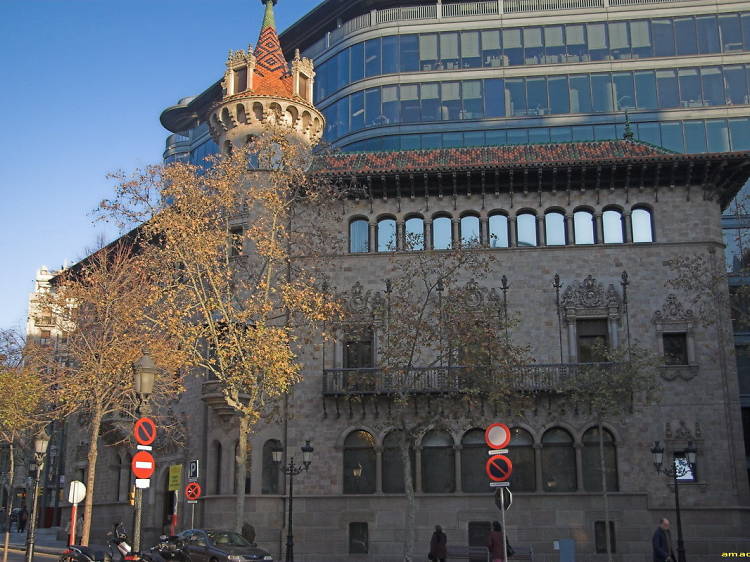 On the façade of Can Serra, the small modernista palace built by Catalan architect Josep Puig i Cadafalch, which is now home to the Diputació de Barcelona (council offices), you'll find a very expressive high relief sculpture that depicts Sant Jordi and the dragon looking each other over very closely as neither of the opposing forces prevails. 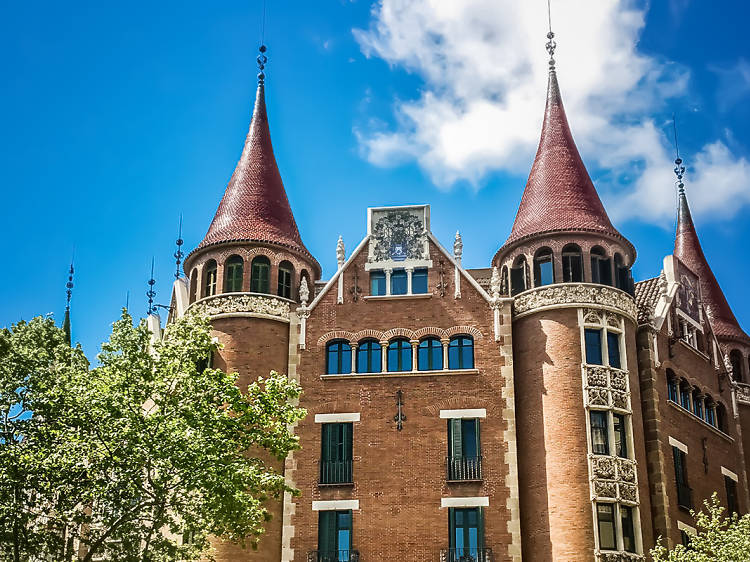 The Casa de les Punxes boasts a mosaic ceiling that features Sant Jordi as an ultracool and slightly disgruntled saint treading on a furious dragon, and a legend that reads: 'Patron saint of Catalonia, give us back our freedom'. In this mansion you'll even find a museum dedicated to Sant Jordi's great battle.

Someone's knockin' on the door

The meaning of a door knocker in the form of a dragon should be fairly obvious: be careful if you approach with bad intentions, because there's a dragon guarding the house. Although this one does look rather puzzled.

A bit farther down Verdi you'll find this functional, stylised and elegant serpent door knocker, because there are two types of dragon knockers: heads with rings, and snakes or serpents.

Here's a bit of a scary take on a dragon door knocker on one of those big sturdy doors typical of the Eixample. This blind serpent-dragon seems to be saying 'Be sure you knock, because I bite.' 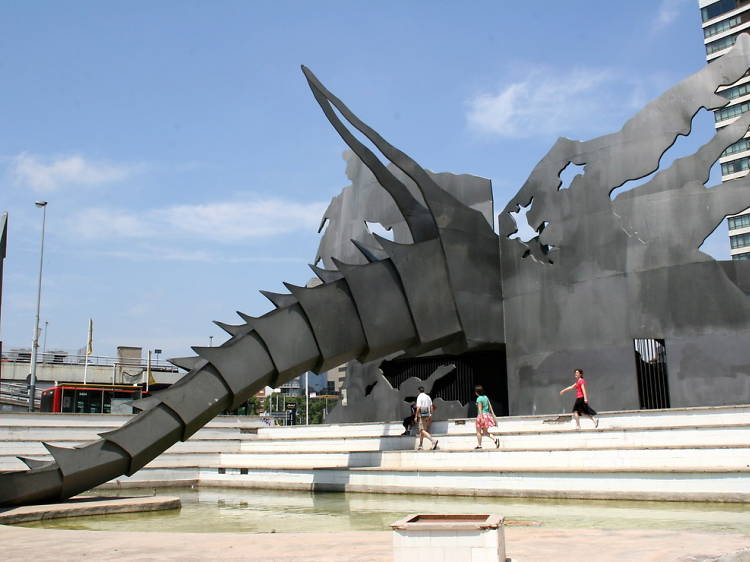 In the Parc de l'Espanya Industrial

The big draw in this park, which exists now thanks to the fight put up by the neighbours (back in 1974 it was apartment blocks), is the impressive dynamic sculpture by Basque sculptor Andrés Nagel. The dragon, made of steel sheets, weighs 150 tonnes and has two functions: it's a lookout point at the top, and it has three slides to come down. 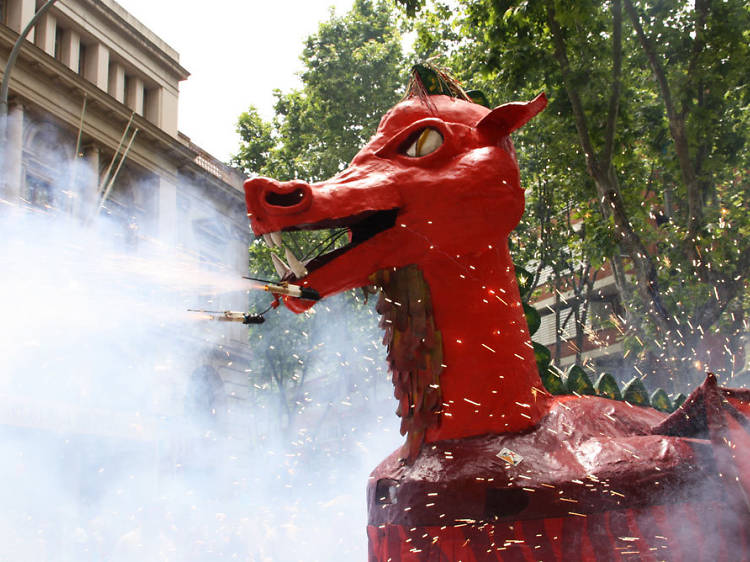 The crown jewel of the Sant Martí neighbourhood's festivals is its dragon family: the fibreglass Estarrufat with a bit of a punk hairdo; Víbria, upon whose generous breasts the children of Poblenou hang their dummies when they no longer need them; and the young Estarrufadet, a miniature version of Estarrufat. You can see all these dragons on display at the office of the Colla del Drac del Poblenou (Poblenou Dragon Group). 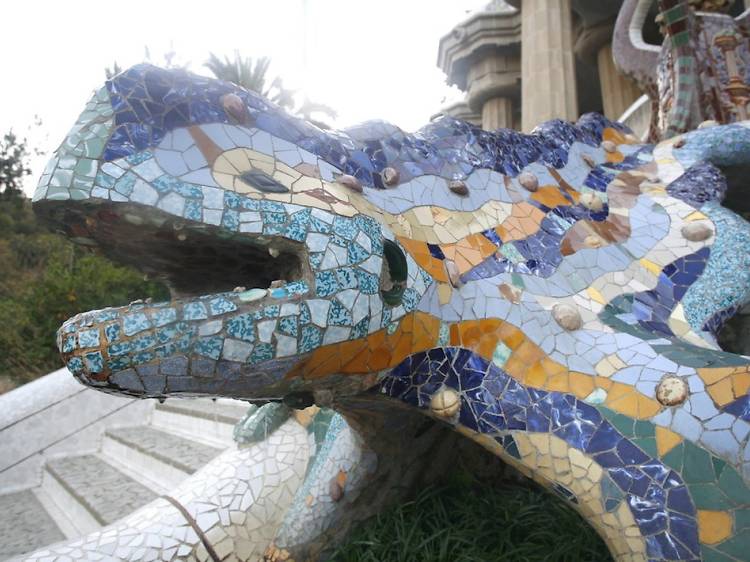 The dragon in Park Güell, a global image of Gaudí's mosaic work, is really a representation of Python, the serpent that in Greek mythology Apollo killed and buried beneath the Temple of Delphi. Today's reality is a bit less of a solemn affair: visitors to the park do whatever they feel like to the poor thing, but he never seems to complain. 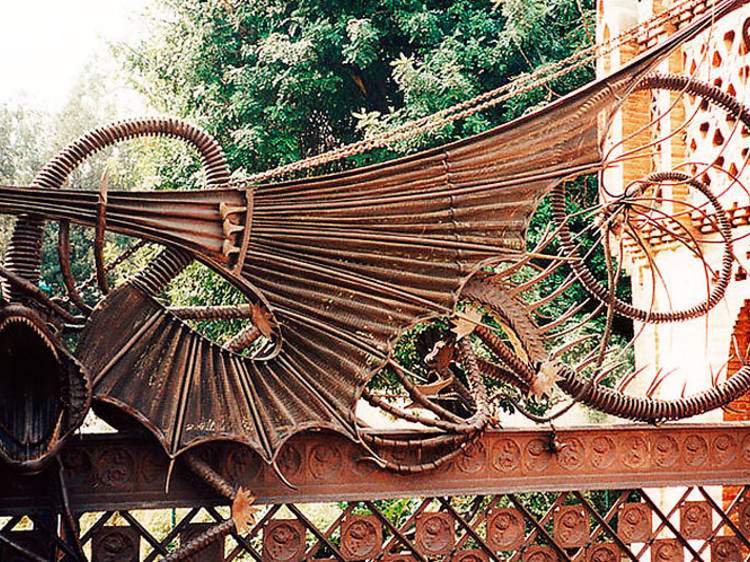 The Porta del Drac (Dragon Gate) at the Finca Güell features a dragon that forms part of a group of landscaped gardens which allude to the Garden of the Hesperides from 'L'Atlantida' by Catalan poet Jacint Verdaguer. The beast is made of wrough iron and bits of steel, and is depicted with its mouth wide open, like a trap for any hapless victim: if it came to life, visitors would be torn apart in two bites. It seems fitting that even more threatening are the dragons you come across at the Agència Tributària tax agency (Pg. de Josep Carner, 7). As if another sign were needed that you might not be in for such a good time when you pass through these doors. 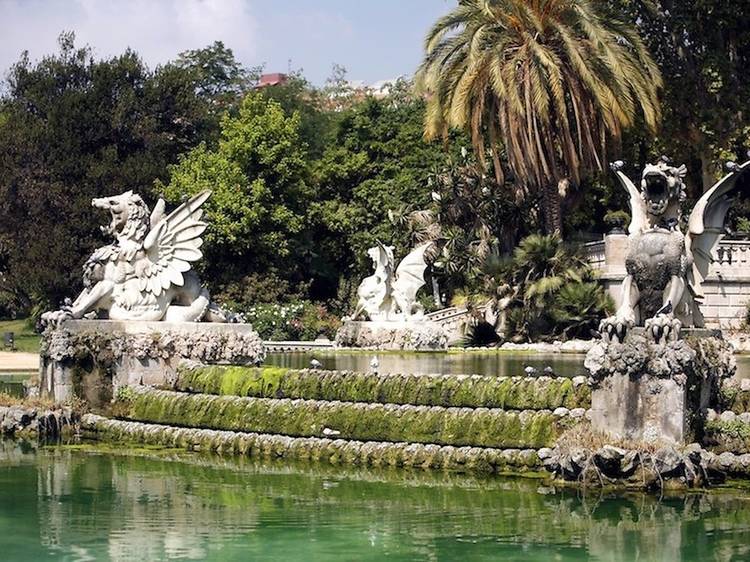 Everything's relative, of course: the Drac de la Font de la Cascada (Waterfall Dragon, pictured), which was created by Rafael Atché and stands in the Parc de la Ciutadella, is almost identical to the dragon that guards the Agència Tributària (see above) es prácticamente igual que los que custodian Hacienda: it spits water, and it has that inviting mix of eagle, lion and serpent. But, sure, you don't view a dragon awaiting you when you have to do your taxes the same as one that greets you when you spread out your picnic blanket.

If you're strolling through the Eixample neighbourhood and paying close attention, your senses might even be assaulted by horror in everyday elements on buildings along the way. Take for example the one that stands at C/Aribau, 61, where, above the Balinese spa, you'll see a gathering of ravenous gargoyles out of your worst nightmares. 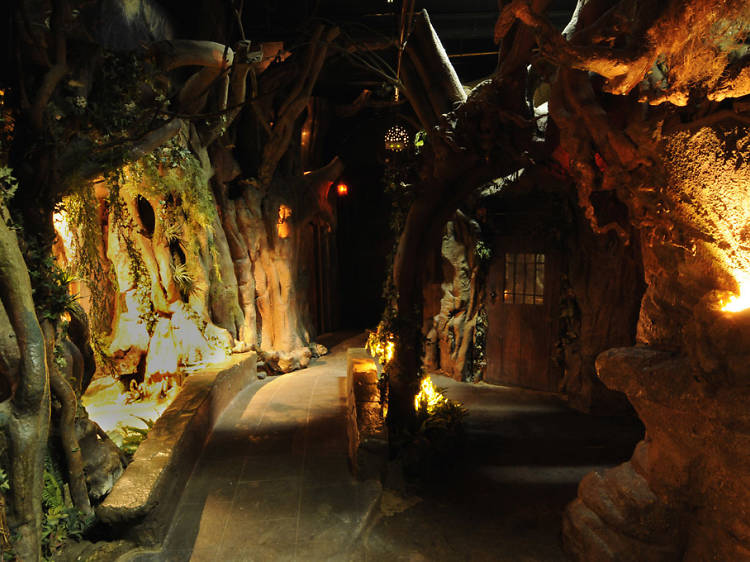 Another spot to pay attention to is at C/Muntaner, 88, where a dragon with a demonic humanoid face observes you with a mocking sneer: he looks like the brother of Pazuzu, the little demon statue in 'The Exorcist'. Also keep an eye out for the repugnant mouldy worm that welcomes you from over the sign at El Bosc de les Fades. These are dragons created by anonymous artists that can easily compete in the category of ferociousness with those by famous Barcelona artists and architects, such as the ones at Casa Martí, home to Els Quatre Gats, which also happens to be the first important work by Puig i Cadafalch.

These wrought iron dragons and terrifying high reliefs set in columns are beasts worthy of a Nordic saga. You'll also want to see the serpentine worm with the forked tongue that guards the door of Can Balaciart (Pi i Margall, 55), a locksmith's established in 1946 and closed in the 1980s. 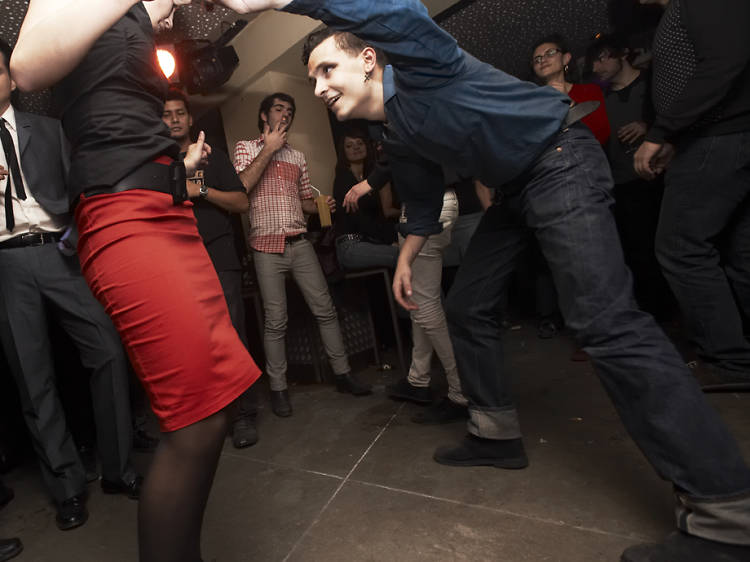 You can still find this jazz venue open at C/Vallmajor, 33, where you can enjoy concerts of music from the genre. It was a hot spot int he '60s in its original location at C/Tuset, 30, as it was one of the places to be during the birth of the Nova Cançó artistic movement that promoted Catalan music during the Franco regime. That particular dragon named Franco censored the song 'Què volen aquesta gent?' ('What do these people want?'), by Maria del Mar Bonet, after Bonet played a concert in La Cova del Drac (Dragon's Cave).

Among the paradigm of the bourgeois bakeries, you'll find one of the few examples of a female dragon in the city at Foix de Sarrià. Carved into solid wood is an angry dragon with claws. How do we know she's a she? By the pair of voluptuous breasts on her, of course.

Barcelona has an American football team, it's true (aka 'football team' to American readers). The Dragons enjoyed sweet moments of triumph in their early days at the start of the 1990s when they competed in the World League of American Football, a European league, and they even won the title in 1997.  Trouble surrounding the ownership of the brand – the main shareholder, a Barcelona businessman, wasn't interested in carrying on with it – resulted in the franchise being sold to a German city.

If you live or are staying near the sea, you're probably cohabitating with this friendly reptile from the dragon family – it's even called the Mediterranean house gecko in English. Originating in the Mediterranean basin, this and the 'dragó comú' (Tarentola mauritanica) are the only geckos found in Catalonia (and referred to as 'dragons' in Catalan, as you may have noticed). If you get one in your home, don't try to get rid of it, as they're great at devouring mosquitoes for you on sultry summer nights.

You'll know when you're at C/Boqueria, 1-7, because it's where the street converges with La Rambla, the Pla de la Boqueria and Cardenal Casañas. Oh yeah, and also because you'll see this big Japanese-style dragon atop the old Casa dels Paraigües (Umbrella House), which is also decorated with Japanese-style umbrellas and parasols. Instagram worthy.

It's not clear why, but carved in stone above one of the windows of the Casa dels Canonges (House of the Canons, found next to the Generalitat building) is a dragon that's clearly of Chinese origin: short legs, a serpentine body and no wings.