Satirical street artist, prankster, advocate for the city: Foka Wolf won’t show his face, but he will speak to Time Out

I’m standing in a dimly lit corridor in a studio complex somewhere in Birmingham, and I’m looking into the eyes of Foka Wolf. He’s laughing about getting death threats for his ‘Voodoo Classes for Kids’ paste-up. ‘People were saying they were gonna kill me because, you know, religious people had taken offence at it,’ he says. ‘Someone from a church left a message. He didn’t sound too happy. It’s obviously black magic and that doesn’t go down with people that well. But that’s part of the reason I do it.’

The enfant terrible of our street art scene has been busy recently. To use Brummie parlance, the artist’s scathing brand of razor-sharp street satire has spread all over town like a mad dog’s shite in the past 12 months – on walls, lampposts, windows and hoardings. There was the poster on an abandoned shop front asking: ‘Are you Brexit ready? Bunkers from £9,000. Flame-throwers. Child traps!’ I’d done a double take before realising Foka Wolf had struck again. For a second there, I was quite interested in the flame-throwers.

It wasn’t long before Wolf’s work spread out beyond Birmingham. One Instagram post even showed an ‘Over 75s No Rules Deathmatch’ poster slapped on the marble façade of Trump Tower in New York.

Understandably, Wolf’s real identity is a secret, for now at least. He says his influences include the artist David Shrigley, Viz magazine and Chris Morris’s satirical TV classic ‘Brass Eye’, and he buys into the DIY punk aesthetic. ‘There’s a cut-and-paste old-school zine thing going on. I try to do it really quick. Just get the idea out there and not really care too much about what it looks like. Just get rid of it, basically.’

He describes his work as ‘misinformation’ and ‘IRL trolling’. But it treads a fine line between piss-take and prophecy. It’s as if the dystopian corporate prison of our nightmares is already closing around us, and Foka Wolf is rattling the bars. But he doesn’t seem fazed about the death threats, and I wonder if he enjoys the danger? ‘I guess so, yeah,’ he grins. ‘That’s how it started. But I’ve started to put more socially conscious ones up now.’

His recent work has attacked gentrification and corporate greed. Primark’s forthcoming Birmingham megastore, which was meant to open in December but got delayed until next month, was a target, and some luxury apartments for ‘the modern renter’ also got the Foka treatment (a huge sign simply saying ‘Boring’). ‘You look at all these big, cold corporate buildings going up everywhere, like apartment blocks. All the independents are getting priced out of the city centre and it does make me feel a bit angry. There are amazing and talented people here, but there’s no outlet for them. It’s a bit sad, really.’

His Megacorp logo, with its ‘Profit before People’ motto is a recurring motif. It appeared
on a cardboard box left outside Digbeth police station, which read: ‘Police robot unit. Low cost. No empathy. Conscience free. Totally safe.’ I suggest all this darkly surreal and sardonic humour is a peculiarly Birmingham thing, citing the ‘McFadden’s Cold War’ Twitter account, run by another public troll from the city. ‘That’s it,’ he says, and starts talking about an anti-establishment mindset that exists among many Brummies who never really feel like they fit in to the national conversation. ‘Northerners call us southerners and southerners call us northerners. There’s no big group identity we can stick with. We’re out on our own a bit. It’s good.’ Birmingham’s outsider status might be good for its humour and cultural quirks, but it’s not so good when both are co-opted by corporations for their own ends. A current HSBC street art ad in the Jewellery Quarter is selling Brummies financial products by celebrating local cultural icons such as Mr Egg. ‘There’s more to the city than that,’ he sneers. ‘I think it’s horrible. That’s all wrong.’

To fight back, he’s calling for more festivals and funding. ‘That might change the city a little bit, get more artwork out there and less corporate nonsense.’ But people have to want that change. He says that although he went to art school, he fell into a normal job like most people. ‘The years just disappeared. Then one day I thought if I’m going to do something I need to do it now. So I just sacked it off and went freelance.’ By day he’s a graphic designer, but by night he’s slapping up posters, poking at the powerful, and generally yanking our chains. Has he ever been caught in the act? ‘Yeah, somebody caught me the other day in Stirchley, near the British Oak [pub]. I told him I worked for the circus. He drove off and I put it up anyway.’

Foka Wolf vows to continue pasting up in Birmingham, but he’s branching out. London, New York and Bristol have already been hit. Nobody knows where he’ll strike next. But if you see a ‘Baby Eating Competition’ ad with an 0121 number on your street, you can rest assured. You’ve been Fokked. 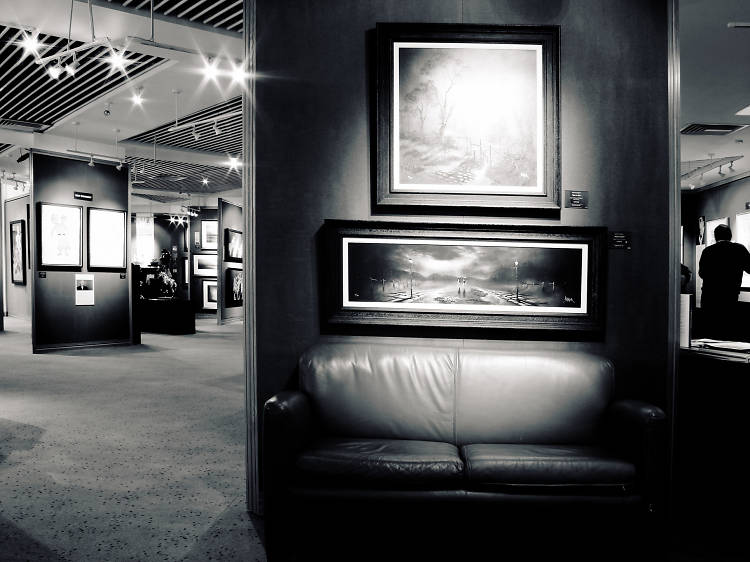 The best art galleries in Birmingham

When it comes to galleries, Birmingham can rival pretty much anywhere in the UK, with elegant displays of fine and classical art alongside a vibrant contemporary scene showcasing some seriously impressive new talent.