Be prepared to lose your sheet over the year’s most daring indie, a feat of costuming and commitment

Audiences come to the Sundance Film Festival to be challenged—that’s what the January showcase is known for. But even the most ready-for-anything crowds didn’t expect the eerie hush that descended when a dude in a white sheet appeared in A Ghost Story. More shocking? The initial laughs died down, giving way to awe, grandeur, even sniffles. Writer-director David Lowery—a veteran of big-budget family entertainments (Pete’s Dragon) and scruffy indies alike (Ain’t Them Bodies Saints)—achieves a spectral tone that’s completely unique. On a sticky summer day, we caught up with Lowery at the Flatiron District offices of A Ghost Story’s distributor, A24, to chat about creative risks and thread counts.

That first screening must have been terrifying for you.
I couldn’t even sit through it, I was so nervous. I can’t watch my movies at their premieres—I learned that lesson the hard way. I remember going back to my condo thinking, In 90 minutes, this movie will belong to the world, and I’ll take whatever comes. But it worked.

It did. But up until then, did you ever have a panicky thought? Like, I’ve come to Sundance with a movie about a guy in a sheet.
Oh, totally—every day of production, all the way up to that first Q&A when someone in the audience complimented us. The movie comforts me as a viewer, but I had no expectations that anyone else would like it. So it’s been an unending source of great happiness for me that it’s connecting at all.

You shouldn’t have been nervous. Ever hear of a little Demi Moore picture called Ghost?
I’m a deeply romantic person, nostalgic to a fault. We always would joke about that, even up until the premiere: No one knew what to expect, so we said, “It’s basically just a remake of Ghost with a bedsheet.”

You make big movies like Pete’s Dragon and then you do smaller, more intimate ones like A Ghost Story. Do you intentionally alternate modes, like a “one for them, one for me” thing?
The truth is, they’re all for me. I can’t make a movie if I don’t feel personally connected to it on a profound level. I didn’t set out to “bounce back” from the Disney experience—I just wanted to make another film. It had taken three years to make Pete’s Dragon and it’s tough for me to focus on one thing for that long. I have a very short attention span.

In a way, that’s kind of what the new film is about: maintaining a romantic connection long past death, maybe past the point of healthiness.
That’s a really good point. I ingrain myself into the fabric of my life—no pun intended, given this film—in an emotional way. That’s sometimes against my better interest.

Are you a spiritual person?
I was raised in a deeply Catholic family. There was a sense that everything we were doing was to prepare ourselves for an afterlife in heaven. In my teenage years, that became less important to me. Eventually, that turned into agnosticism, which became atheism. But I didn’t really think about that until mortality was self-evident in my own life. This movie is a culmination of where I’m at, in terms of figuring out how to live a good life.

Where does this idea—investing the old-school ghost icon with real pathos—come from?
It’s an image I’ve been in love with for a long time.

Why do you think that is?
It has a childlike naïveté to it, and yet at the same time, it’s incredibly haunting and sad. It has a passiveness to it, the lack of detail, that feels very tragic. It’s hard to explain. This is a person who has been left behind.

Was this the easiest gig your costume designer, Annell Brodeur, ever had?
It took a great deal of mechanical engineering, actually. What works in the context of Halloween doesn’t work when you’re trying to actually suggest the presence of a ghost. We were really after what you get when someone draws a picture of someone under a sheet: a very simple shape. Bringing that to life was tricky. There’s a series of petticoats underneath the sheet and a felt helmet you wear on your head, which allows the eyes to stay in one place.

Let’s get under that sheet. Was Casey Affleck, the actor who plays the dead husband, really doing this performance in ghost-face the entire time?
He was down for that, 100 percent. Casey loved the idea of being under a sheet. Frankly, I think that was a big draw for him. One of the most definitive moviegoing experiences he had as a child was The Elephant Man. This reminded him of that. He liked the idea of subjugating himself to the experience.

Seriously? It’s really him?
It’s not always him. We did some reshoots, and he was really upset he couldn’t be there. But a lot of it is. It was a challenge that he welcomed. Acting was not going to be a part of it. He was basically wearing and operating a puppet.

Rooney Mara in A Ghost Story

Rooney Mara, meanwhile, carries the whole film, and she’s terrific. She eats an entire pie out of grief. Where did that idea come from?
I read Joan Didion’s book The Year of Magical Thinking to get some insight into someone who’s been widowed. Grief reveals itself in the most mundane activities, like eating. It’s never when you’re looking at old pictures.

It’s a five-minute take in which she becomes painfully exposed: chewing, crying, heaving. How many times did you do it?
Once. I didn’t want to force her to do it again. We knew we had it. I think she was very relieved to have that scene in the rearview.

A Ghost Story is now playing.

Check out our review of Ghost Story! 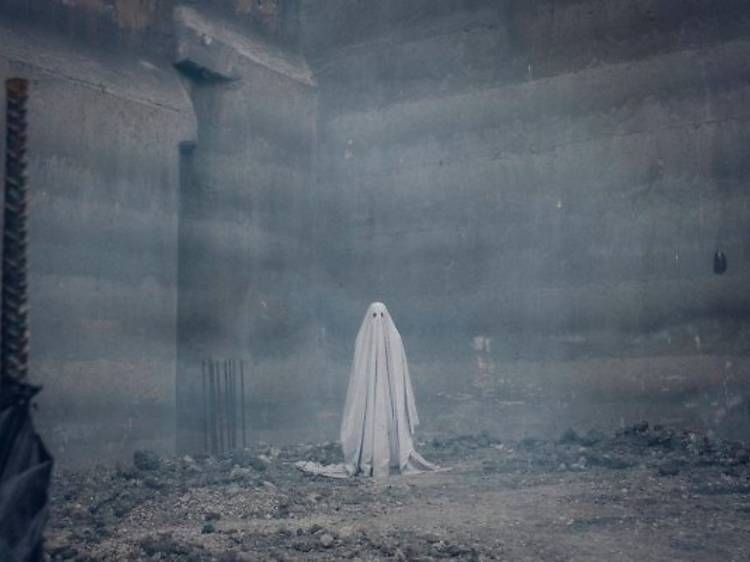 Interrupted by death, a couple’s love finds a weird way forward in this slice of supernatural risk-taking