Can't wait for ‘Squid Game’ season 2? Here are 12 films and shows to stream.

Finished the Netflix sci-fi? Here's a dozen more bloody delights for get sucked into

Last week, audiences all over the world fell in love with Squid Game, an endearingly odd, viscera-soaked South Korean series that took Netflix by storm. The tale of desperate strangers whisked away to a mysterious island and enticed to play a series of deadly children's games – starting with a bullet-riddled game of ‘Red Light, Green Light’ – is an instant global sensation. In fact, it’s now tracking to become the streaming service’s biggest hit of all time, topping Lupin, The Witcher and Bridgerton in sheer numbers.

With its endearing characters and commentary on bloodlust and bureaucracy, Hwang Dong-hyuk’s series seems to have everything audiences were looking for. And apparently, what audiences in every corner of Netflix’s global market wanted was character-driven melodrama, high-stakes survivalism, ultra-stylised dystopian settings and endless geysers of blood.

The series’ popularity makes the Tiger King craze seem tame by comparison. There’s no way Netflix will let its surprise hit be a one-and-done phenomenon, but while we all wait for the next round of Squid Game, there are plenty of films and shows that share its dark and cheeky DNA. The below – a mix of classics, survival sleepers and cult sensations – should keep your bloodlust sated while we await for a return to South Korea’s most violent playground. 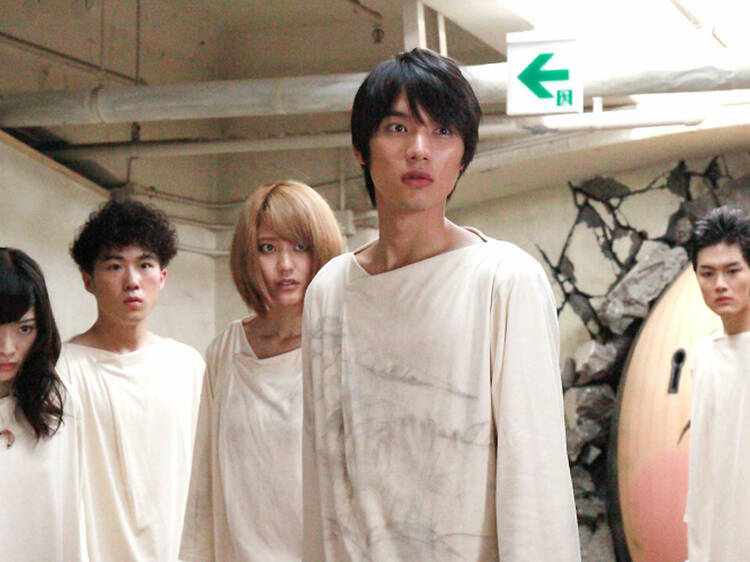 In many ways, this chaotic supernatural thriller from prolific Japanese provocateur Takashi Miike (Audition, Ichi the Killer) lays out the blueprint for Squid Game. Starting with a deadly version of ‘Red Light, Green Light,’ Miike’s film pits school kids against one another in a series of head-splattering playground games. But because Takashi Miike is Takashi Miike, things are somehow more gonzo than in the comparatively thoughtful Squid Game… that means that instead of a shadowy cabal, the ones pulling the strings are vengeful gods operating through enormous, wise-cracking dolls. You’ll never look at a lucky cat statue the same way again. 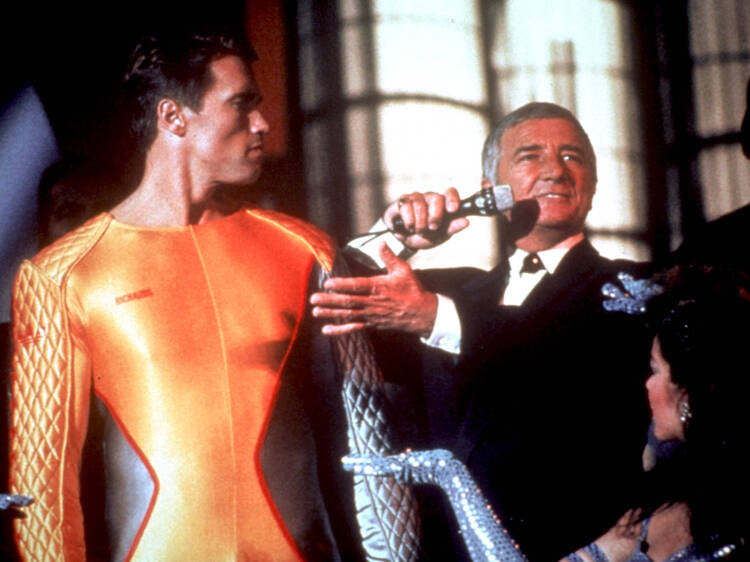 The ultimate ‘80s killer game-show film is more neon gladiatorial dystopia in nature, but this loose Stephen King adaptation nonetheless captures everyday bloodlust as convicts vie for freedom by competing in a televised fight to the death. That the so-called ‘everyman’ at the center is Arnold Schwarzenegger at his most hulking and quippy is half the fun, and Family Feud host Richard Dawson’s villainous turn is a top-tier ‘80s scumbag. We await Edgar Wright’s mooted remake with bated breath. 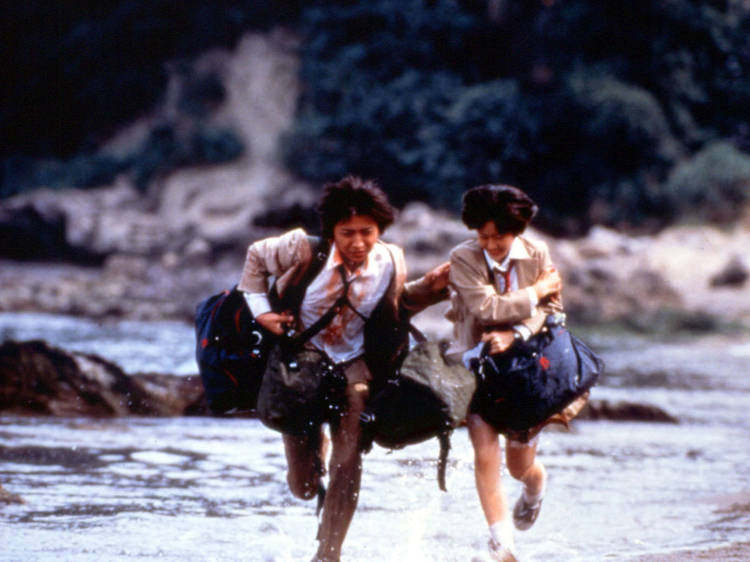 Japanese madman Kinji Fukasaku’s notorious killer-kid slaughter fest spent years garnering a cult following despite being banned for its extreme violence. Its DNA is all over Squid Game, from the mysterious island locale to its sprawling ensemble of combatants both meek and hardened. The film’s social commentary and class warfare is surprisingly funny, and like Squid Game, once the game is afoot, things escalate in a spectacularly splattery way. 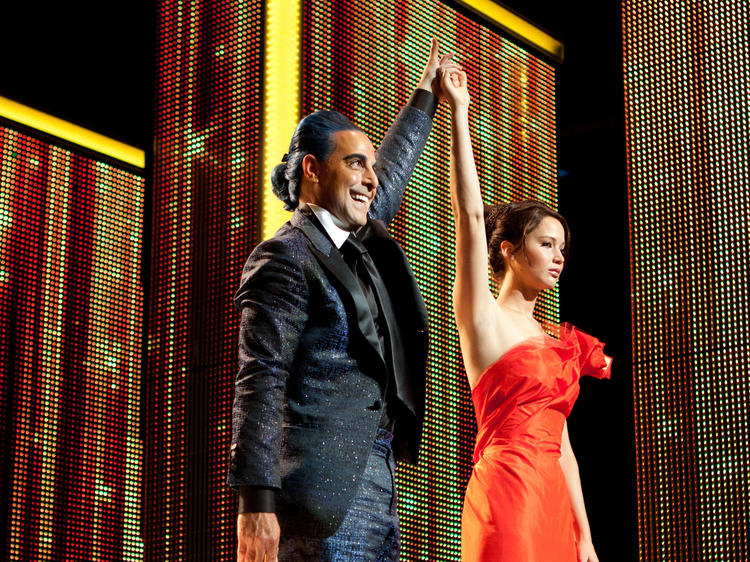 While Battle Royale was slapped with bans for its extreme content, The Hunger Games translated its story of kids killing kids for audience gratification into a billion-dollar PG-13 franchise with extremely ironic fast-food tie-ins. In essence, it’s an emo-kid combination of The Running Man and The Most Dangerous Game, but with its high-tech island setting and on-the-nose social commentary, there’s more than a dash of The Hunger Games in its South Korean counterpart. Plus, it comes with the added bonus of watching Jennifer Lawrence become a global superstar right before your eyes. 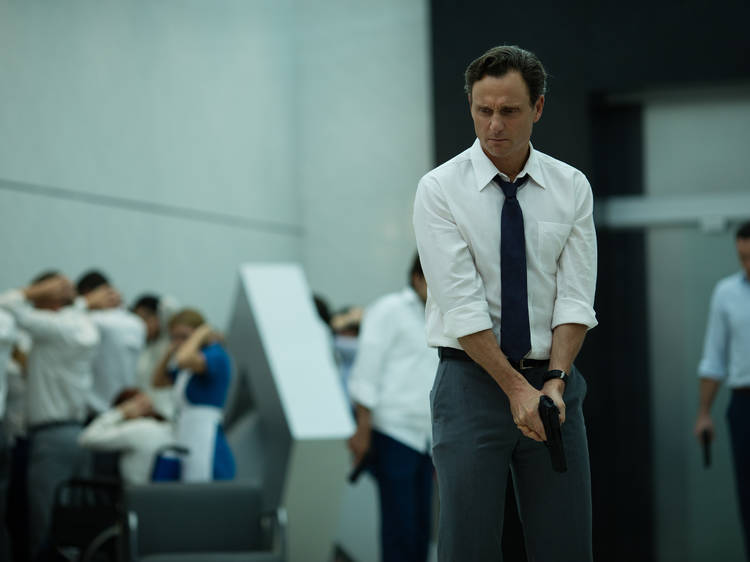 Directed by Wolf Creek’s Greg McLean and written by Guardians of the Galaxy’s James Gunn, The Belko Experiment focuses its kill-or-be-killed sadism on corporate drones locked in a high-rise and forced to get creative with the office equipment in order to appease unseen overlords. The film doesn’t fully live up to its potential and isn’t nearly as smart as it thinks it is, but it’s still a solid Americanised companion piece to the South Korean import with enough thrills to complement the mixed messaging. 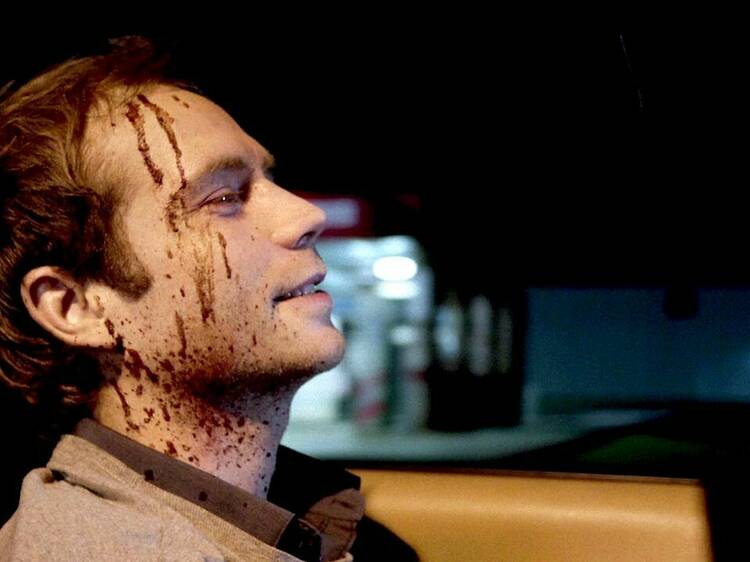 Daniel Stamm’s dark tale of a downtrodden loser forced into an escalating game of ‘would you rather’ plays like a watered-down episode of Black Mirror filtered through David Fincher’s The Game. While the results are muddled at best, its main character – a desperate man trying to repair a broken life through a series of humiliations and violent encounters – reads like a less fleshed-out version of Squid Game’s rock-bottom protagonist. Despite its hit-or-miss execution, Stamm orchestrates scenes of mass carnage with aplomb, particularly in a wires-meet-motorcycles sequence that’s right up there with Squid Game in terms of mass bloodletting. 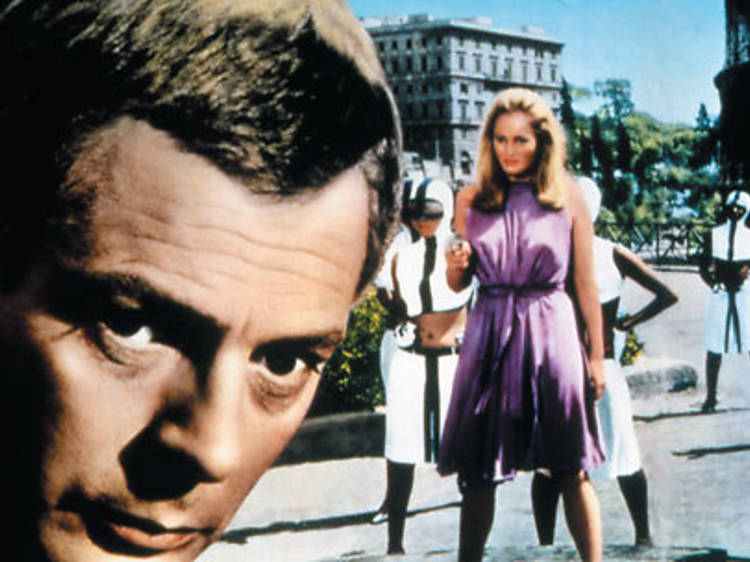 Urbane AF Marcello Mastroianni is a mile from the jaded artiste of Fellini’s 8½ in this brilliantly offbeat Italian sci-fi. Here, he’s still urbane and still jaded, but his art is killing: He’s a successful hunter in the wildly popular TV entertainment of its stylishly dystopian world (it’s set in Rome, how dystopian are you realistically going to get?). In a precursor to the likes of The Running Man and Squid Game, human killing is sport in Elio Petri’s film – albeit with a more pronounced satiral edge. Special props to Ursula Andress, souping up her supervixen on-screen presence with smarts and ruthlessness to outwit her arrogant male adversary. 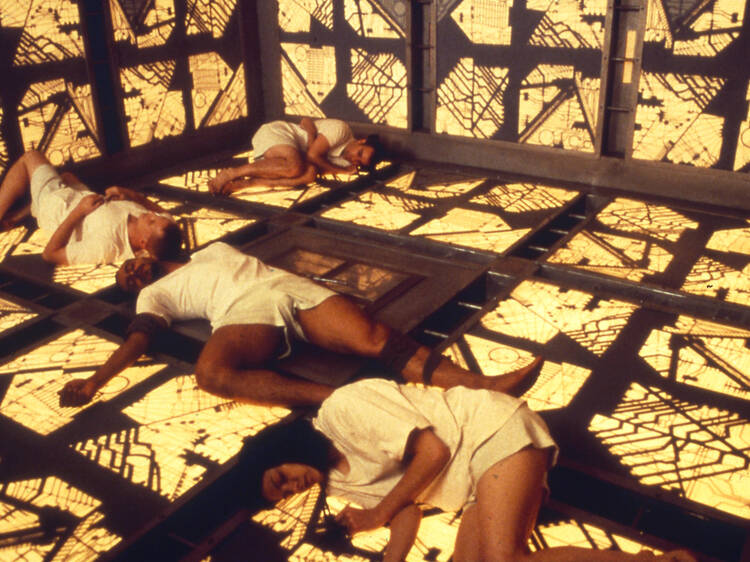 This no-budget, gore-soaked Canadian indie was doing the escape room thing way before it was trendy. It’s a piece of puzzle box mania perfectly calibrated for modern gamers, and with its story of disparate and desperate players whisked off mysteriously by an unseen bureaucratic organisation, things should be very familiar ground for those looking to supplement their Squidding. 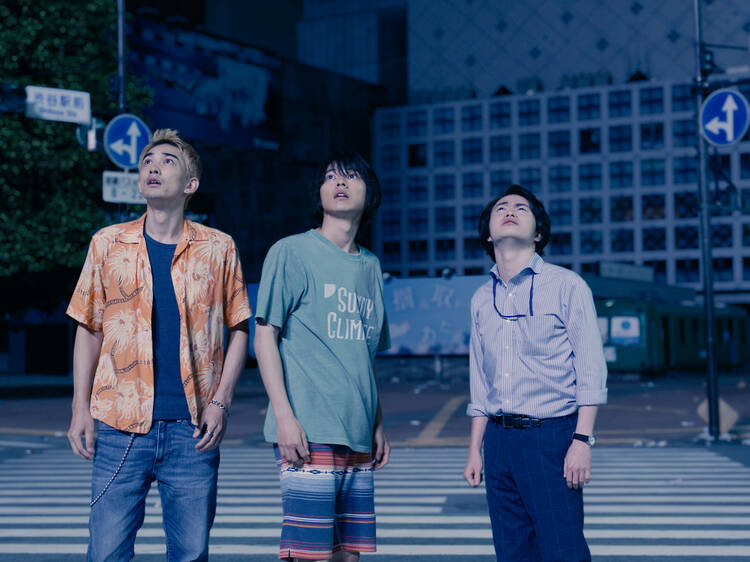 Essential viewing for anyone still hungry for Squid Game’s extreme-gaming motif, this Japanese Netflix series drops unsuspecting low lives into a dystopian version of Tokyo and forces them into a bullet-and-laser strewn game of survival. Extremely stylish and white-knuckle in its set pieces, it’s a collision of Battle Royale, Escape Room and the Cube movies, serving as the perfect digestif for those looking to keep the game going after the finale episode of Squid Game. 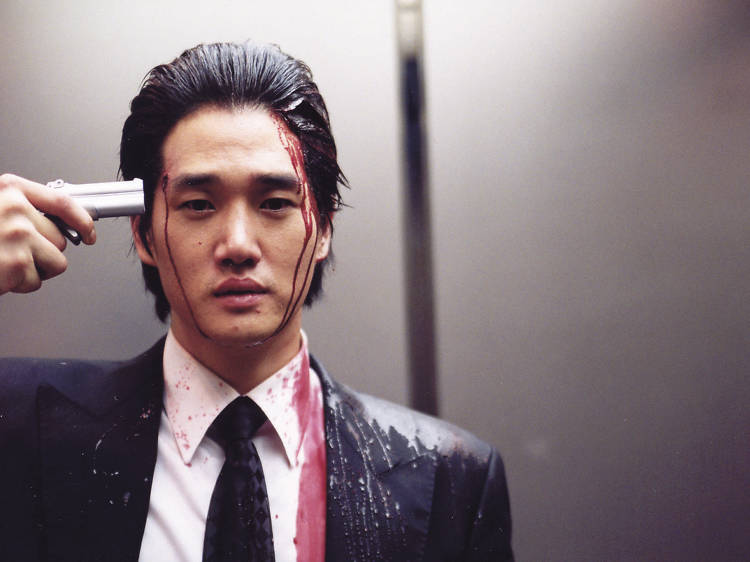 Who needs squids when you have Oldboy’s hero scarfing down a live octopus? Park Chan-wook’s noir-flavored extremist mystery remains the gold standard of South Korean puzzlebox thrillers: a grimy, twisty crawl through the gutters featuring an all-time-great one-shot fight sequence and one of the most depraved finales ever put to film. The game here isn’t exactly of the playground variety – though it does hinge on a primary school insult – but it does keep viewers guessing until the gut-churning finish. 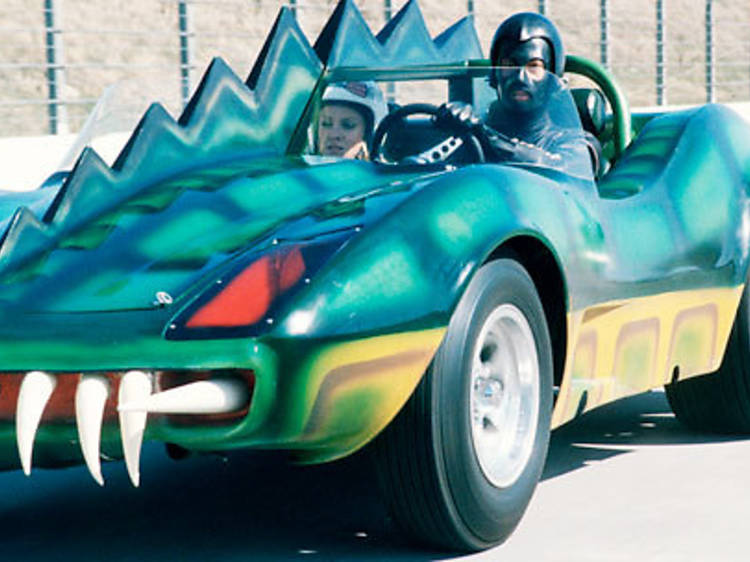 This Roger Corman-produced explosion of camp is The Godfather of schlocky action films wagging a finger at audience bloodlust. Death Race is a go-for-broke trash classic in which gearheads – among them young David Carradine and Sylvester Stallone – cruise the country splattering bystanders to the delight of home viewers. It’s nowhere near as nuanced in its commentary as the Netflix show, but it does share a commitment to mayhem, and its fingerprints are all over the casual sadism on display throughout the hit series. 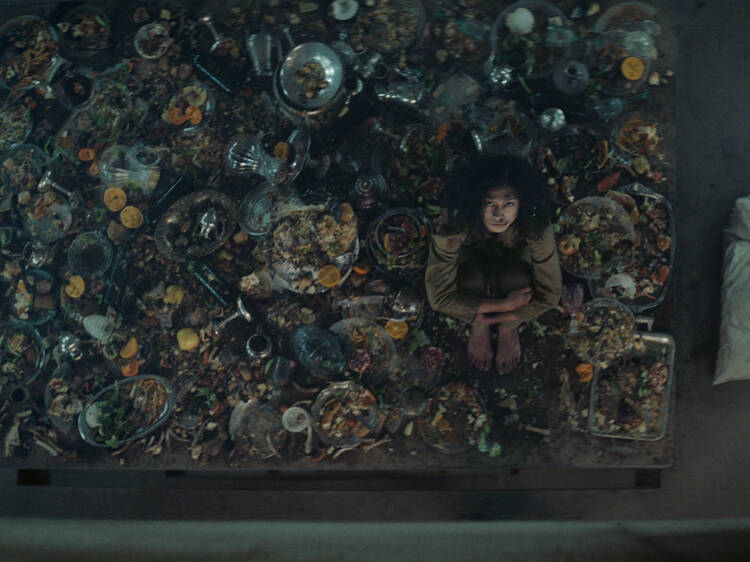 An elevator platform groaning with gastronomic delights slowly descends through multiple levels of a prison. Each floor is given a limited amount of time to eat their fill. Remove food from the platform or linger too long, and the room is heated or cooled to unbearable temperatures. Every month, prisoners swap floors: But up or down? Do you stuff your face, not knowing when the next proper meal is coming, or save some for the men below? Like the more politically minded cousin of Vincenzo Natali’s Cube, the Spanish Netflix sci-fi is seeded with pointed ideas about human nature – JG Ballard would have loved it.