His last film ‘Scott Pilgrim vs the World’ seemed to signpost a shift towards Hollywood for Edgar Wright, the 39-year-old British director of ‘Shaun of the Dead’ and ‘Hot Fuzz’. So what a pleasure it is to discover that his new film, ‘The World’s End’ plonks him right back where he belongs: in England’s green and pleasant satellite towns, albeit one overrun with alien robots.

The film reunites Wright with his longtime collaborators Simon Pegg and Nick Frost. They play childhood friends who attempt to relive their lost youth by repeating a pub crawl with three mates, and end up tangling with intergalactic forces.

‘The World’s End’ is the final instalment of the gang’s ‘Cornetto Trilogy’ (so-called because each film has a different flavour). But while it’s sure to delight fans of the first two films, this is a more bittersweet, nostalgic tale. Could Wright, Pegg and Frost be – whisper it – growing up?

So when did they stop being just a series of comedies you guys made together and become ‘The Cornetto Trilogy’?
‘It was when we were promoting “Hot Fuzz” that someone pointed out the Cornetto connection, and asked if we were going to make a trilogy. And I said yes, it’s going to be like Kieslowski’s “Three Colours”, but three flavours. So it was a silly joke in an interview that got recycled and repeated.’

Have you had any feedback from Walls?
‘We actually had a formal meeting with them! They’re very pleased with the namecheck.’

What do you think the connection is between the films, aside from the stars, the director and the ice cream?
‘They’re all relationship comedies, and they’re all about perpetual adolescence. In “Shaun of the Dead”, Simon’s stuck between his colleague as a model of the young professional and Nick Frost as the stoner on the couch.

‘In “Hot Fuzz” you’ve got the professional who sacrifices his life for work, and the naive idiot. They have to find a middle ground – one of them’s going to get dumber and the other’s going to get smarter, and they’re going to meet in the middle.

‘For “The World’s End”, as a final act – and it is very final – we have five guys, four of whom are adults with professions, wives and children, but the ghost of their teenage years is going to drag them back to their adolescence.’

‘In “World War Z”, it’s not Brad Pitt’s fault, he’s just a guy. But in “The World’s End”, Simon’s character Gary literally provokes a cosmic intervention. We liked the idea that you take this character who’s a walking car crash, whose fuck-ups have become legend. And he goes from being a social nuisance to becoming a galactic nuisance.’

What made you want to go for the sci-fi angle?
‘Well, the sci-fi element fits perfectly with those bittersweet feelings of returning to your home town. You used to be kings of the castle, now you feel somehow alienated. That’s the deliberately punny premise of the film. I get attacks of nostalgia, I don’t really know why. I’m happy in my life and career, but sometimes I still want to go back to a night in 1991 and do it better.

‘Everyone has that night in their youth, where it got dark at ten o’clock and it seemed like it would go on for ever. Gary has a vision of that night, and he wants to get back there like his life depends on it. So it’s a strange mixture of “Body Snatchers” and “Blue Remembered Hills”.’

It’s a very specific, very British kind of sci-fi you’re referencing.
‘John Wyndham [author of ‘Day of the Triffids’] was criticised by Brian Aldiss, who said his books were cosy catastrophes. The scale is quite small. Or there’s the original “Quatermass”, where events of global significance are happening in High Wycombe. I always liked that idea, and this is on the same page.’

Did you write the characters then cast them, or write around the actors you already wanted?
‘The second one. We actually had actors in mind to the point where we wrote their names into the first draft, rather than the character names. Our first thought was that now Martin Freeman’s played the lead in a billion-dollar franchise, he might finally deserve a major part in one of our films. He had one scene in “Shaun”, two in “Hot Fuzz”, and he’s very good friends with Simon, so we wanted him to have a proper part in this one.

‘Paddy Considine – we loved working with him on “Hot Fuzz”. He’s the greatest. Eddie Marsan – I’d never worked with, but Nick had worked with him and said he was great. He’d done a lot of dark parts, so we felt he deserved to play someone lovable.’

After ‘Shaun of the Dead’, how responsible do you feel for the ongoing invasion of zombie movies, TV shows and games?
‘Not very. But I am surprised by how long it’s gone on. It’s been nine years since “Shaun”, and it’s still going. But I can’t watch them now, I feel burnt out. I still like zombie movies, but making that film was like being a fan of chocolate cake, then baking a chocolate cake and never wanting to eat chocolate cake ever again.’

Video: Edgar Wright versus the apocalypse 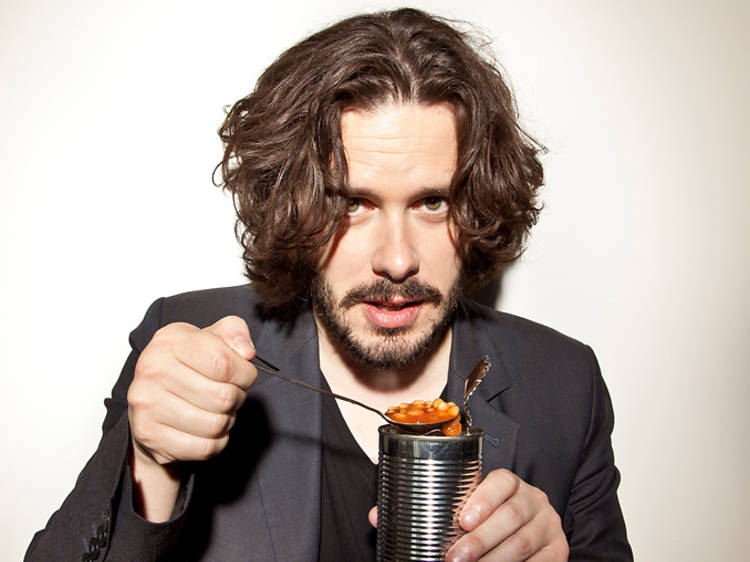 Surviving the apocalypse with Edgar Wright

He inflicted zombies on London in 'Shaun of the Dead' and now he's threatening civilisation in 'The World's End'. So Edgar Wright ought to know a thing or two about the apocalypse. But how would he cope in a real-life extinction situation? We decided to test his know-how with the fiendish Apocalypse Roulette challenge.

Read more
See how Edgar Wright would survive the apocalypse