Idris Elba: 'I have many different strings to my bow and I want to fuck around with them all'

In a revealing interview, the Hackney-born 'Pacific Rim' star talks about Stringer, Luther and Mandela, and how music helps him keep it real

‘The Famous Cock. You know, by Highbury & Islington tube!’ Idris Elba has been talking down the phone from San Francisco about his role at the heart of ‘Pacific Rim’, the loud, crunchy and metallic blockbuster directed by Guillermo del Toro. But when I tell him I’m speaking from Highbury in north London, he immediately veers off-message and starts riffing on the area’s pubs. ‘All my favourite locals are still there. It’s a stone’s throw from where I grew up,’ he says, particularly amused by the Famous Cock. ‘You might even see me in there every now and again, but the name of the pub: oh, the irony!’

Some actors talk about their big-budget, effects-driven payday movies like they’re doing Shakespeare. But the 40-year-old Elba sidesteps the bullshit: ‘It’s a completely different animal to working on something like “Luther”,’ he says. ‘With that series, we run with the raw emotion so much more. With something like “Pacific Rim”, it’s a little bit more manufactured.’

Perhaps, but it’s some manufacturing job: an immense robot versus monster smackdown. ‘Pacific Rim’ will be the action film of the summer, but it’s also partly a $190 million investment in Elba’s ability to hold the world’s sympathy and belief in a part Tom Cruise was considered for at one point: Stacker Pentecost, the military commander who faces down an invasion of monsters from beneath the sea with the words, ‘Today we are cancelling the apocalypse.’

Elba has made huge movies before – ‘Prometheus’, ‘Thor’ – but this is the first time he’s shouldered a blockbuster and he sounds like a man at the heart of a machine: ‘When you’re in a movie like this,’ he admits, ‘the gear-up for the release is completely different to what I’m used to.’

The publicity tornado for ‘Pacific Rim’ is only the start of Elba’s summer. Once the chatshow sofa-hopping is over, he’ll spend July and August in Barcelona shooting a new action movie with ‘Taken’ director Pierre Morel, and co-stars Javier Bardem and Sean Penn. Which sounds sweet enough. But Barcelona is also handily placed for Elba’s other summer gig: a seven-week residency DJing at a club in Ibiza.

He knows there are people who lampoon his parallel music career (‘Idris Elba still can’t rap,’ scoffed a headline in XXL magazine last year) and see him as another actor cashing in his fame to dabble in music. ‘I just ignore it,’ he says. ‘When I go off and DJ, it’s my reset button. It’s ppffooom! It’s how I find myself. When I’m out spinning in a little club in Hoxton, that’s nothing to do with film. It gets me back to who I am.’

Elba claims people find it hard to get their heads round the fact that he wears different masks. For some, he’s a TV star, the man who first made a real impression as drug kingpin Stringer Bell in ‘The Wire’ and is now the heart and soul of the BBC’s moody cop series ‘Luther’. For others, he’s a movie star on the rise. For clubbers, he’s a DJ. Sometimes he even talks about himself in the third person. ‘When I’m playing Luther,’ he says, ‘Idris ends up in a darker place.’

He clearly enjoys creating alternative versions of himself. As a DJ and rapper, he uses the name Driis or King Driis. ‘I don’t care, you know?’ he says of a career that’s sucking up everything in sight. ‘I have many different strings to my bow and I want to fuck around with them all. I don’t want to just be an actor, I want to do other things.’

He’s been DJing for years. As a teenager, he used to help out an uncle who was a party DJ in east London ‘for Afro-Caribbean weddings, so I was playing a lot of African, calypso and reggae type jam’. His parents are West African – his mum’s from Ghana and dad’s from Sierra Leone – but his own roots are firmly in the capital, which he still regards as home. ‘Someone asked me the other day: “What’s it like for you now? Do you live in Hollywood?” I’m like, “Er, no. North London.”’

A drama teacher at his Canning Town comprehensive gave him the confidence to pursue acting when he was 16. He says he didn’t know anyone else who wanted to follow that path. ‘All my other mates were DJs or drug dealers or whatever. They didn’t want to know about acting.’

When did he first believe acting could actually be a career? ‘It happened at a time when I wasn’t making any money from it,’ he remembers. ‘I was doing a night shift at the Ford factory [in Dagenham] with my dad and I knew that if I stayed there I’d be a lifer. I took the moment to say: “Stop, go for it.” The next morning I took a flight to New York. Backpack, YMCA. I didn’t get a job. I tried to get into the Lee Strasberg school but there was all sorts of red tape. But it gave me the energy to come back and do it. When I got back to London, the first thing I did was get a play.’

From the mid-1990s, Elba started to win TV and theatre work. But it was ‘The Wire’, which he filmed between 2002 and 2004, that was the turning point. ‘It was a massive achievement at that time,’ he agrees. ‘Here I was in America, on an HBO show! I was like, “Fuck off!” I didn’t have a massive part in the first series, but I was living my dream. It came after a long stint of unemployment, at a point when I really wanted to do it. I threw my heart into it.’

By this time next year, it won’t be ‘Pacific Rim’, ‘Luther’, ‘The Wire’ or even DJing that come to mind when people think of Idris Elba. It will be Nelson Mandela. Elba is playing the legendary ANC leader in ‘Long Walk to Freedom’, a biopic released in January. Nobody’s seen it yet (although Elba says he’s seen ‘a very long, good cut of it’), but it would be a shock if Elba doesn’t end up doing the rounds at awards ceremonies.

As we speak, Mandela is desperately ill in hospital and Elba is understandably nervous of talking about the film. But if he does win the acclaim of critics, audiences and peers for playing ‘one of the human race’s most prominent figures of our time’, it’s unlikely to be the start of a more serious phase. Elba’s up for anything, from beating down monsters in ‘Pacific Rim’ to portraying a genuine political legend.

‘I’ve got the philosophy that I want to do everything at least once. I haven’t had the opportunity to do a kung fu film yet, but trust me, I will get one at some point. What’s the point in being an actor if you play the same role over and over again? I’m not a clown who puts on a face and does the same routine every night, I’m supposed to try and depict every single person I can.’ 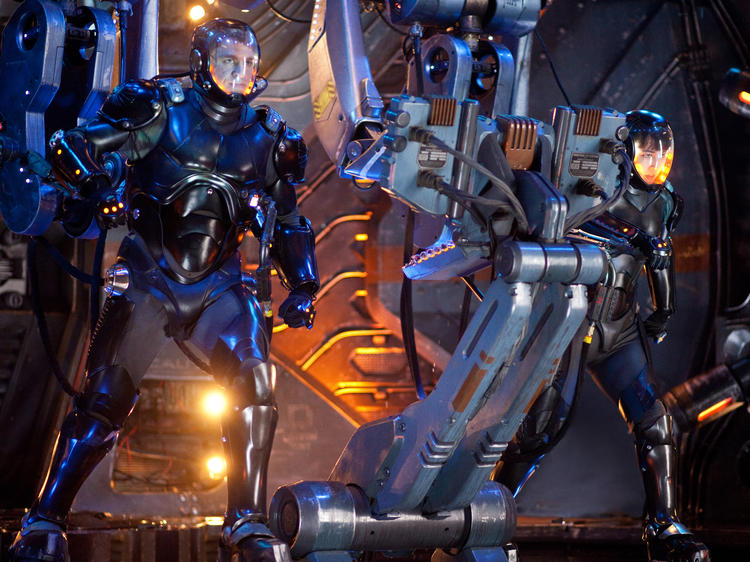 To be fair, ‘Pacific Rim’ never promised to be anything more than a monumental robot-monster smackdown. Throughout the promotional campaign we’ve barely seen a human face, aside from a brief flash in the trailer of Idris Elba bellowing about the apocalypse. So to turn around and accuse ‘Pacific Rim’ of being inhuman does feel a little churlish.

The action set-pieces are superb: thunderous, rain-soaked, and beautifully detailed – you can almost feel the rust and the slime. They’re also a tad repetitive. By the climax, we’re starting to feel like we’ve been punished enough.