Joaquin Phoenix is the lead in Woody Allen’s new film – no surprise for an actor who’s favoured oddball and downbeat characters. But is he just as grumpy in person?

At 40, Joaquin Phoenix is still an uncomfortable fit for Hollywood. He’s been nominated for three Oscars: for ‘Gladiator’, ‘Walk the Line’ and ‘The Master’, but in 2011 he called the awards ‘bullshit’. Two years earlier he’d appeared on ‘Letterman’ looking weird and paranoid and sporting a shaggy beard. It was a stunt for mock-doc ‘I’m Still Here’ – which detailed his disastrous, off-the-rails new career as a rapper – but it speaks volumes about Phoenix that many took it as real.

This same discomfort is there when we meet near his Hollywood Hills home, at the same hotel where I interviewed him ten years ago. Today we’re talking about his lead turn in ‘Irrational Man’, Woody Allen’s new one about a depressed, boozy, pot-bellied philosophy professor who falls for a student (Emma Stone) and tries to reason his way to the perfect murder. Following ‘The Master’ and ‘Inherent Vice’, it’s the latest in Phoenix’s line of shufflers, mumblers and deluded idealists.

I thank him for meeting me, and Phoenix, wearing old jeans, Converse and a sports top, just smirks, before ordering lemonade (he went to rehab for alcoholism in 2005) and tucking into a pack of American Spirit cigarettes. I point to his motorbike helmet and ask what he rides. ‘A bike.’ This is going well.

Seeing I’m losing patience, he perks up, a little. ‘It’s a Ducati,’ he tells me, ‘a Super Sport 900, and I didn’t ride it for six years and then I pulled it out again this summer.’ A deep breath. A pause. ‘So that’s funny that we met ten years ago,’ he says. An awkward beat. ‘I don’t remember it at all.’ At least you can’t accuse him of being a bullshitter.

You’re very picky about your roles. But was working with a legendary director such as Woody Allen on ‘Irrational Man’ a no-brainer?
‘I always liked Woody as an actor, actually. I remember seeing him in “Manhattan”, and he has a scene at the end where he’s talking to his ex, and he wants her back. He’s been such a shit throughout the film, but he never asks for the audience’s sympathy. It’s something I always want to do, but I think I always fail. I wanted to be around him and to understand how you can do that.’

You’ve said before that you have a box at home for each film you’ve made, full of objects from making it. What’s in the ‘Irrational Man’ box?
‘That’s true. It’s literally a box. Just a regular old cardboard box. It’s mostly just crap: call sheets and stuff, and books. For this film, they’re mostly books on philosophy that I didn’t understand.’

How far did you get reading them?
‘I did try to read Immanuel Kant’s “Critique of Pure Reason”. I had it out when I was meeting with this philosophy professor as research, and he was like: “Don’t even bother. I couldn’t get past the first sentence.”’

‘Oh, this sounds stupid. Who gives a shit?’

You famously hate to watch the films you’re in. Have you seen ‘Irrational Man’?
‘I haven’t. Paul Thomas Anderson [the director] got me to watch “The Master”, and I saw “Her”. Those are the only two I’ve seen. I thought I might be mature enough to watch and learn. To think: These are the mistakes that were made. But it’s still something I struggle with… Oh, this sounds stupid. Who gives a shit?’

There was talk of you playing Doctor Strange for Marvel, but the role went to Benedict Cumberbatch. Would you ever be up for making a big film like that, or even a ‘Star Wars’?
‘Sure. When I was younger I was probably a bit of a snob about that. But they’ve gotten better. I’ve flirted with several of those films, having meetings and getting close, but ultimately it never felt like they’d really be fulfilling. There were too many requirements that went against my instincts for character. I’ve been spoiled. I’ve never had to make those compromises. I’ve not met a director yet with one of those films where we go through the script, they say: “You know what, fuck this set-piece, let’s focus on the character!” I understand, but it’s best I don’t do it.’

Do you think those filmmakers end up thinking you’re awkward or hard to please?
‘Yeah, but I’m not just being difficult. I’m just trying to find what works for me. I don’t want to commit to something and not fulfil those obligations. I enjoy watching those movies. Did you see the rebooted “Star Trek”? That kid Chris Pine who plays Kirk is fucking genius. I just don’t know if I want to have the experience of being in them. I’ve read some of those scripts and 75 percent is a description of some asteroid going through space.’

What sort of films do you still want to make? What roles have eluded you?
‘I still feel like I haven’t done the thing, whatever it is, that motivated me since I was young. I still haven’t achieved that feeling, the thing you’re striving for. And of course time is running out.’

You made ‘The Master’ with Philip Seymour Hoffman a couple of years before his death. What did you learn from him?
‘These days, everyone’s always trying to get a tattoo or a weight change or a haircut, but there was something really pure about his acting. He was so thoroughly about the truth of the moment. He said that when he was younger he’d tried so hard to come up with characters, and in the end he realised that his own experience was enough. I thought that was so beautiful and you really see that in his work. It’s almost effortless.’

You filmed ‘Irrational Man’ last summer and haven’t made a film since. How do you fill the gaps between movies?
‘I don’t do much of anything. I have a pretty simple, boring life. Stupid little hobbies that aren’t worth talking about! When I’m not working, not preparing anything, I love having to think about nothing at all.’ 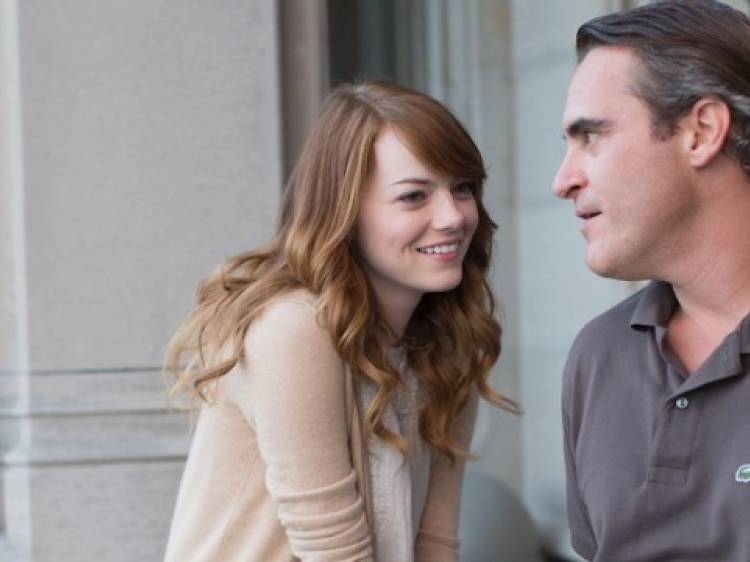 Another year, another Woody Allen film. But not since 2007’s ‘Cassandra’s Dream’ has Allen played it almost entirely deadly straight with a tragic male character at the heart of his drama. ‘Irrational Man’ harks further back to the likes of ‘Crimes and Misdemeanors’ and gives us Abe (Joaquin Phoenix), a philosophy lecturer who arrives to teach at a small East Coast college preceded by his reputation for eccentricity and womanising. It turns out he’s drunk, depressed and impotent.