The actor on his new IVF drama ‘Only You’, ‘God’s Own County’ superfans and his scent book for the Prince of Wales

He caught the eye in the terrific LGBTQ+ drama ‘God’s Own Country’, and your mum (and his) loves him in ‘The Durrells’. Soon to appear as Prince Charles in series three of ‘The Crown’, Josh O’Connor is next in line to a serious breakthrough moment. Before then, he’s starring with Laia Costa in romantic drama ‘Only You’. It’s a rare, heartrending look at IVF in which the 29-year-old plays Jake, a marine biology student with dreams of starting a family.

What appealed to you about playing Jake?
‘I liked that he had an idea of what a relationship should be – you fall in love, get married, have a family, buy a house – and that as soon as that process is broken, he can’t handle it. It’s a classic love story in some ways, only here the stumbling block is that they can’t have a child in the traditional way. The script was top-notch.’

Does IVF feel like a taboo subject?
‘Yes. Well, I don’t know of many films about it. I had a couple of close friends who were IVF-born and I wanted to know what they felt. They were like, “Well, I don’t remember going through the needle!” It became this magical thing to me.’

‘God’s Own Country’ had a lot of ‘Brokeback Mountain’ comparisons. Have you heard any for ‘Only You’? ‘Blue Valentine’, for instance?
‘Actually, someone did mention “Blue Valentine”. They’d seen a shot from the film that reminded them of it. It has the formula of a love story, and the way we shot it and worked was designed to make it extremely authentic and real. We’re with them on this journey.’

Josh O’Connor and Laia Costa in ‘Only You’

I heard you keep a scrapbook for each role. What’s in this one?
‘A lot of marine biology, because that’s what Jake is studying. It’s meant to be a sensory book, so when we got to Glasgow, I walked around looking for smells to put in it. I almost whacked an abandoned kebab box in there but decided against it.’

Where do you keep your scrapbooks?
‘They’re at home. A lot of them is to do with [building my] character but it’s also a nice way of looking back [on films I’ve done].’

What are your Prince Charles aromas for ‘The Crown’?
‘Stale sports kit and this scent that I felt smelled of him. It reflects his interest in religion: there’s an incense they use at Latin mass that makes me think of public school and wealth. It’s what I imagine [his school] Gordonstoun smells like.’

Now you’ve played him, do you feel protective of Charles?
‘Deeply. I felt really defensive watching this documentary about him in the post-Diana days when he was portrayed as a buffoon. He’s unbelievably intelligent, and he was banging on about climate change in the ’70s. I think he’s a bit of a hero.’

It’s a show with a huge budget. Any ‘holy shit’ moment on set?
‘Seeing Buckingham Palace recreated at Elstree Studios. I was thinking: What am I doing here? I had to drive a green Aston Martin worth £1.2m. There are two of them in the world, and Charles owns the other one.’

Are you braced for the fame ‘The Crown’ will bring?
‘Not really. Fame isn’t something I signed up for, it’s just a by-product of what I wanted to do. My career so far has been a series of moments of brilliant luck. When I left drama school I was prepped to be in shows and tour around England by van. My ultimate dream was to be a lead in the RSC and do a play in London, and within a couple of years, I’d done both. Being in “The Crown” and being recognised in the street is weird for me. It’s not been overnight thing; it’s been eight years since drama school so I’ve been fortunate to have had time to brace for it.’

You’re staying humble, basically. Will you keep the same friends?
‘Maybe, we’ll see. If Leonardo DiCaprio calls, I’ll hang out with him, sure.’ (Laughs)

Do people still want to talk to you about ‘God’s Own Country’?
‘I get messages from all over the world. It’s mad how popular it is in Japan. There was a hunger for a queer film that represented love in a hopeful way. Me, [director] Francis Lee and [co-star] Alec Secăreanu still have a WhatsApp group called “Freaks”. We’ll text each other if something happens.’

You live in London now. Where do you like to hang out?
‘My favourite restaurant is a South African place called Kudu in Peckham. I love going there and eating on my own. I’m a big eating-alone guy. I used to hang out in east London but now I get excited by parks and ceramics courses and things like that. I’m getting older!’

What do you do to unwind?
‘I do a lot of drawing and I used to make etchings. My granddad was a successful artist and my grandmother is a ceramicist. I wanted to be an artist but I didn’t get into art school.’

Is ‘The Durrells’ over for you?
‘Um... as far as we know, yes. It was the best four years of our lives but I think it’s run its course for now. That doesn’t mean ruling out a Christmas special or a movie. “Downton” has just done it! “The Durrells” is the one my mum likes. We’re actually going on holiday to Corfu. It was birthday present to her.’

What’s happening in this gif?

‘It’s a scene where we had a party in the house because in the story there were too many mosquitos outside. Someone said to me: “I think Lawrence Durrell is weird enough that he’d do a really weird dance.” So I did whatever came into my head and it was turned into a gif. It was one of the first gifs of me. There’s a couple now. I’m pretty sure there are some Prince Charles ones coming. When you’re a gif, you’ve made it (laughs).’

‘Only You’ opens Fri Jul 12. Read our review here. 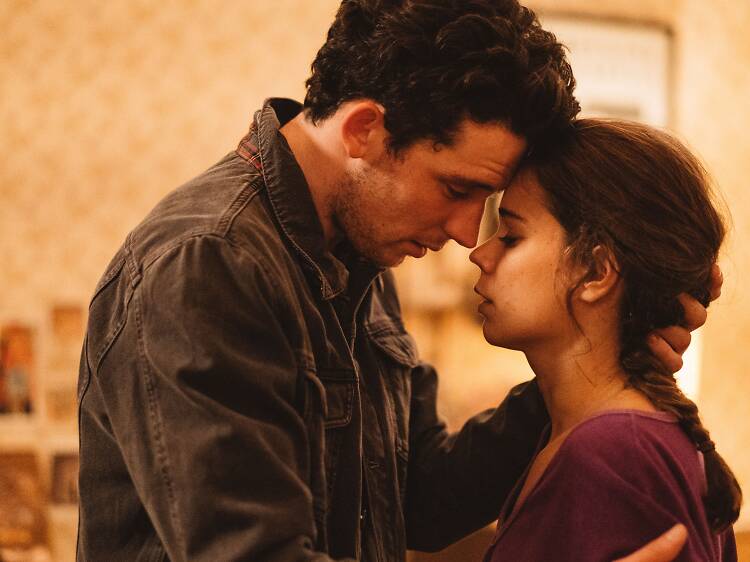