Immaturity runs deep in Silicon Valley, the show Mike Judge (Office Space) created from his postcollegiate experiences in the tech sector and his willingness to poke fun at geeks. But paradoxically, the TV show has overcome its growing pains to become HBO’s most reliable piece of weekly satire. And Kumail Nanjiani, 38, is its resident snark king. As the droopy-eyed Pakistan-born programmer Dinesh Chugtai (Nanjiani also grew up in Pakistan), the stand-up vet steals every scene he’s in. After years performing as a comic in Chicago, New York and Los Angeles, Nanjiani is comfortable going into verbal battle. He also does weekly podcasts (The Indoor Kids, The X-Files Files), a Comedy Central live show (The Meltdown with Jonah and Kumail) and is set to star in a Judd Apatow–produced movie he cowrote with his wife, author and comedy producer Emily Gordon, that is tentatively titled The Big Sick. (It could be his Trainwreck.) Nanjiani, self-effacing on the phone call from L.A., just wants to keep the gigs going.

It must be fun to play Dinesh, a character who’s smart yet the target of sick burns.
What I also like is that he’s a bit of an overthinker. He’s obviously smart, but he doesn’t quite have the emotional intelligence to go with it. He’s always running into a wall he erected himself.

How much of you is in Dinesh?
A bit of me is in everything I do. I’m definitely an overthinker. If I can’t find my keys, I’m like, I’ll end up in a ditch, lying somewhere. So that really happens to me. Also there’s the neurotic part of it: the guy who wants to be cool but can’t be cool because wanting to be cool is not cool. I think that’s a very relatable thing.

Dinesh is a privileged son, like a little prince coming to America.
Yeah, he definitely had a privileged upbringing, and he wants to prove to his parents that he can make it. So a lot of the success that he wants isn’t really for himself. Later on in the season, he gets obsessed with status symbols.

I love the bit about his cousin’s dumb-as-dirt app, Bro—an unlikely success that Dinesh willfully tries to sabotage.
Yeah, in a way, Dinesh is like a really smart child. So he’s motivated by greed, fear and wonder. In that episode, you certainly see all of that: He wants to impress his cousin, and then he gets stuck, and now he’s terrified he’s going lose all his money.

You did some computer work before your comedy career, right?
Yeah, fixing computers and making sure they were running. Teaching kids how to use computers. I was in Chicago doing comedy at night and tech during the day.

Was that good preparation for Silicon Valley?
I don’t think so, actually. I know just enough to not seem stupid. I don’t think I needed five years of doing that stuff to play Dinesh. I would’ve shortened that period significantly. Unwittingly, you’re the ultimate method actor. We’re just doing a comedy on HBO. I don’t need to go and learn how to make shoes for three years to play this part.

How does it compare it to developing a piece of stand-up?
Oh, TV requires a lot more patience. No one’s ever like, “I gotta get up at 5am and write my stand-up!” It’s an easy life. With Silicon Valley, it’s long hours and very unglamorous. Stand-up is lone wolf, whereas this is collaborative. I like being part of something bigger than myself.

Is it weird being recognized from the show?
I love that the show speaks to people. It’s the sort of scrappy David-versus-Goliath nature that I think people connect to emotionally. And it has opened other doors, like this movie.

You said you cowrote the script with your wife?
I wrote it with Emily Gordon, who’s my wife. A few years ago I had a meeting with Judd Apatow, and he was like, “Do you have any ideas you want to develop?” I told him five ideas, and he really liked this one. We lucked out and got some pretty big-name actors to do it. We start shooting in May in New York.

Can you tell me a bit about it?
Basically it’s a true story from when Emily and I first started dating. It’s going to sound heavy: She got sick. And fell into a coma. And then her parents came, who I didn’t know, and I hung out with them for 10 days. So it’s the story of me hanging out with Emily’s parents while she was in this coma because of this mystery illness. So it’s a comedy. But obviously very dramatic.

I feel the cringe already.
It’s something that’s very personal to us. What helped me a lot, of course, is having Judd Apatow on my side and him saying, “This guy should do a movie.” I don’t know if that’s the only way to get something made, but it’s certainly worked.

Judd’s persuasive like that. Were your parents supportive of your shift into comedy?
Yeah, but for them, it made no sense. They were like, “All right, you do whatever you want to do, as long as you don’t quit your day job.” And then I quit my day job. You do have to be tremendously lucky to have any degree of success in this realm, so they get a real kick out of it now.

Were you prepared to give it up after a certain point, or were you always committed? Did you ever feel nervous about it?
I feel nervous all the time, but I never considered quitting. There was never an ultimatum. And it helps to have Emily, who, for whatever reason, was like, “Hey, you’ll be okay.” That took a tremendous amount of [laughs] I don’t know what.

Maybe love. Your podcasts are terrific, too. They’ve crystallized something about your comedy, which is your voice. How aware of that are you?
I mean, I’m aware of it right now. But I don’t actively think about it. I know what is funny coming out of my mouth and what is not funny coming out of my mouth. You have to figure out: What is the joke that I can do that nobody else can do?

Was race always going to be a subject for you?
When I was studying comedy in Chicago, it wasn’t long after 9/11. There were a lot Middle Eastern comedians who were doing bits about hailing cabs and being terrorists. So the first two years I didn’t do any of that because I wanted to separate myself from those guys. But race is a big part of who I am, and it should be a big part of my comedy. 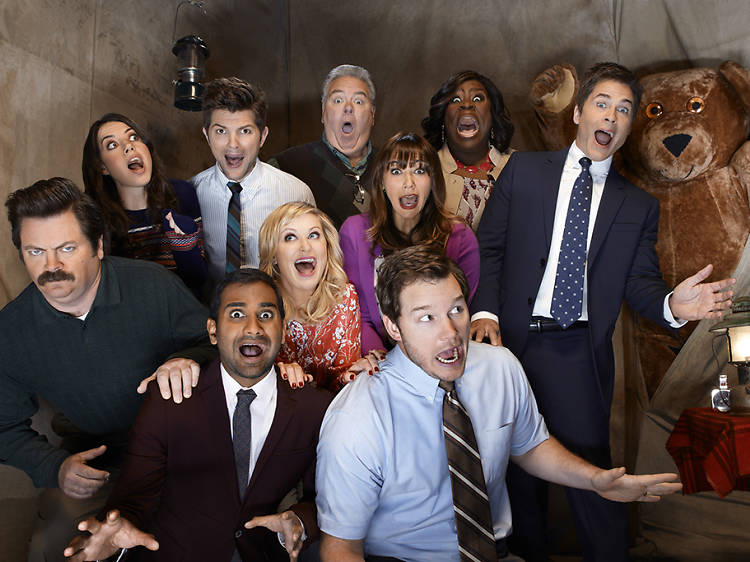 The best comedy TV shows of all time