Scarlett Johansson on NYC: “The city is beautiful and tragic”

Scarlett Johansson gets candid about the not-too-distant future, her new blockbuster Ghost in the Shell and why she’ll always be a New Yorker

In Scarlett Johansson’s new film, Ghost in the Shell, based on the popular manga series, she plays the Major, a cyborg in a neon-soaked, tech-loaded vision of the near future. She’s frightening: punching the living daylights out of her opponents while careening through a vivid nighttime cityscape. Adding to the Major’s dead-behind-the-eyes robotic mystique is that she appears to be totally nude—in a synthetic, patched-together, crash-test–dummy sort of way. You would not want to mess with her.

I meet an amiable, far less threatening Johansson at Crosby Street Hotel in Soho, in the city where she grew up, and she’s sporting a tightly cropped shock of blond hair. Ghost isn’t the 32-year-old’s first brush with action and effects-heavy blockbusters. She’s played the Black Widow in The Avengers movies for almost a decade now, a role that helped make her the highest-grossing actor in the world in 2016 and morph her into a lethal warrior for Luc Besson’s Lucy. But she also has a wide range as a performer, equally known for her turns in out-there movies like Jonathan Glazer’s alien film Under the Skin or aughts indie milestones like Sofia Coppola’s Lost in Translation.

Just days after our meeting, Johansson took on yet another role, a personal one, speaking passionately in defense of Planned Parenthood during the Women’s March in Washington, D.C. And fittingly, during our conversation, Johansson talks of things to come that extend far beyond the ass-kicking comic-book heroine she portrays in Ghost. The future that’s on Johansson’s mind—the focus that’s dominating her headspace at the moment— isn’t far out but just around the corner: the future shaped by politics, people and ideas in the here and now.

You play a cyborg in Ghost in the Shell. Where do you start with a character like her, one who’s not human in any normal way of feeling and thinking? Was it freeing? Restrictive?
It felt restrictive. With this character, there’s nothing extra to her. She’s efficient. There’s no fumbling for the right thing to say. She doesn’t nervously fidget. She’s not exactly mechanical, but she’s driven, and as an actor, you rely on physical nuances, vocal nuances, things that connect with an audience. You don’t want to give a performance that’s monotonous. But it has to stay true to what her experience is. It was challenging.

So you didn’t have much to play with in your creation of her?
There wasn’t much room. She’s not unfeeling, but she’s not exactly human. Her physicality can’t betray the emotions she’s feeling. Also, she doesn’t have a heart; she doesn’t have a stomach. These are things that tell us, as animals, how we’re feeling. Our gut instincts—she doesn’t have any of that. It was hard. It could be frustrating at times, especially working opposite [my costar] Juliette Binoche. I think she sensed my frustration. She said to me, “It’s hard to not be human!”

Are you interested in technology’s effect on all of us?
I’m wary of it. I’m probably more wary than someone who isn’t in the public eye. I see the value of anonymity in a way that one cannot unless they do not have it anymore. We live in a world where so much is shared about us, and anonymity is such a precious thing. I can’t imagine why you’d actively want to give it up. That’s why I don’t participate in social media. It seems like it can be a great waste of time. Not always, but there’s a possibility of that.

It must be tough, then, to keep some anonymity as a celebrity.
It comes with the territory, I guess. It’s the unfortunate side effect of doing a job that you love. At the same time, it’s part of the reason why you can do the job you love. One hand holds the other. I don’t feel like I have to actively give up my personal life, though. I don’t have to overshare.

You live and work in Europe a lot these days. Do you still think of yourself as a New Yorker?
Yeah, I do. I’m a New Yorker. It’s something that follows you. It’s an inherent part of how you approach life in general, being a city kid. I carry it with me whether I’m aware of it or not. How I function in other cities, how I problem-solve, how I get things done, how I communicate: It’s all the product of growing up in a city where anything is possible. The city is unforgiving. It’s beautiful and tragic and, you know, available and distant, all in one afternoon.

Ghost in the Shell asks us to think about the future. Did that vision excite you and make you want to be involved?
It was exciting. Also, the director [Rupert Sanders] is very visionary and visual, too. That’s the vocabulary he’s most adept with, his visual vocabulary. He’d probably say that himself, that he doesn’t know if he communicates so well with words. He’s an artist, whether it was with drawings or collages or videos that he did or think pieces he put together to make up a visual bible for this. All that, combined with the conversations we were having about the character, that’s what got me really excited.

Thinking about the sort of world we’re heading toward seems timely. Do you think politics has already put the future into sharp focus for many Americans?
Yes, and we’ve been kind of complacent. In the United States, we don’t have mandatory military service or a draft or anything like that, so people don’t necessarily think about voting, which in some other places is a life-and-death decision. Now it’s all catching up with us. It has brought us to this new administration, which is scary.

“The city is unforgiving. It’s beautiful and tragic and, you know, available and distant, all in one afternoon.” 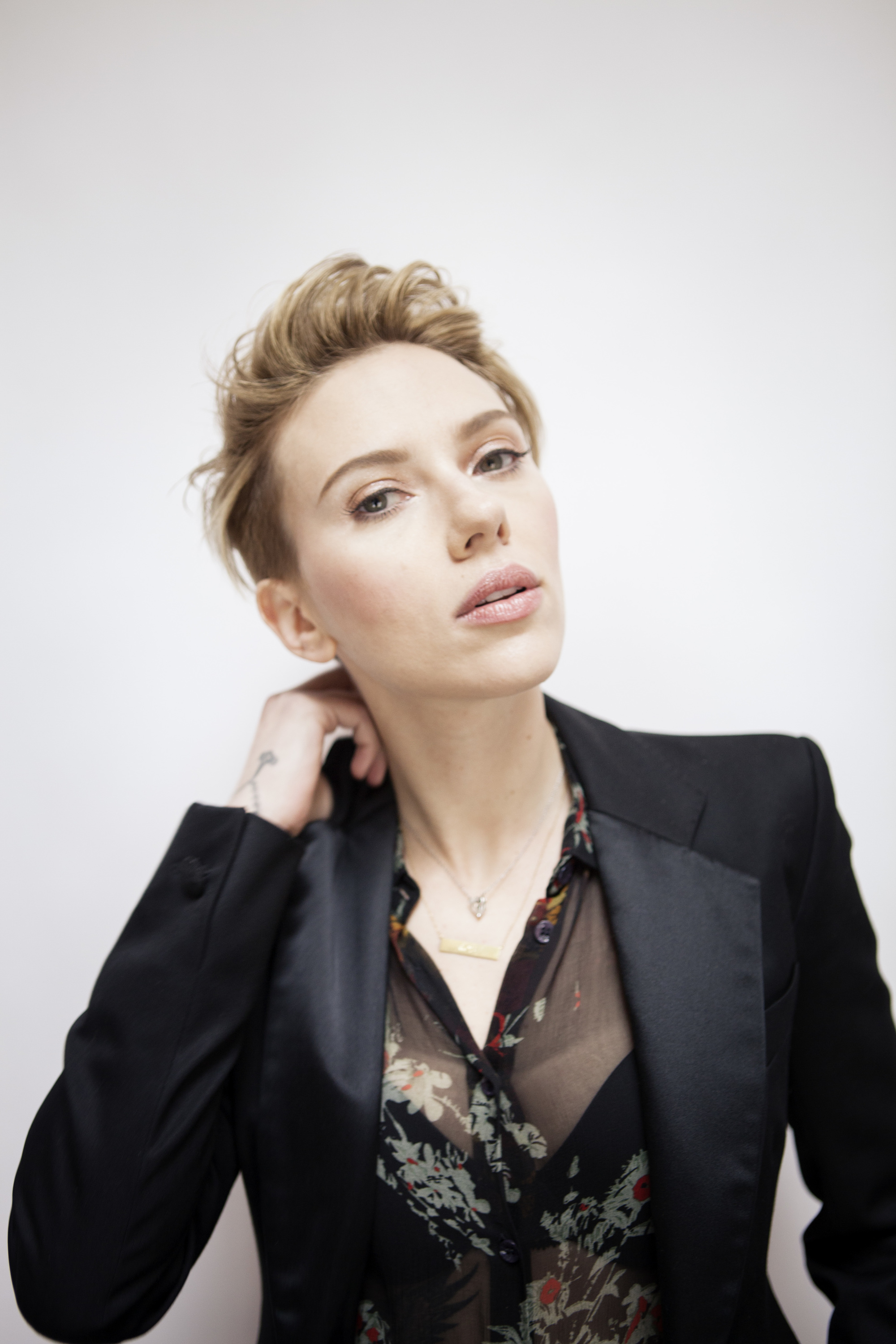 What scares you the most?
I’m most concerned about the environmental ramifications because that’s a clock you can’t turn back. We’ve had other administrations that were backward, in that they were not progressive. But this presidency is unprecedented because we have someone in office who has absolutely no political experience whatsoever. He’s an unpredictable person who is clearly a megalomaniac. But the thing that is scariest is the huge environmental impact. Also, we have an administration that is completely out of touch. Someone like Trump has been out of touch with the everyman for decades.

And yet he campaigned as a man of the people, as an antiestablishment voice.
I don’t think he is seen as a man of the people, though. I think that people are, in some ways, so self-loathing that they couldn’t actually elect somebody who was speaking to them. Voters just thought, Let’s try something else! [But they weren’t] actually thinking what that could mean. Most people, when they were voting, were not thinking about the Supreme Court or the Senate or what it could mean for the next 20 years. They were just frustrated and wanted something different. They wanted to throw away government completely without thinking that they need to be governed. Reform, yes, I’m for that. But being antigovernment altogether? That doesn’t make any sense. It’s ignorant and silly and frustrating. But there you have it—four years! Darkness is nigh. It’s okay, I’m staying. I’ll fight the good fight..

You’re best known globally for playing the Black Widow in The Avengers series. What keeps that role interesting for you?
I’ve been able to peel back the layers of this onion for, like, eight years now. I’m excited to know where she goes next. I’m waiting for The Avengers three and four scripts, like all of us are. Marvel, where the fuck is my script?!? I’ve played [the Black Widow] for a long time, so I can have my input, and I know what feels right and what doesn’t. It’s fun as an actor to return to something.

You started so young as a child actor in the mid-1990s, with films like Home Alone 3 and then your big break in The Horse Whisperer. You’re now a veteran.
Twenty-five years! It’s crazy.

Your work is diverse, but a lot of the attention you garner is about your appearance. Magazines have voted you the sexiest woman alive. How do you take that kind of fixation?
There have been times when I’ve been offered stuff like that, magazine covers, and I didn’t feel like doing them. I’d think, Nah, I don’t feel like being objectified in that way. But sometimes, I’m like, “Okay, I’ll take it.” It is what it is. It’s a choice you make. There’s only so long you’re going to be the sexiest anything or whatever.

Do you look to movies to challenge you in different ways, some being more physical, some being more emotional or intellectual?
I do, and this one is fresh and challenging and excruciating. It’s great to push yourself as far as you can go and see what happens, whether that’s being the sexiest whatever or whether you’re a person who is a thing without a body, or a body with a separate brain. It’s great to see how you can stretch out and challenge yourself. What an amazing opportunity to have that.

Ghost in the Shell opens Fri 31.

Watch the trailer for the Ghost in the Shell