Wes Anderson: ‘I would love to do a story set in Dickensian London’

Wes Anderson is back - and he’s got a pack of mutts in tow. We speak to the director about his new animated film, ‘Isle of Dogs’

There’s no other director quite like Wes Anderson. The master of style, the champion of whimsy, the lover of really specific colour palettes…whatever your tastes, his cinematic creations are always something to marvel at.

Isle of Dogs is his latest, and his second animation after ‘Fantastic Mr Fox’. Not a story of the Docklands peninsula (although there’s sort of a connection), it’s an adorable canine-centric caper. It’s set on an island near Japan to which all the country’s hounds are banished after an outbreak of ‘dog flu’. It’s got all the visual panache you want from a Wes Anderson outing, plus a thoroughly decent underlying message about the importance of tolerance. Oh, and a howling Harvey Keitel.

Speaking to Anderson on the phone a couple of weeks before release, he’s absolutely charming. His speech is full of literary turns of phrase, the odd wry observation and thoughtful pauses.

There’s a rumour that ‘Isle of Dogs’ was inspired by you seeing road signs in London to the real Isle of Dogs. Is that true?
‘It is true but I had totally forgotten it! Our producer Jeremy Dawson, who also worked on “Fantastic Mr Fox”, did an interview and told somebody [that story]. That’s when I realised that the beginning of this whole movie was because of me seeing the Isle of Dogs sign– I didn’t even know what Isle of Dogs was. I was just imagining what it could be.’

There’s an important underlying message in ‘Isle of Dogs’ about inclusion and tolerance – was that inspired by recent political events?
‘We started working on the movie maybe six years ago, so the world changed a lot while we were making it. We often thought what’s happening around us was related to what’s happening in the story. We started by looking to history but as we were making the movie it became more about looking to the front page of the newspapers for our inspiration.’

In ‘Fantastic Mr Fox’, the main character’s suit was inspired by your own. Did any personal items find their way into ‘Isle of Dogs’?
‘The main dog in the movie is called Chief and I grew up with a black labrador whose name was Chief. So that’s a personal connection.’

Was the Chief you grew up with similar in personality to the on-screen version?
‘I don’t think he had the same complexity. He was pretty straightforward.’

Greta Gerwig plays a no-nonsense US foreign exchange student visiting Japan in the film. She’s great – had you wanted to work with her for a while?
‘Yeah: we had known Greta for a long time because Noah Baumbach [her partner] and I have been very good friends for many years. So I was sort of expecting that Greta and I would have something we were working on together before too long.’

Bill Murray features, too. He’s notoriously hard to get in touch with. Do you still have to leave a message and hope he gets back to you or is there a Bill-Wes hotline?
‘You could have a hotline, but it doesn’t mean anyone’s going to pick up! I think I might fall into that category!’

You’ve filmed a lot in London – including this film, which was shot at 3 Mills Studios in Bromley-by-Bow. Where do you like to hang out in the city?
‘My favourite restaurant is River Café but a close second would be St John. The menu is always changing but they usually have marrow, which is great. Often [there’s] some bloody bird: a pigeon or a woodcock or a grouse or something. That’s often what I have. They can get pretty hardcore over there.’

Is there a place in London that you’d love to use as a location in one of your films?
‘A luxury that’s not going to be afforded to me is to adapt a Dickens book that has never been done before. Every Dickens story has been done so many times there’s really no room [for another]. But I think I would love to do a story that was set in Dickensian London – somewhere around the Strand.’

Any Dickens story in particular?
‘“David Copperfield” would be a good one… but it would be hard to have an original take on it.’ 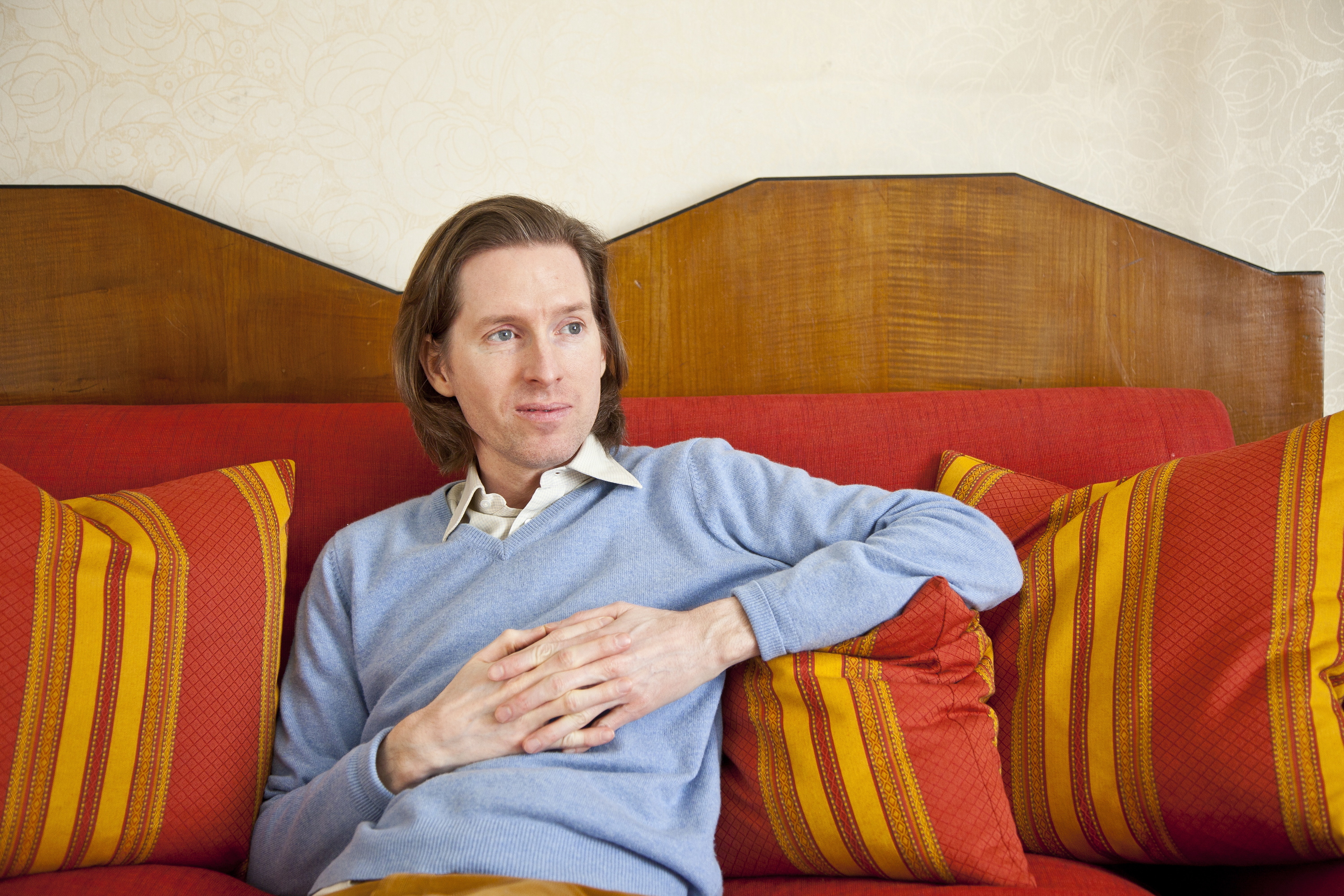 Several high-profile filmmakers have made TV shows recently. Do you have a small-screen series up your sleeve?
‘I don’t really, but I think the two things are merging together now. You can present what you do however you want – there’s the freedom to do whatever you like. So I expect probably at some point I’d do something that way. I like the experience of having a movie that goes into cinemas and is seen by people sitting in a room together: that’s what a movie is to me. But I watch a lot of movies in all the other usual ways and I can’t say that’s a bad way to experience a story.’

Your visual style is so distinct and joyful – does it spill into the rest of your life? I really hope that your home is like the Grand Budapest Hotel.
‘Nope. It’s pretty simple. I have a pretty different approach. With a movie you’re trying to create something that somebody’s going to watch for 90 or 100 minutes and recreate an illusion and a world they’re going to live in. It’s different if you’ve got to live there all the time.’

Last question. Based on this movie, I’m guessing that you’re a dog person… Would you ever consider doing something for all the cat people out there? ‘Kingdom of Cats’, perhaps?
‘The story’s written by me and Jason Schwartzman and Roman Coppola – we’ve all been friends for a long, long time. Jason has a dog who he’s lived with for 11 years or so and he’s 100 percent a dog person. Roman has a cat and he loves his cat. And I have neither. We have a couple of goats in Kent [where Anderson’s partner lives], but that’s the extent of the animals. I’m certainly not a goat person. The truth is, I like dogs as characters in movies. To me, the dogs in our story are people. I’m not a diehard dog person when you get down to it.’ 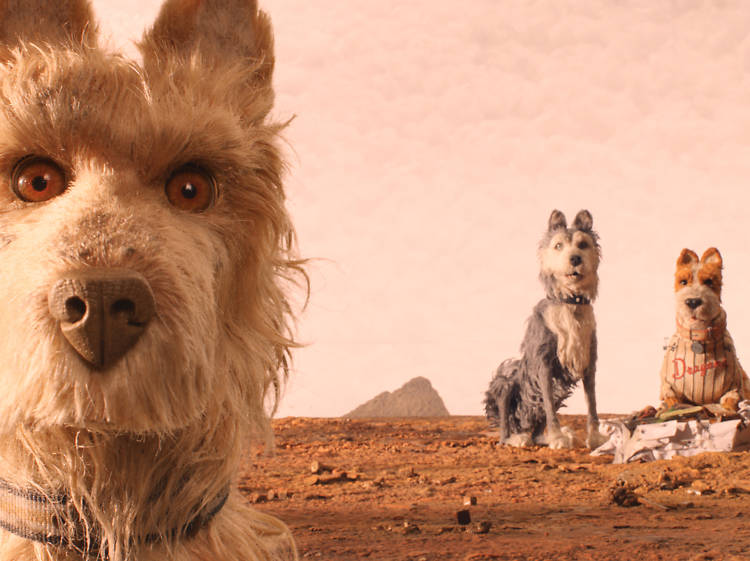