When thinking of the best Florence restaurants (and food culture all across Italy, for that matter), most people nurse thoughts of pasta and pizza. But when getting to know the individual cities that make up the boot of Europe, folks realize there is much more to the local cuisine than previously thought.

Typical and traditional Florentine cuisine is heavy on the “peasant” recipes that have been around for centuries, which means less truffle and more simple sauces. There’s the traditional peposo stew, the main meal consumed by the workers that built the Duomo (one of the best things to do in town) because of the cheap cuts of meat and the ability to boil the stew in red wine even up on the scaffolding. Legend has it that it was a personal favourite of Brunelleschi himself, the architect responsible for the dome.

Visitors will also find Tuscan bread on just about any table around town. Fun fact: it’s made without salt. Some believe that’s the case because of the war over salt taxes with Pisa centuries ago while others claim that the sodium would marr the flavor of the fresh ingredients used to cook here.

Although deeply devoted to cuisines and techniques that have defined the city’s past (make sure to check out the oldest gelato shop in town for more on that), Florence’s gastronomical scene has made some room for modernity, mostly influenced by the heavy rounds of tourists that take over the city to eat and shop each season. Today, the town’s foodies can be split into two categories: on the one hand, you’ll find those that keep the local trattorias and osterias alive by abiding to strict traditions (Mario’s will refuse to cook your steak anything other than rare while other eateries will scoff if you ask for cheese to be peppered on your fish or pasta). On the other hand, visitors might indulge in more modern takes on the classic Italian dishes, complemented by “clean” and modern atmospheres that seek to cater to the international crowd.

Although we do advise exploring the city’s restaurant scene in its entirety, we remain partial to the kind of eateries that will remind your taste buds of all the reasons why Italian cuisine is rated by many as the most delectable in the world. 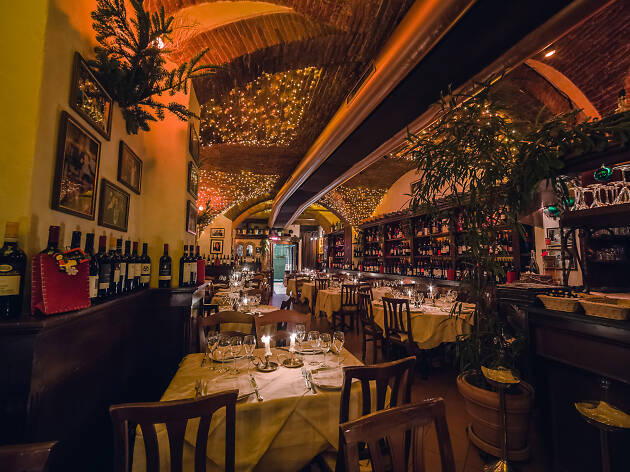 La Giostra is known for its quirky backstory and for hosting the likes of Elton John. Run by an Austrian royal family, the space boasts the perfect ambiance for a romantic night out with candle-lit tables and deep red wines in beautiful glass decanters. The plates are carefully crafted and extremely Italian, albeit offering a more gourmet take on traditional trattoria eats. Given the restaurant’s popularity, make a reservation in advance. 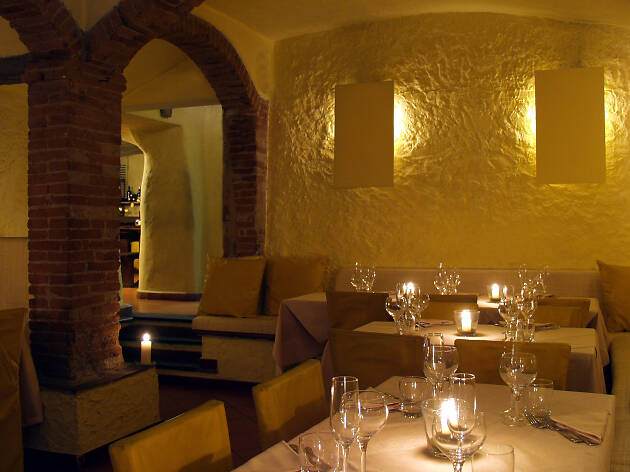 Just around the corner from La Giostra find the lesser-known and just-as-delicious Cantina Barbagianni. It might be a tad difficult to find the place, seeing that most of it is below street level, but just follow the smell of Tuscan cuisine and walk behind the many locals that love dining here. These incredible dishes haven’t yet hit the tourist scene, so delight in the exclusivity of it all. 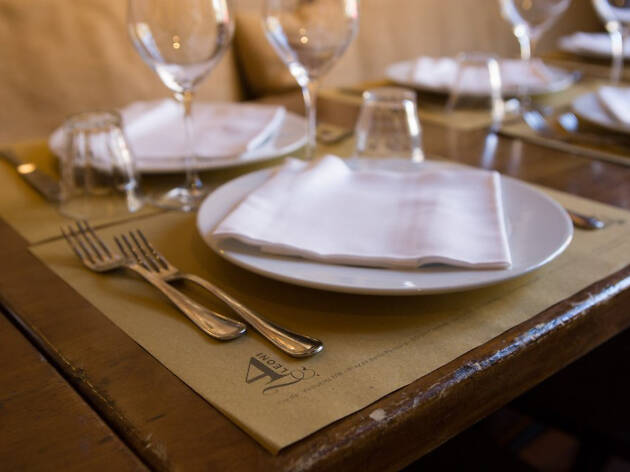 Just down the road from the famous Pitti Palace, the rustic modern 4 Leoni is found in the most idyllic little Italian piazza peppered with beautiful outdoor seating. The specialty dish here is the pear-filled pasta with a taleggio cheese and asparagus sauce that will literally send shivers down your spine. 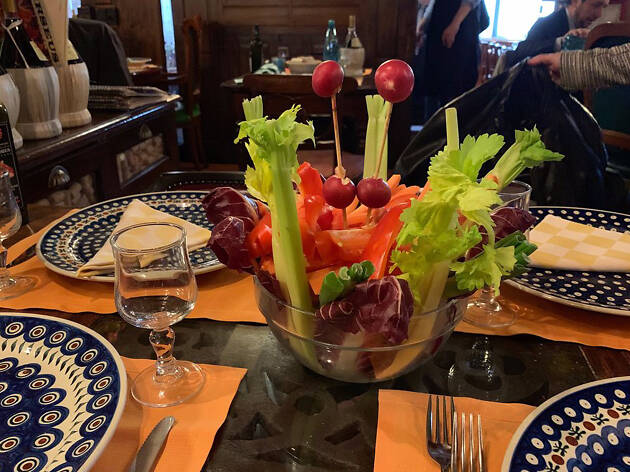 If you’re looking for steak, it’s worth the effort to get out to Perseus. Located just past the old walls of the city centre, this is the go-to destination for Florentines craving steak – and for good reason. Everything from the decor (frescoed walls! Hanging vines!) to the menu reflects a devotion to tradition. Warning: Florentines like their steak “al sangue,” which literally means “at blood” but translates into “rare,” so, if you ask for it to be more cooked, you might actually be refused service. 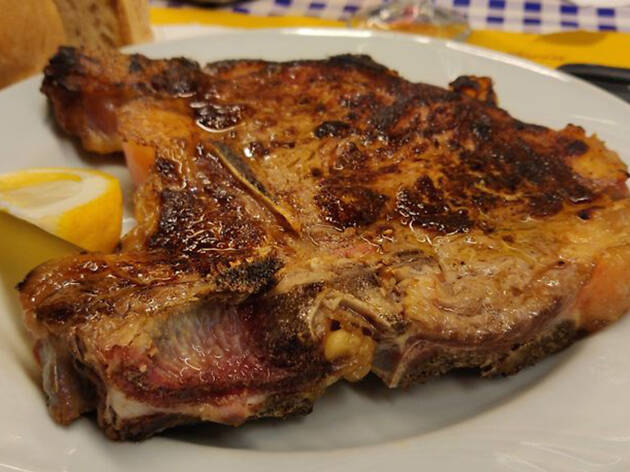 This little trattoria offers family-style seating (you can learn some Italian while here!) at low tables. Join usual diners in ordering carafes of red wine to go along with the rich Tuscan dishes. This place oozes pure Florentine cooking, serving traditional favourites that have been around for centuries. 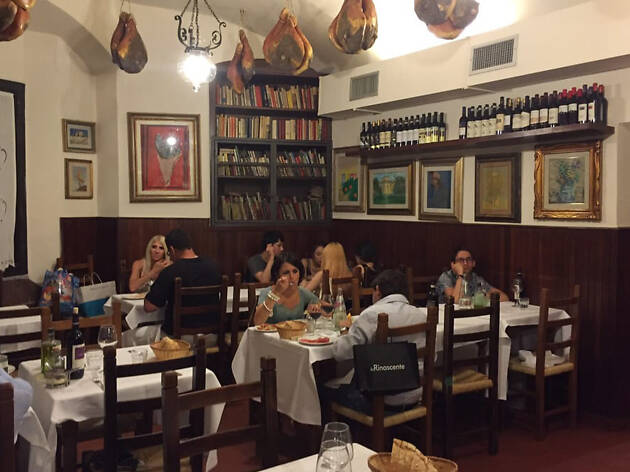 Family run and a local favourite, walking into Il Latini feels like walking into the family kitchen and, well, you sort of are. The traditional Tuscan restaurant tucked into the narrow streets by Piazza Repubblica boasts a full menu of Florentine favourites, from crostini appetizers to a mixed roast platter or Florentine steak. Locals tend to quickly fill up the tables so it’s best to make a reservation in advance. Bonus points: dogs are treated even more generously than their human counterparts here. 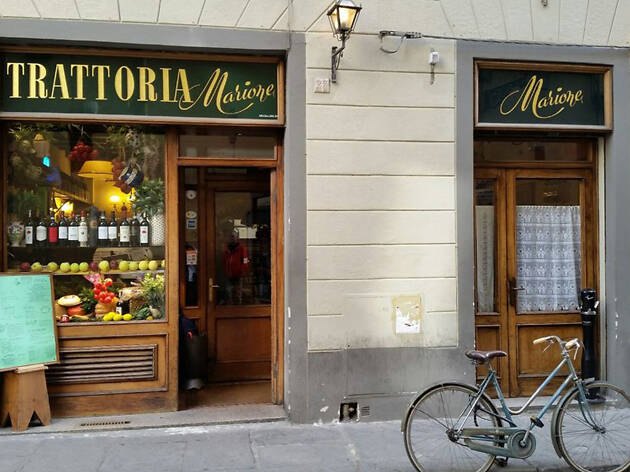 Two words: boar sauce. Old-school style in ambiance and cooking techniques, this classic trattoria is perennially filled with Italians on their lunch break or out to dinner with friends. Make sure to order the seasonal specials and ask for the waiter’s recommendations. Do call in advance to secure yourself a table, especially during Italian holidays. 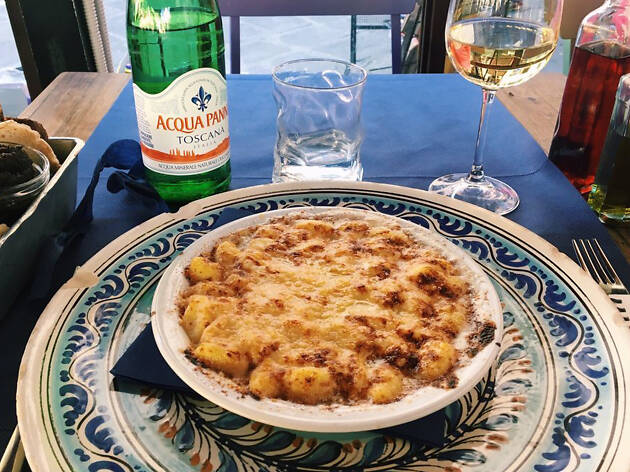 This osteria sits right at the corner of one of the friendliest piazzas in all of Florence, and one that many tourists miss because they don’t venture far enough into the other side of the river. It’s worth the walk, trust us: the portions are larger than most (half-portions are also available... But why would you want that?), the ambiance is purely magical and, most importantly, the sizzling truffle and cheese gnocchi is to die for. 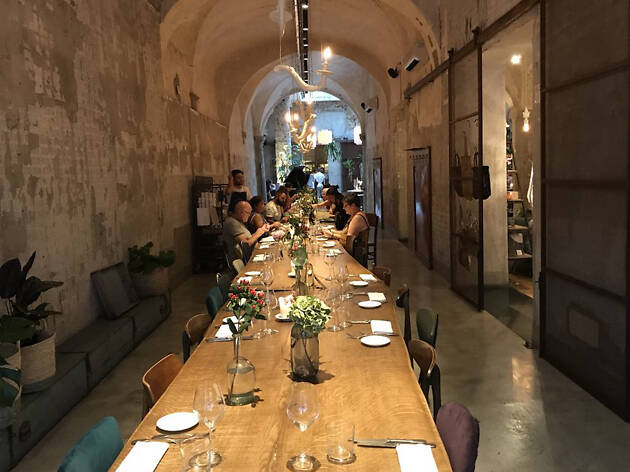 The beautiful rustic charm and unique style that define La Ménagère will immediately catch your attention. Complete with a flower shop inside and a long table that’ll make you feel like you’re eating in a palace, the eatery’s food offerings are just as exciting. The fusion menu is all sorts of delicious, the downstairs bar hosts regular live music nights and a slew of different events takes over the space weekly. Delicious and fun. 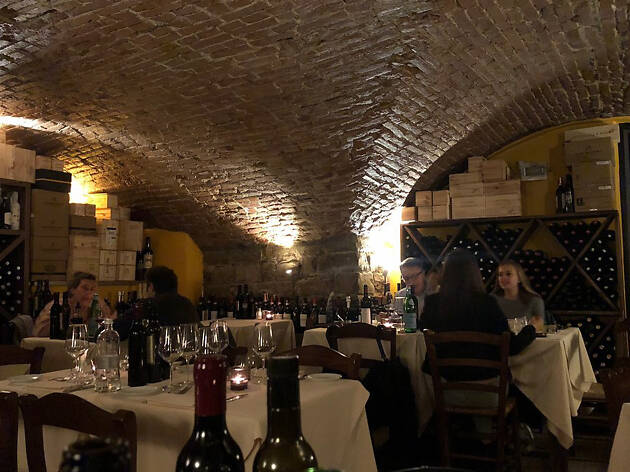 Tucked behind the high windows of one of the city centre’s large palaces, you’d be quick to walk by Parione if not looking for it – a secrecy that makes it that much more of a local spot. In the beautiful cantina, revel in the seasonally fresh Tuscan menu, amazing wait staff service and overall delightful experience. 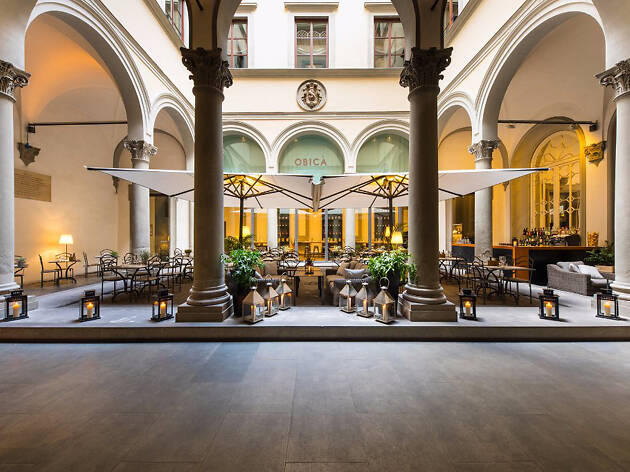 One of the more modern eateries in Florence, Obicá has only been around for a few years but it has already made a name for itself. The sprawling restaurant full of modern flare has a beautiful indoor courtyard and a menu that allows you to pick your favourite mozzarella, ricotta and burrata cheese from around the country. Also admire the wonderful selection of pizza and tagliere, plates piled high with sliced meats and cheeses. 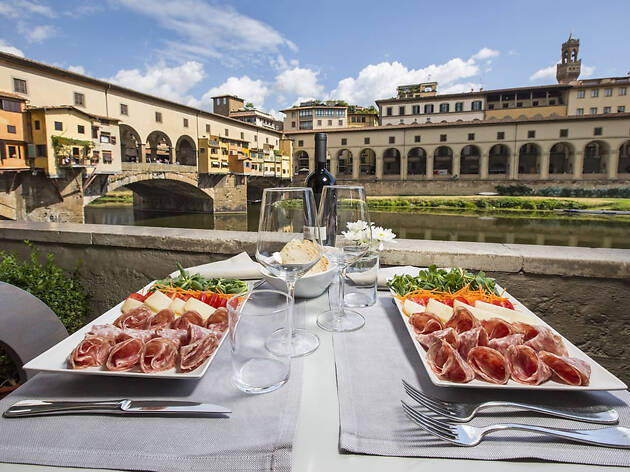 As the name suggests, Golden View is the place to go to if what you’re seeking is a beautiful view. Perched precariously over the side of the Arno river, guests will get to gaze at the famous Ponte Vecchio from the dining room through the large glass windows. Eat everything from oysters to liver crostini in a modernly decorated space that feels like a Renaissance painting. 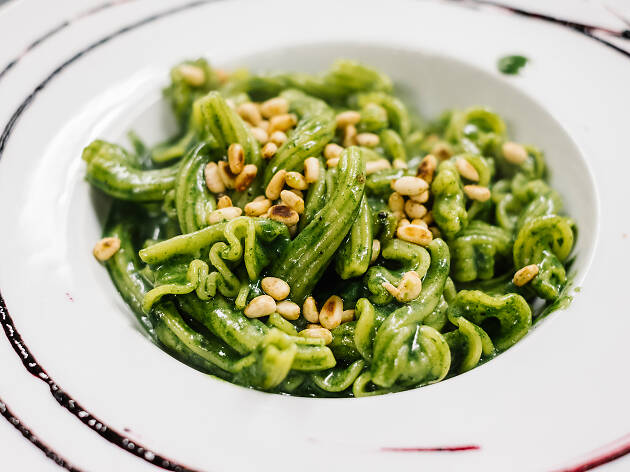 Acqua Al 2 fills their walls with customized plates decorated by customers and is renowned for its chef samplers. Can’t settle on an order? Here, you don’t have to choose. The waiters will bring around small “tastes” of different pastas and salads, hopefully including the famous blueberry steak sauce and balsamic reduction. Yes, a full à la carte menu is also available. 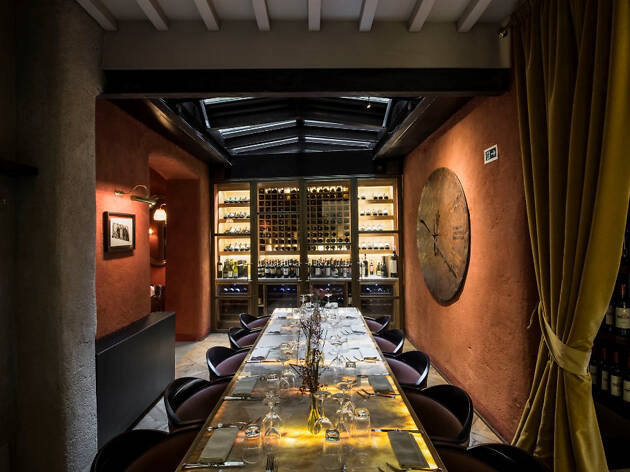 Cucina Torcicoda serves classic Italian pizzas but also likes to get creative (or, as the staff says, "innovative") when coming up with recipes, like the famous spicy 'Nduja topping, which will be your new favourite. The space sits just across the famous Piazza Santa Croce, so you’ll be eating delicious food while gazing out at a beautiful view of the square when sitting in the comfy outdoors area. 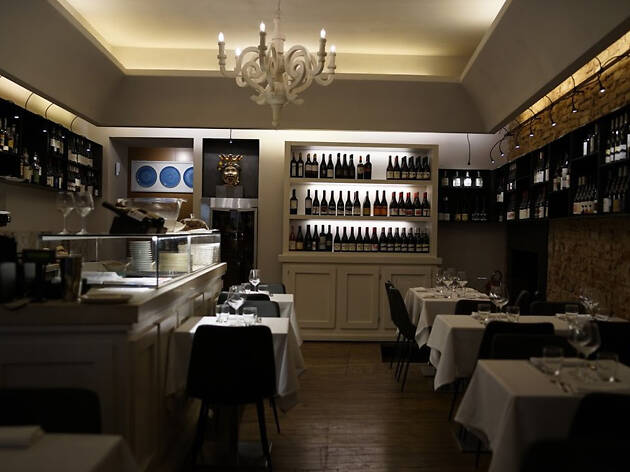 Leaning towards the traditional side of things, Caffé Italiano is where locals go for pizza. Recently renovated, this old-but-new joint still serves the pure Tuscan flavours that many people crave. There are only a few basic pizzas on the menu but, trust us, they’re all you need to eat. On the move? The eatery offers take out as well. 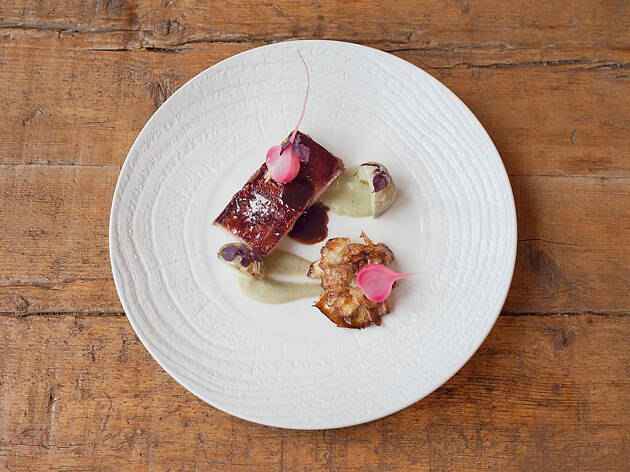 Named after the women that used to sell flowers in the city, this indoor-outdoor restaurant is the perfect stop tucked behind the old walls that visitors gaze at while heading to the famous Piazzale Michelangelo. If the weather is right, dine in the private olive grove on site while feasting on huge plates of meats and cheeses that are hard to come by in the rest of the city. 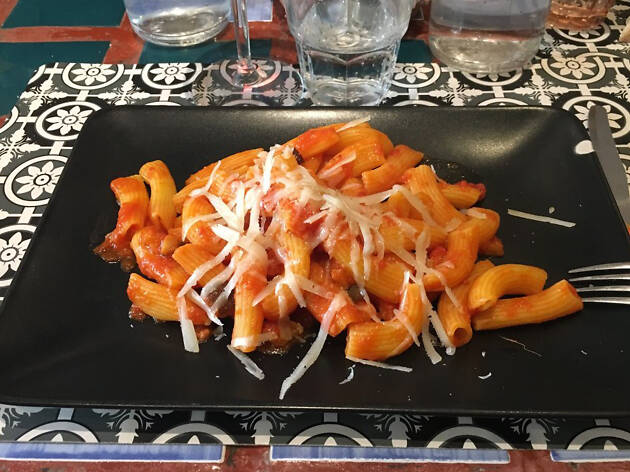 This place is not for tourists: the eclectic decor and tightly packed tables don’t call to mind the sort of ambiance that many look for when visiting. Il Giova is a family-run local lunch spot that’s perennially crowded with folks craving the daily changing menu, concocted by the owners each morning depending on what’s found fresh at the San Ambrosio market across the street. If you notice the fried porcini mushrooms on the meu, you have struck gold. 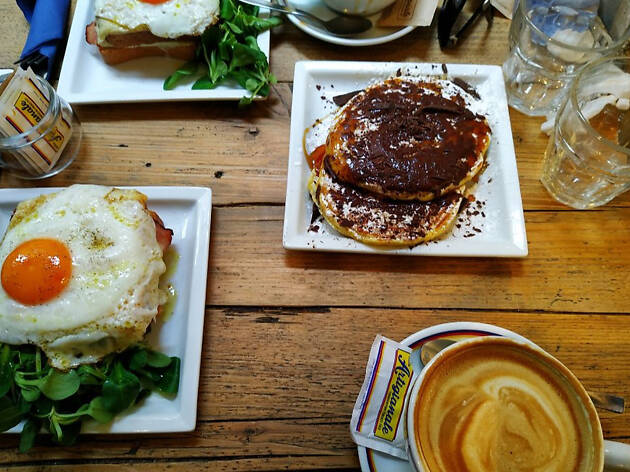 Though more of a coffee shop than a restaurant, Ditta Artigianale is one of the best spots to grab breakfast and the biggest cappuccino in town. There are two locations in Florence and we are partial to the one in the Oltrarno neighbourhood: the outdoor seating area and funky vibe will delight all. 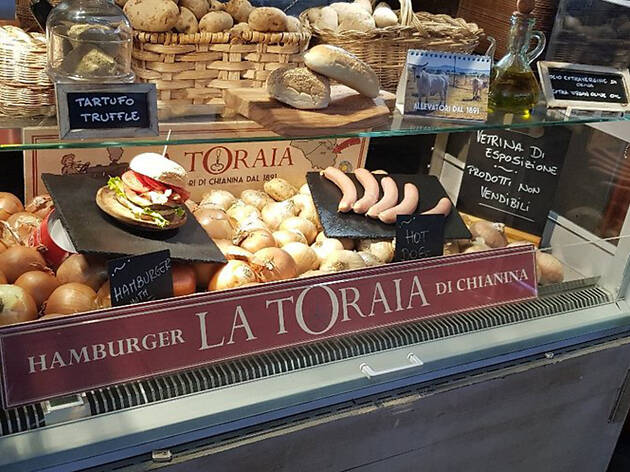 Full disclosure: this is the city’s market and not really a restaurant, but the food court offers plenty of options that you would be remiss not to eat. In the mornings, meat, fish, fruit and veggie vendors take up the ground level. In the afternoons and evenings, head upstairs and take your pick from any of the street-food style stalls serving seafood plates, burgers and gelatos. Eat everything. Trust us. 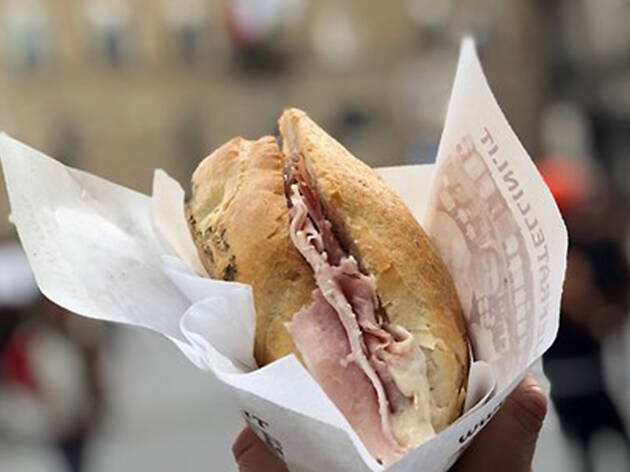 This hole-in-the-wall eatery is the epitome of Italian food culture. Open since 1875, the tiny sandwich shop specializes in bread filled with a combination of local ingredients. Try the prosciutto and truffle, the bresaola, the mozzarella and some of the best tomatoes you will ever taste. You’re handed your order in a paper wrapper so that you could devour it while hanging out on the sidewalk with a glass of wine in hand – there are even wooden shelves on the street to hold your glass as you eat.

Looking to revamp your closet? 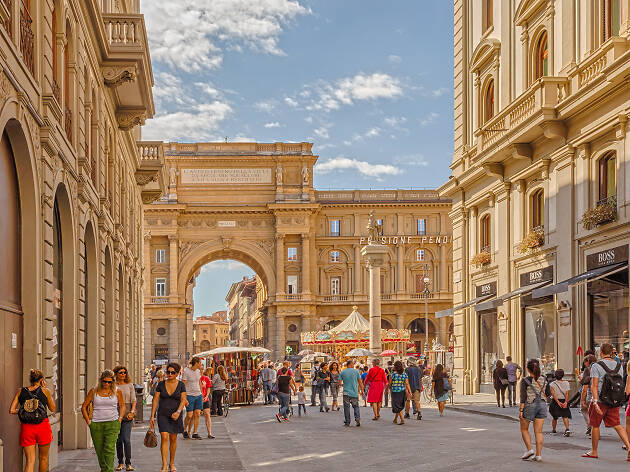 Before the catwalk shows took over Milan, the Tuscan capital was considered the country’s fashion capital, playing host to events within the splendour of Sala Bianca in Palazzo Pitti and rendering all style-related activities the very best and most sought-after things to do in town.