Up to the '70s, many Girona residents headed to the beaches of the south of France if they wanted to sunbathe naked, but since the death of Franco, naturism has gradually become more common along the Catalan coast. In fact, there are now some 50 beaches in the region where nudism is permitted, and on the Costa Brava alone there are more than 20. We've selected the most secluded. 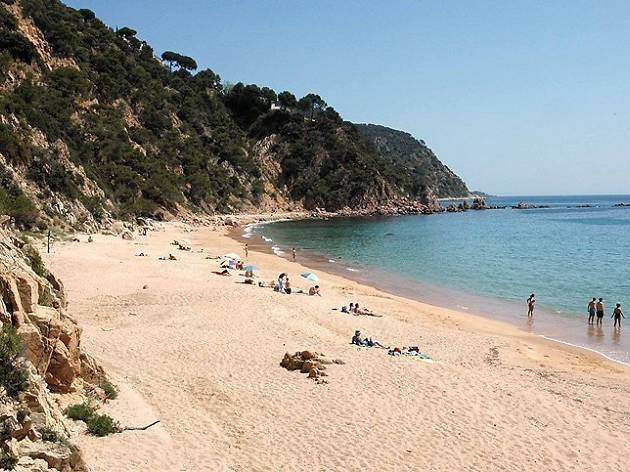 The Cala del Senyor Ramon is the naturist beach par excellence in the Baix Empordà region. A generous length of quality sand gives on to a stretch of sea that is totally open to the east while two bits of rockery enclose it to the north and south, helping to preserve the intimacy of bathers. The Cala del Senyor Ramon is accessible from the sea, by a road (leaving the GI-682 at km 32) that ends up on an esplande just by the beach where they charge €6 to park, or via a footpath that starts in the residential estate of Rosamar. You can also leave the car for free at the top, but the walk back up the hill after a morning of sun is almost guaranteed to induce fainting. Connected to the world only via the torturous road between Tossa and Sant Feliu de Guíxols (it has 365 bends), it's the sort of beach that is ideal for taking sandwiches and the cool box, and spending the whole day swimming, reading and trying to spot spectactors with binoculars hidden in the nearby forest. 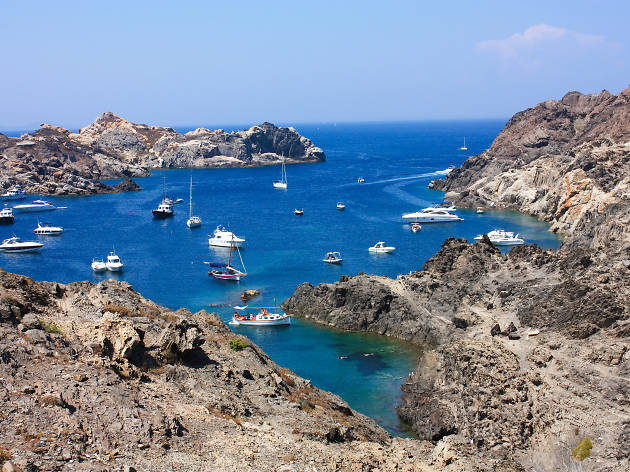 Salvador Dalí and writer Josep Pla both talked about this place, but few people have seen it with their own eyes. You have to get to the Cap de Creus lighthouse from Cadaqués via a road that requires careful driving. Once there, descend on foot along a dry riverbed for about half an hour until you reach a lovely spot with the softly rounded contours of broom bushes that is the complete opposite of the harshness you find in some other parts of this wild coast. What you’ll find there is a welcoming sandy stretch that gives on to a section of sea sheltered from the local 'tramuntana' winds, and has water that is completely transparent and calm. In addition it's home to an extensive range of sealife – bear in mind that this fauna is fiercely protected. It's truly beautiful and if you decide to sleep overnight there during early summer, feeling the sun on your face at dawn will doubtless be one of the most intense experiences of your life. 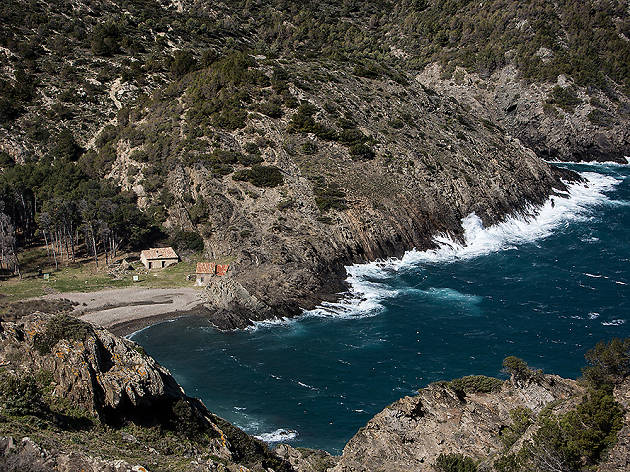 The black rocks of Cap de Creus mark the most easterly point of the Iberian Peninsula, and the wildest part of the Costa Brava, as spectacular as it is treacherous: covered in thousand-year-old remains, and still jealously guarding some of its best-kept secrets. One of them, which we're generously sharing with you here, is Cala Tavallera, located about 2km from Port de la Selva, but only accessible from the GR11, the hiking route that connects Mediterranean with the Atlantic. In some blogs and guides they insist that the beach can be reached by 4WD but the safest way to get there has always been by a two-hour walk that ends with a well-deserved prize: a cove that's practically deserted in summer and winter. It has a shelter for spending the night and witnesses dawns that feel as though a new world has been born. The seabed is fabulous and has a wide range of creatures living on it. At the height of summer many small boats anchor there, but at the start and end of the season, it's very rare to find anybody else there. If you do want to spend the night, it's a good idea to call the local council to make sure the shelter is in usable condition and available. 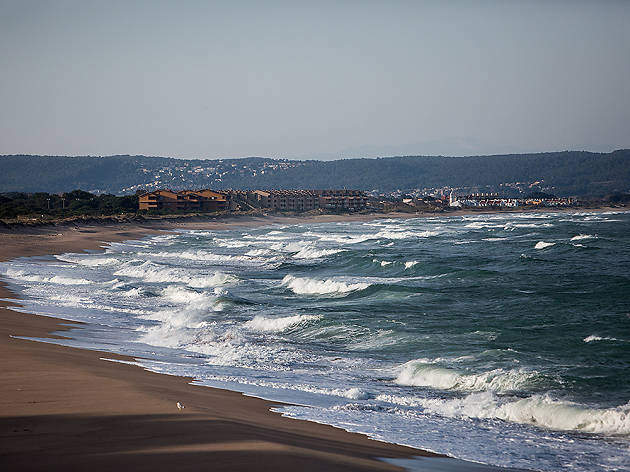 Yes, Begur has a lot of amazing beaches, so why choose this one in particular, which doesn't have any services? Apart from the fact that it's not saturated with beautiful people like Sa Tuna or Aiguafreda, we like it because it's the only nudist beach in the central part of the Costa Brava, because the intense red colours of the rocks that emerge from the bay transforms it into a strange and living place, and because its semicircular shape creates a very inviting beach. It'll also be appealing for some because it remains relatively unvisited by groups or children, as it requires quite a long walk to get there from the Camí de Ronda coastal path. And, of course, in reality the coolest beaches are the ones without ice cream stands and that let you believe for a while that the rest of your life doesn't exist. The only problem is that the high walls of the cliffs that surround it create shade from the mid-afternoon onwards, so make the most of the morning. 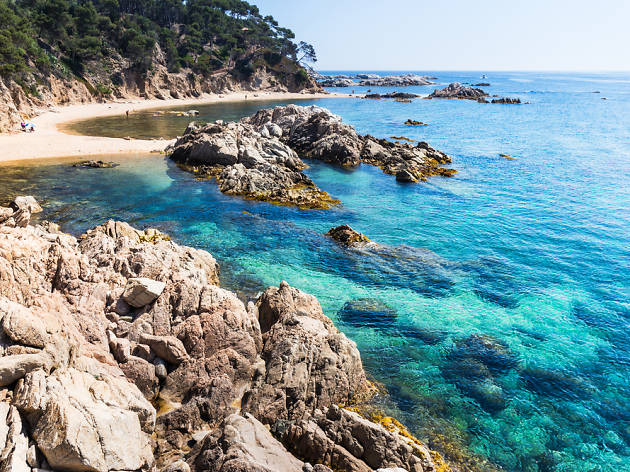 The Alt Empordà region has Cap de Creus and the Baix Empordà has Cala Estreta. The latter is much more modest but that is quite in keeping with this area, considering one of its most famous sons, the writer Josep Pla, would have considered any kind of excess and opulence in very bad taste. The good news is, at the same time, the bad news: in the summer, motor vehicles are banned and to get there means a 45-minute walk from the beach of Castell along the Camí de Ronda coastal path, or, take note, only a 20-minute trek if you follow the service route that passes directly below the electrical towers in the car park of Castell. The effort, however, is directly proportional to the fantastic nature of this series of coves that allow nudism, and are light, open to the east and perfect for sunny winter mornings, although even in the middle of summer they remain relatively tranquil thanks to the long walk needed to get there. If you come across a man with white hair at the 15th-century fishermen’s hut, say hello – his name is Quico and he’s lived there for years. He doesn’t have television or radio because, he says, he has at his disposal an endless 'screen' focused on the horizon, but he'll still show you which rock to head to to get some mobile coverage. This is a place that you must go to at least once in your life, it's as simple as that. 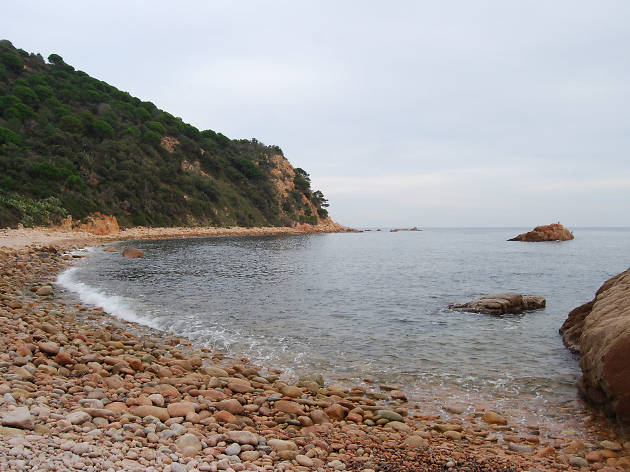 This beach is untouched and when you're there, you won’t catch sight of any man-made constructions. It's as simple and extraordinary as that. To get there, you need to drive along the hideous road that links Sant Feliu de Guíxols and Tossa de Mar, with its 350+ bends, and keep your eyes peeled for a sign that indicates the start of the path down. You can't get there by car, so you should leave it parked at the side of the road. From there it's quite a trek down through a forest – forget about the boho beach look and make sure you wear some good shoes, ones suitable for hiking. The effort is absolutely worth it, though. In the middle of August, you’ll find no more than two or three people on a pebbled beach that measures around 200 metres. It’s nudist and particularly notable for its silence, the complete lack of human paraphernalia and because, despite the total absence of services, it manages to stay pretty clean, doubtless because the few people who endeavour to actually get there are well aware of the need for impeccable environmental efforts for such a special place. If you’re not sure that so much isolation is really necessary, carry on a bit further in the car towards the north and you’ll come to Cala del Senyor Ramon, which is also slightly cut-off but is easier to get to with kids and elderly people. 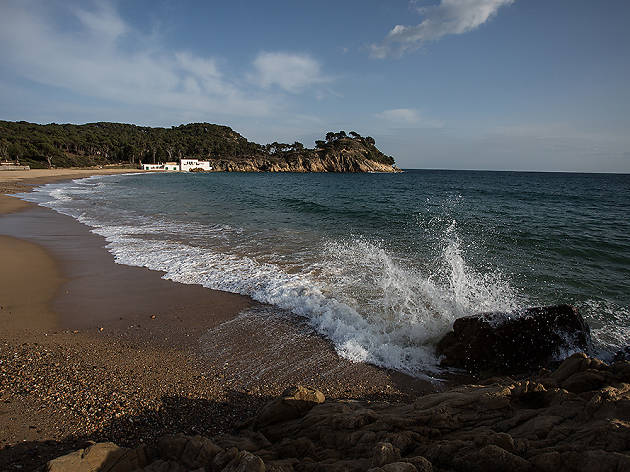 A mass effort by locals saved the landscape around this beach from the developers, and in Castell you'll still find virgin spaces as well as talk of their legendary achievement. The two noble houses that flank it to the north and south have hosted celebrities such as Marlene Dietrich and Salvador Dalí. You get there from the Palafrugell dual carriageway via a road that's in pretty good condition although you still need to drive carefully. Pay the parking fee without regret: everything they earn is reinvested in the conservation of the area. Enjoy the reeds of the Aubí stream (and seeing the ducks and amphibians that live there), have a picnic under the pine trees that give full protection from the sun, head up to the Iberian settlement of Punta de la Corbetera, and get lost in the forest as you search for Dalí's cottage, whose door is surrealistically twisted. Visit the nearby coves where there are impressive corners and not a single line of mobile coverage. In the summer, there are toilets, a kiosk and kayaks to hire, but it's also the ideal beach in winter as it's completely sheltered from the wind.