The White City's got the name, but Haifa's got the game. Check out Haifa's nightlife hotspots

Stuck somewhere between European ideals, Middle Eastern warmth and character and its undying fascination of American culture, Israel is one of the best places in the world for going out and having a good time. The wild Tel Aviv nightlife scene has earned itself the reputation of city that never sleeps, running 24 hours a day, but Haifa has a surprisingly diverse and rich nightlife scene of its own that continues on into the late night hours in the busy city centers.  Here is our pick for this Mediterranean port city’s most sought after bars, pubs, and live music joints – from the trendy to the classy to the purely classic “Haifa”. 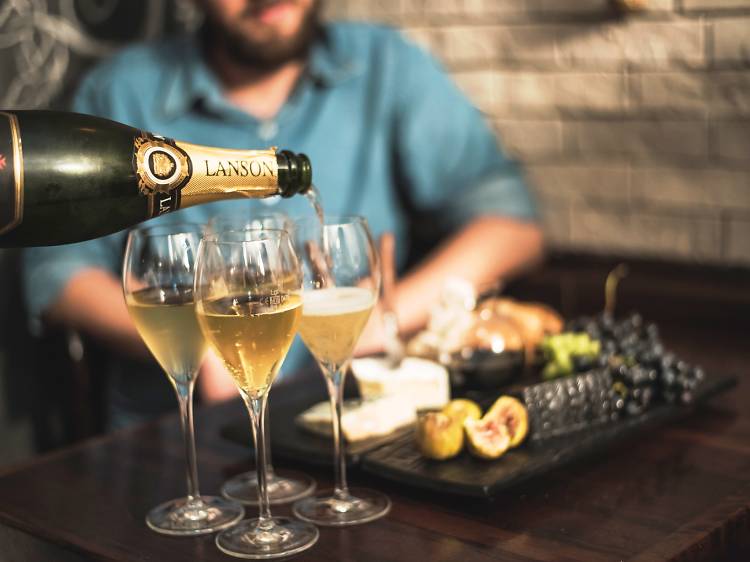 Step into this award winning weekend speakeasy named after the local wineries found in every Italian village, and you will instantly feel an inherent European-style charm. Opened by two sommeliers, Idan Yehuda of Savoir.co.il, and Eyal Mansour, Cantina Sociale is as much of a learning experience as it is a relaxing getaway.  Although it may not be for everyone, this could be your place if you have a deep appreciation for world class wines and carefully prepared little bites that will tease your palate. Wines are paired for you by your gracious hosts, whose passion for what they do flows as freely as the tastes of fine wines, port and other liquors. Not only a must for visiting foodies and wine connoisseurs, but an experience for anyone who wants a special treat, but can’t front the flight ticket to Paris or Rome.
Read more 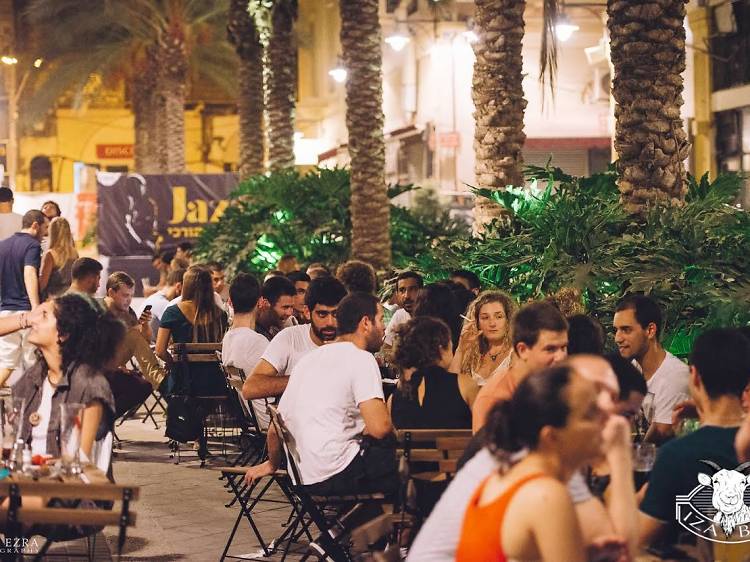 This young bar has fast become the 'it' destination for students who need to take a break from the books and just chill, in this university town. Boasting a clean, well-kept and personable atmosphere, and offering the cheapest rates for high quality tap beer in the city, it's no wonder so many flock there to “take it Iza” as their slogan jests. Gather round the bar or hang with friends at a table inside. You can also sit outside and enjoy the exciting scene of the historical and newly renovated Downtown Turkish market streets, where the bar resides. Cuddle up with freshly laundered fleece blankets in the winter time and sip your drink to ward off the cold night as you munch on menu items, ranging from gnocchi in a pesto sauce with Israeli cherry tomatoes to a grilled smoky ham and cheese sandwich.
Read more
Advertising 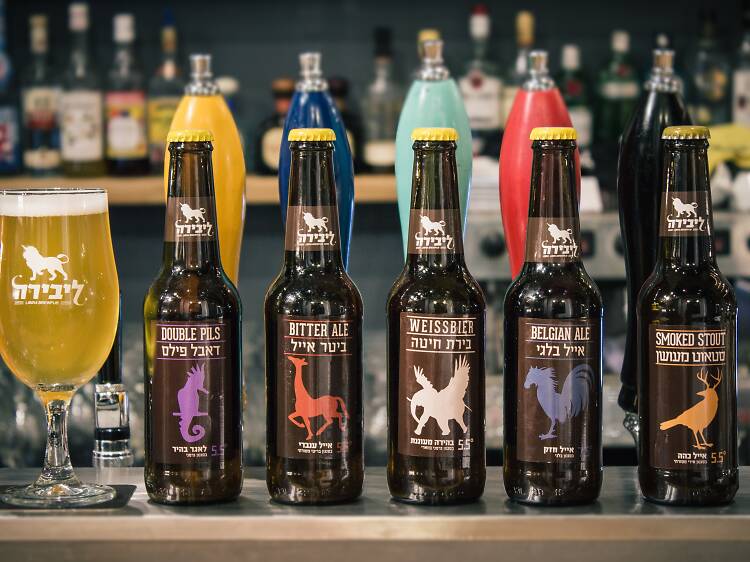 Experience Haifa’s first brewpub, in their expansive new Port Street location, and fall in love with the cool modern-industrial atmosphere, as you sip on their 5 varieties of thoughtfully brewed unfiltered craft beers.  A passion project of former engineer Leonid Lipkin, and his beer brewing partners and friends, it is a place where you’ll want to cozy-in and spend your evening with an ice cold pint and a satisfying burger.  Watch for the monthly guest beer options (some more controversial than others), and inventive rotating menu from in-house chef Roy Avraham. 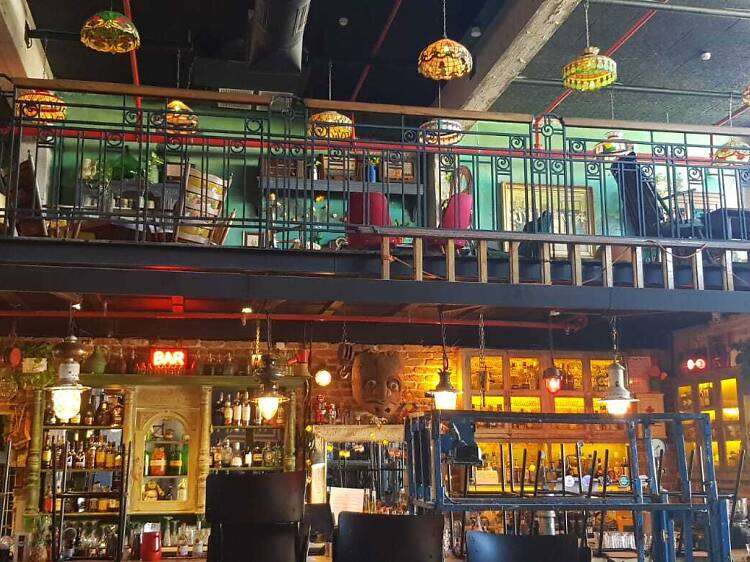 The new Fattoush complex in the port offers food, a bar, music, live performances and an art gallery.  The massive space is two floors and offers an eclectic patio – ushering in completely new blood to the Port. You can see the investment and attention paid to the design, down to the smallest detail. 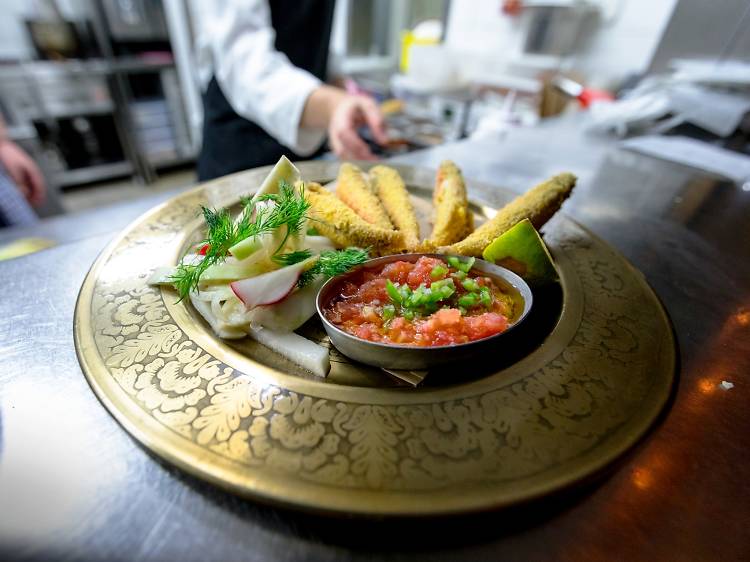 For those who crave an upscale twist on Israeli comfort food, and an exceptionally rich wine and spirits list to match, Sasson Bar is the place to spend your evening. This urban bar with a homey, yet elegant, atmosphere has endless options of good food and drink, and is perfect for a special outing in the upper city. Try their calamari – served seared and not fried, with a dollop of crème fresh and baby greens (a definite winner), or their shrimp risotto flavored with yellow turmeric to remind you how good Israeli fusion cuisine can be. If the wall of whiskey or tempting wine cellar options are not your thing, try one of their craft cocktails, which err on the side of light and refreshing, made with high-quality liquors and delicate garnishes. 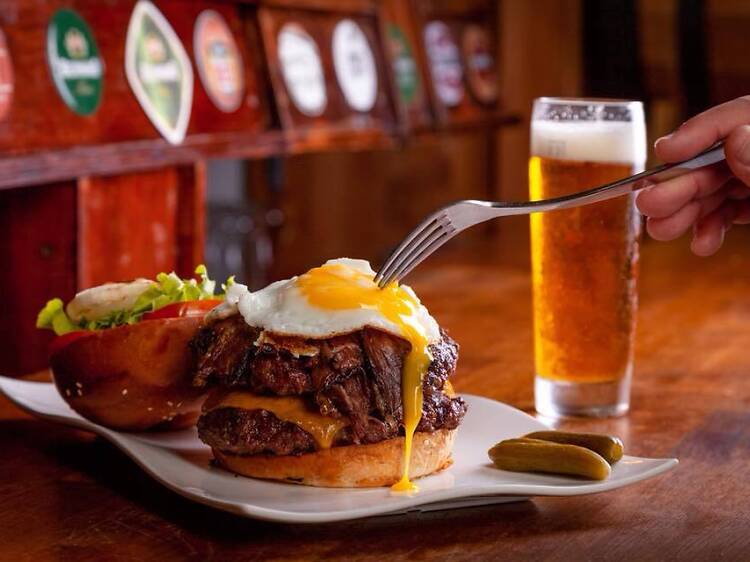 After dark pub, with its 24 beers on tap and wide menu featuring house smoked meats, fish and other specials, is your landing pad for catching up with a good friend or on your beer education. Owner Natai Tolochinsky not only loves his beer, but appreciates the unique subtleties found in the different varieties and boutique brews that he keeps in the pub. Try out the rotating specials, or let Natai and his son, Nadav, guide you through the best of their collection of tap beers, which are kept meticulously at the optimal temperature in their refrigerated beer storage room. Work your way through the menu one beer at a time, or enjoy a sampler of 3 or 5 different drafts in one go. 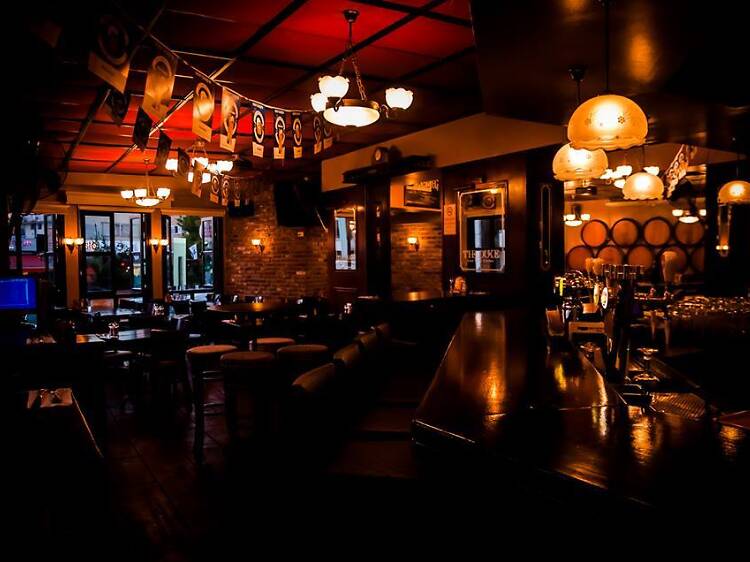 Not your typical Irish pub, The Duke has it all. With plenty of beer flowing on tap, including a rotating selection of local Israeli craft beers (and complimentary salted roasted peanuts to whet your appetite), craft style cocktails and a variety of high quality hard liquors, it’s easy to find something to suit your every mood. Settle in at the comfy bar to take in the big soccer game, or nestle into an intimate corner next to the beautifully exposed brick wall or decorative wine barrel décor, and enjoy the expected (and done well!) pub fare. You can also opt for more refined dining options, such as salmon ceviche served with seasonal fruits and garnished with thinly sliced scallions. 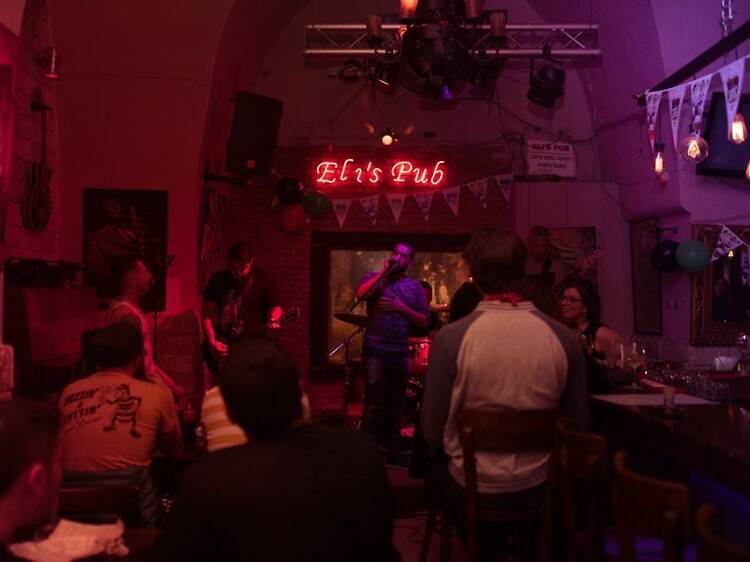 Jet down the Downtown’s newly renovated Natanzon/Yafo street to this classic Haifa live music establishment of 13 years, Eli’s Pub. With a full agenda of weekly jazz and blues jam sessions, often including owner Eli Ifrach himself, and live band concerts (both acoustic and non), this warm neighborhood pub is the place to move and feel the rhythm with soulful Haifa music lovers. Check their Facebook page for the daily schedule, or peer though the bar’s window as you pass by to get a sample of what’s being performed on the stage. 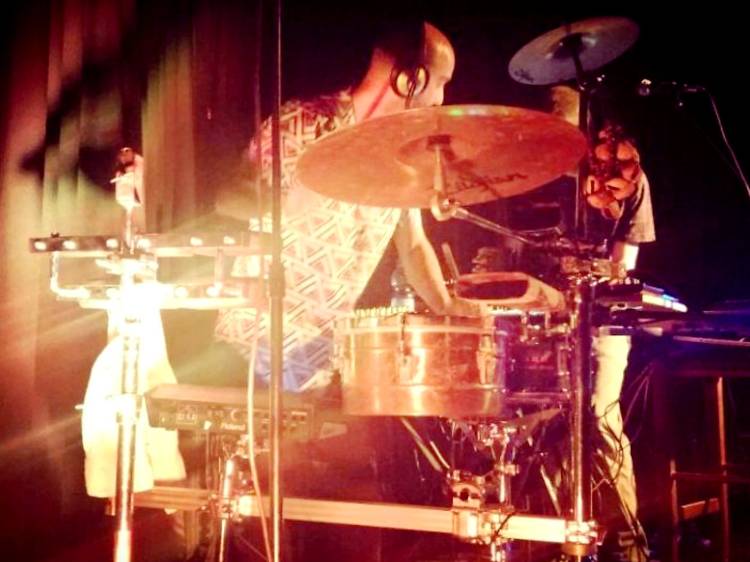 This local dive bar is the place to go to kick back with the locals, and follow the underground Israeli rock and folk music scene (and more). With a funky retro feel, and two floors each fully equipped with a stage for performing and an adequate bar, it is the place to go if you want to find live authentic Israeli music, and regulars to chat with. Pioneers in the Downtown nightlife scene, they paved the way for the many bars and pubs that now stud the area, and still bring a unique flavor to the Haifa nightlife scene that can be soaked in from Sunday to Saturday.
Read more 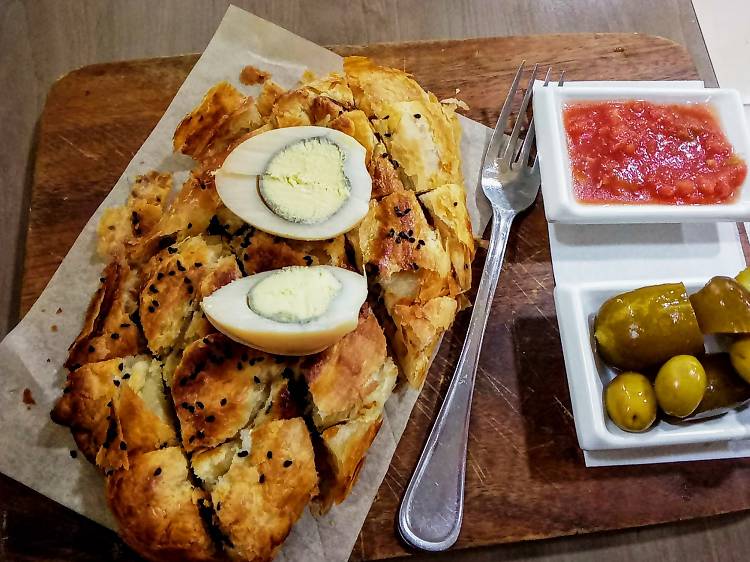 A night out in Haifa’s Downtown is not complete without an end of the night borekas from Borekas Turki M’izmir. Located in the Turkish Market area of the Downtown, and just steps away from many of the area’s bars and pubs, it is a satisfying way to soak up the alcohol once the party has ended. Worker Assi mans the place at night, and spearheads the change from that of a pensionaries’ charming little social club, where borekas are devoured alongside fresh squeezed juice, to a late night eatery, complete with a choice of Edelweiss Austrian or Fucher German lager on tap (Just NIS 12  for half a liter when you order a borekas meal). Enjoy your warm pastry, with a distinct and delicious dough that is stuffed with a variety of savory fillings, together with a slow stewed salted egg, hand grated tomato with garlic and requisite pickle, before heading home to bed.
Read more
SEE MORE THINGS TO DO IN HAIFA
Show more
Recommended