Unisex, gender fluid, and androgynous brands in fashion are now buzz words, but these Israeli stalwarts have been making a name for themselves long before the look became famous. 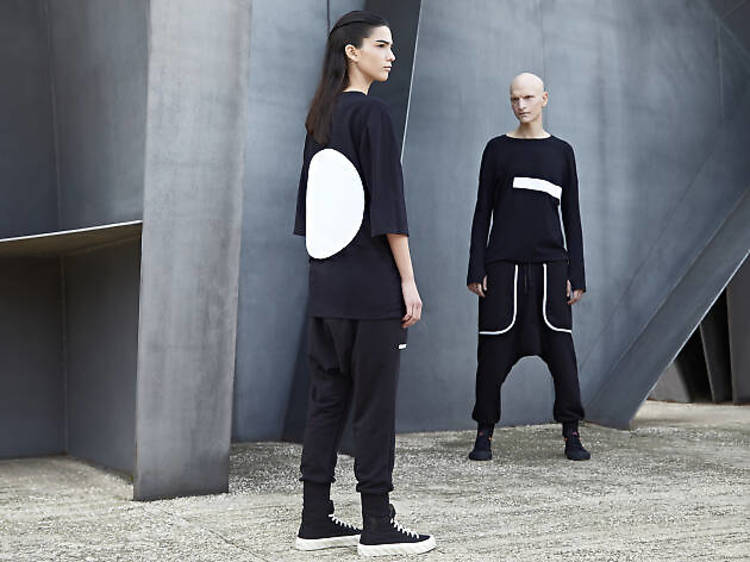 Designers and partners Anuk Yosebashvili and Yaron Shmerkin founded their non-gender clothing brand Vague offering a unique selection of purely black clothing with a unisex appeal. Arresting silhouettes, asymmetrical necklines, and exaggerated draping are staples."I believe that we are at the beginning of a revolution, and over the years, more and more companies are forming with a gender agenda that does not create separation," says Yosebashvili.

"The future of fashion is the canceling of gender separation into a situation that is not an issue anymore." A graduate of Tel Aviv's Shenkar College of Engineering and Designing, with a master's degree in design of footwear and fashion accessories from the Polimoda Institute in Florence, Anuk Yosebashvili is also a former intern for the revolutionary Dutch fashion designer Iris Van Herpen. A similar otherworldly sensibility can be found in Vague's designs. 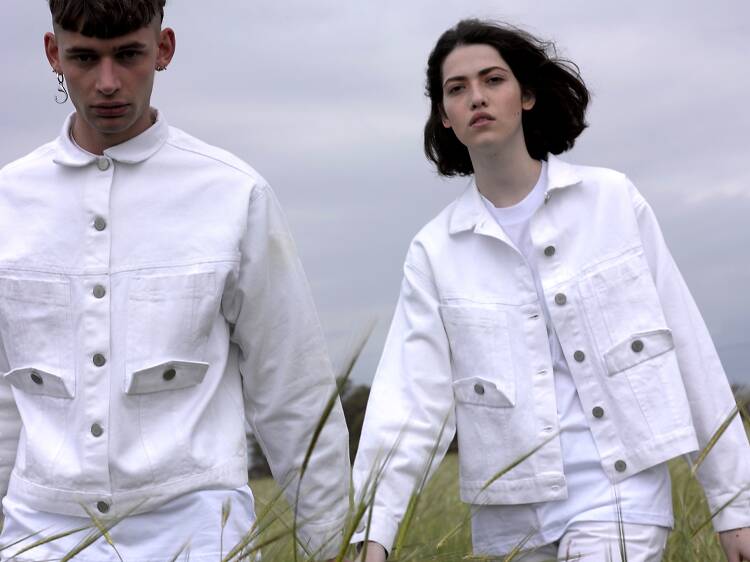 Holyland Civilians is a line of streetwear born out of a passion for fashion. Housed in a designer boutique in Jaffa, the garments include simple designs and bold words splashed across the front of t-shirts, dresses, and hats, paired with unique skirts and pants. After years of working in the fashion industry abroad, designers Anat Meshulam and Dor Chen dreamed of creating a meaningful line in their home country. Comfortable and stylish, Holyland is a political statement, lifestyle, and vibe that nods to both Israel’s religious importance fused with Tel Aviv’s urban feel. 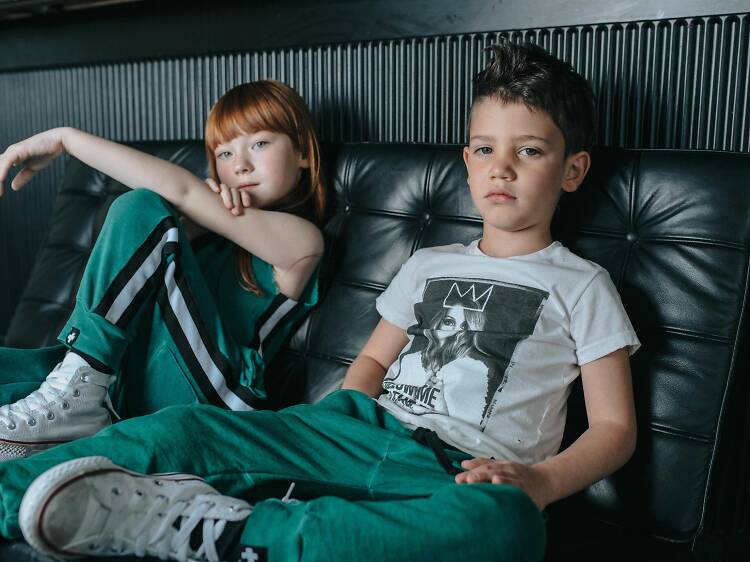 The iconic pop diva Celine Dion is collaborating with the founders, designers and owners of the international children's clothing brand, NUNUNU, Iris Adler and Tali Milchbergand, and together they've created CELINUNUNU, a new fashion brand whose sole purpose is to free children from traditional gender roles. The brand breaks stereotypes and encourages children to be free to find and express their individuality through the clothes they wear, in an equal way.

CELINUNUNU's breakthrough debut collection includes more than 40 models ranging in size from 0-6 months to 14 years, all featuring a gender-free style, timeless cuts, a distinct graphic language and a minimalist palette. The relationship between Celine Dion and NUNUNU was created about eight years ago, when the superstar began buying the brand's clothes for her sons, twins Eddie and Nelson, in Fred Siegel's Hollywood store. The proposal to join forces came to NUNUNU about a year and a half ago through Dion's representative agency, Prominent brand + talent. "I have always loved NUNUNU and what the brand stands for," says the Canadian-French superstar, "so partnering with Iris and Tali to encourage a dialogue of equality sounds like the sensible thing to do. CELINUNUNU allows children to make choices free of stereotypes and norms, influenced only by their tastes and preferences. We help them feel free, creative, inspiring, respectful and happy in the world."

CELINUNUNU is sold at: celinununu.com 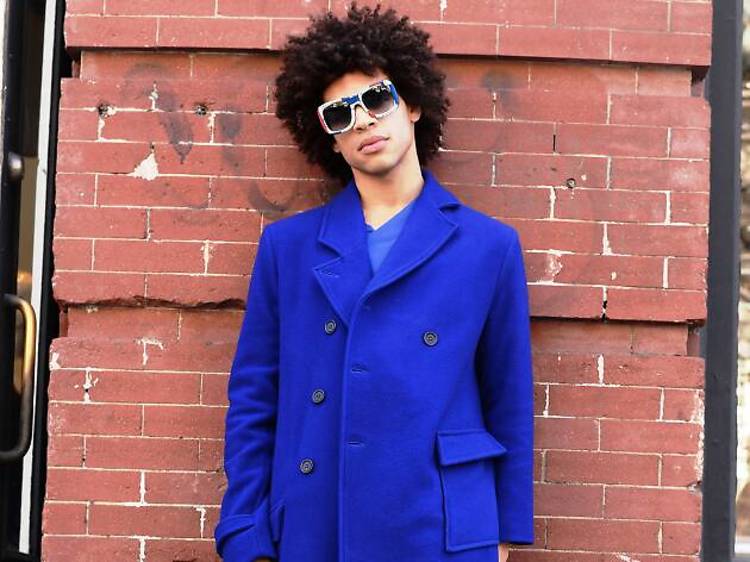 When Lior Reitblatt was CEO of SuperPharm for 23 years, he never imagined himself living his dream of redefining fashion norms and challenging beauty industry standards. He wanted his wardrobe to dive deep into architecture, Japanese minimalist design, and the philosophy of wabi sabi – embracing the ebbs and flows of the world and all of its imperfections. He started to dig into fashion and the way people dress, wondering why everything was so symmetrical and so pleasing to the eye. He found Sharon Ezra, a “Forbes Under 30” contender and young designer who had previously worked in Italy for Prada, Etro, Fendi, and Proenza Schouler among others, and then Romi Faylo, a Shenkar College of Engineering and Design graduate and fashion model, who became the third link in a trio of asymmetrical dreams realized: the brand Wilde Vertigga was born.

The core inspiration for the line is based on Oscar Wilde’s nonconformist way of thinking and his quotes like, “Be yourself; everyone else is already taken”. An aspect on which Reitblatt would not compromise is gender. He wanted the line to represent all facets of an individual, however they may define themselves.

Cobalt blue, coral orange, dusty pink, and cadmium yellow may seem gender specific at first glance, but the fluidity in the colors prove that gender norms are passé. “Though we are misled by our sense of sight, humans are fundamentally asymmetrical. Our minds’ natural tendency is to simplify shapes and interpret vision by reducing data through the brain and completing the partial visual picture transmitted through our eyes,” explains Reitblatt. “Individuals who refuse to compromise on their full self-expression take the rebellious approach, going out in public dressed in their colorful asymmetric attire declaring, “I am different, and proud to be recognized for it.” 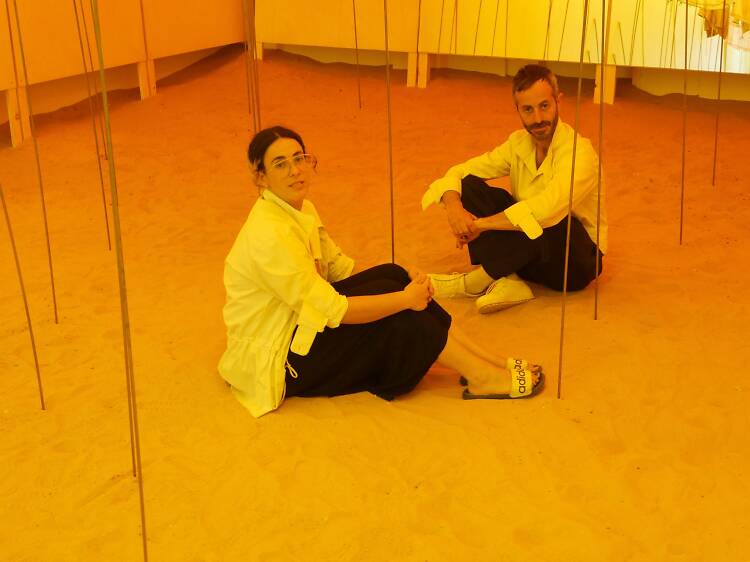 This gender fluid fashion label helmed by Tamar Levit and Yaen Levi is as playful and ironic as it is unconventional. The androgynous wares often sport no sizes. Expect raw, loose cuts and a no fear approach to color. Established in 2011 and based in Tel Aviv and Brussels, the duo produce locally handmade capsule collections, creating fashion installations, performances and spatial works that are a part of the artistic research program in Apass, Brussels.

The silhouettes are structured to blur gender identity as they are designed for men and woman alike. They have been honored for their work internationally and were selected as designers-in-residency at London’s Centre for Fashion Enterprise and ArtEZ academy. It has also been shown as the  Tel Aviv Museum of Art, New York's Tisch Gallery, Jerusalem's Israel Museum and international platforms.