Anna Kendrick is breath of celebrity fresh air on Twitter. Instead of #nomakeup selfies, her account is full of self-deprecating jokes. And in keeping with her reputation for celebrity realness (she even flies economy), when the 31-year-old ‘Pitch Perfect’ star arrives to talk about her new film ‘Trolls’, she’s got a stinking cold like everyone else in London: ‘I feel like I’m being gross!’

In 'Trolls' you play Poppy, a perky pink princess. Did you worry about girly gender stereotyping?
‘I know it doesn’t seem in-keeping with the trend of stronger females in stories for young girls. But for me, the argument is that lots of girls are happy and dress in pink and want to be princesses. Yet at the same time they’re fierce and practical. And Poppy changed as we went along. She got more layers of can-do determination and sass, all within person who is at her core a positive person. And positive is not really my wheelhouse. I'm a real a cynic.’

Do you identify more with Becca, your sarcastic character in 'Pitch Perfect'?
'Yeah, and I think that oftentimes you bring something of yourself to characters. In "Trolls" I brought my cynicism and let it poke through. With Becca I brought my vulnerability. On the page she was too-cool-for-school. Like when a really beautiful woman trips on the pavement and keeps walking, pretending it never happened. You're like: I saw that.’

Talking of trolls, you've got six million followers on Twitter. Have you ever been trolled?
‘I have been unbelievably fortunate. I’ve watched the very moment when a female that I follow becomes the object of a lot of hatred. Zoe Kazan spoke out about the Ghomeshi trial in Canada [radio personality Jian Ghomeshi’s acquittal on sexual assault charges]. She posted something in the most measured way, and it was extraordinary to watch her become the centre of all this ugliness.’

Is there a problem with anonymity on social media that protects trolls?
‘I feel that I prefer to know. Because it’s not as though the internet created these thoughts. People wouldn’t come up and say it in the street. But I feel that I understand the world I live in better. And I know that’s easy for me to say, because I haven’t been the target. But my day will come.’

You seem very genuine on Twitter. Did it take a while to work out that it's easier to be yourself?
‘Completely! The first time I tweeted something sarcastic I was like: sarcasm doesn’t work on the internet. This is going to be terrible. But very quickly, it felt so much better. People connected more than to the “Loving my Saturday!” stuff.’

Have you experienced sexism at work?
‘Yes. But to do a tidy soundbite feels wrong to me. You and I could go and get drinks and talk about it. I don’t want to make some sweeping generalisation.’

I spoke to one actress who talked about being treated like a child on set. People assumed she needed help to cross the street.
‘That’s because they think actors are idiots. They think we’ll wander off into the street and get hit by a car. When we were working on “Twilight” they got everybody out of the trailers, into a van and drove us 20 feet to set.’

Do people underestimate comedy?
‘I’ve definitely heard actors say: “I’ve done a lot of serious movies recently, so I’m going to do a comedy.” That’s underestimating the heavy lifting. A big emotional crying scene takes it out of you, but sometimes it’s so cathartic. With comedy, after 16 hours when you’ve got to do it again, that’s a lot harder.’

What's your fave childhood film?
‘“Annie”. When the “Hard Knocks” scene came on and the little girls were doing flips on the ceiling fans, I was like: “This. Always. Forever.” And the movies I saw too young: “Gettysburg”, “In the Name of the Father” and “Pulp Fiction”. I think they put the nail in the head of my optimism.’

'Trolls' is in UK cinemas from October 21.

Read our review of 'Trolls' 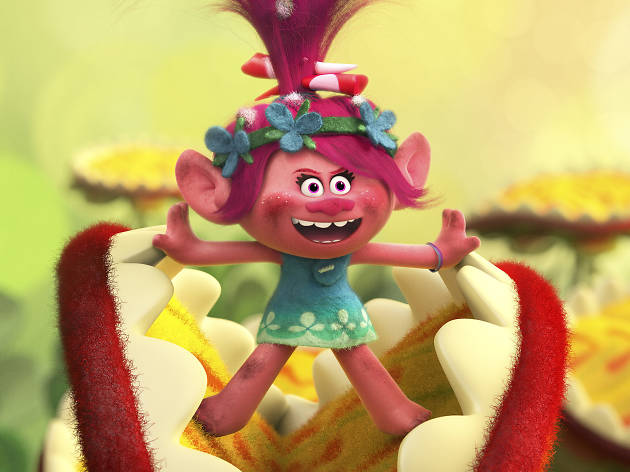 This musical kids’ animation is based on the plastic dolls with frizzy hair that were big in the ’90s. And against the odds, it’s funny and snarky, and just a bit bonkers – like everyone involved has had a little hit of liquid acid.