There are facts that throw your circuits. Like how Poland has a desert or that Nicolas Cage was nearly in ‘The Lord of the Rings’. For me, it was finding out that Antonio Banderas lives in Surrey. Not the Hollywood Hills or a castle overlooking the Med. In Cobham. It’s the kind of thing that could easily turn an interview with the actor into a chat about ring roads and congestion on the M25. But the Oscar-tipped ‘Pain and Glory’, in which he plays a kind of proxy for director Pedro Almodóvar, is his best performance (and film) in years. So, you know, we talked about that too.

Did you have any doubts about playing a version of your director?
‘With Almodóvar, it’s very difficult to doubt. The opposite: it was the movie I needed to do with my friend. We had an experience on “The Skin I Live In” that was tense, basically because I came after 22 years not working with him with a box filled with tools helping me to be more secure in front of the camera. I wanted to show my friend: Look what I am now!  He thought those things were good for my American directors but not for him. When he called me again it was beautiful to know that he’d give his confidence to me to play him. This has been one of the best times of my life as an actor.’

Did that tension linger?
‘No. As we say in Spain, the blood never reached the river. It was just professional discussions on the set [about] how to approach the character. It was: you do it your way and then we’ll do it my way. Of course, he’s the director – he’s going to choose his way [laughs].’

Were those tools there to help you as an actor or a movie star?
‘The star system plays a big part in Hollywood – actors have a lot of say in movies. In Europe, it’s different. The commanding presence is the director. I’d probably forgotten that.’

‘I may be the only actor in Hollywood not in Marvel!’

Do you ever get a sense that a film is going to be great – or awful – on set?
‘If everybody knew, this would be easy. You’d do “Titanic” to be rich and then “8½” to be respected. It’s not like being a writer or a painter; you do it with a lot of other people. It’s unbelievable how meticulous Almodóvar is with everything that appears on screen.’

You’re in ‘The Voyage of Doctor Dolittle’ with Robert Downey Jr next. Who do you play?
‘I play a pirate. [Does a sexy growl] He’s positively dangerous.’

Did you dust off your ‘Zorro’ sword-fighting skills?
‘[Laughs] Not so much. I have a lot of animals around me – at least, that’s what they promised me I’ll have [on screen]. It was actually guys in green suits. I used to pat them.’

Speaking of Downey Jr, have you ever been approached by Marvel?
‘They approached me about this group of Spanish Marvel characters (I didn’t know them) but they never came back. I may be the only actor in Hollywood not in Marvel!’

Are people surprised to discover that you live in Surrey?
‘Yes, because we have a very low-key life. All I can see from my house is deer, squirrels and foxes.’

Do people want to talk to you in Tesco? Do you go to Tesco?
‘I go when I need to [laughs]. I go to Waitrose or Morrisons. People are very polite. The other day, a guy says: [puts on plummy accent] “Are you living here?” I said yes and he said, “Well, lucky us!” and walked away.’

Do you get the train into London?
‘Yeah, or I take my car and park a little bit outside. I don’t like to live in big cities any more. I’ll come in to go to a museum or the theatre – I love going to the theatre – or dinner at Zuma and then back home again.’

Is it true you have a cinema at home?
‘Yes, it’s a huge screen. Our last movie was “Rocketman”. I know Elton John so it was great to see it.’

Lastly, this is your eighth film with Almodóvar. Do you remember his first piece of direction to you on the first, ‘Labyrinth of Passion’?
‘It was very interesting. My character was gay and working in a Madrid flea market. [Pedro] said that this character was looking at guys’ packages. He said, “Do you mind doing that?” That was my first ever shot. I got into movies by the balls.’ 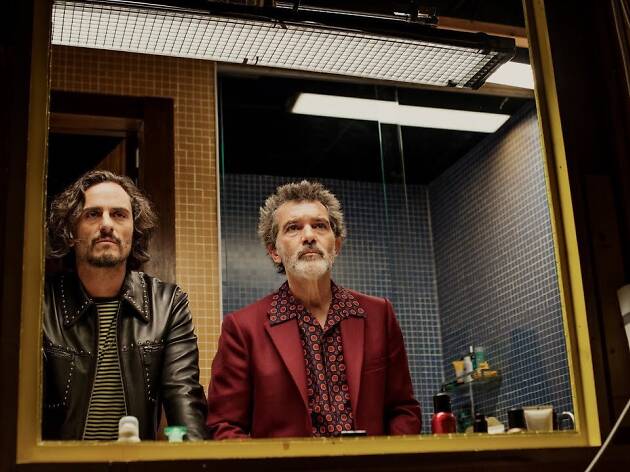