Chloë Moretz has survived Hollywood and teen fame by taking the Natalie Portman approach. Work hard. No scandals. Be nice. She walks into a suite at Claridge’s in Mayfair holding a giant smoothie. Technically, her publicist is here to chaperone her, but she’s glued to her BlackBerry next door. And besides, Atlanta-born Moretz is practically an old pro. She played an assassin at 11 in ‘Kick-Ass’, a vampire at 12 in ‘Let Me In’ and worked with Martin Scorsese on ‘Hugo’ at 13. Now 16, she can handle herself.

You’ll know this if you saw her splattering villains and dropping the C-word in ‘Kick-Ass’ – (or ‘Kick-Butt’ as it was known in the Moretz house) in 2010. She was the best thing in the film of Mark Millar’s comic book, as Hit-Girl – pint-sized avenger Mindy Macready, who comes to the rescue of a high school nerd who thinks putting on a green wetsuit makes him a superhero. Now she’s back with the sequel, which finds Hit-Girl all grown-up and starting high school.

Moretz knows people will think she’s spoilt. ‘They think you’re going to be mean. You have to counteract that,’ she says earnestly. ‘I’m not that girl.’ What makes her instantly likeable is that she’s not trying to act older than she is. Yes, she talks more articulately than most 30-year-olds, but she OMGs like a regular teenager, and get her on Rihanna and she’ll be talking for hours… without a single swear. ‘My mom is very strict. I’m not going around cussing.’

Still, the easily offended will be offended again by Hit-Girl in ‘Kick-Ass 2’. Which is weird. Because Chloë Moretz is a kick-ass role model.

All these dark roles. Don’t you ever want to play the nice normal girl in a romcom?
‘No! I love watching those movies. Those are my favourite movies. And that’s me: Chloë, the happy-go-lucky girl. But I like roles that are the super-opposite of who I am. I live such a happy normal life. It’s kind of nice to be someone that I’m not.’

How has Hit-Girl moved on since ‘Kick-Ass’?
‘She’s definitely growing up. When you meet her she’s still in that 11-year-old state of mind. But by the end of the movie she’s become an adult. We show who Mindy really is in this one. In the first film we never really saw the girl behind the mask.’

How tough are you? Could you take down a mugger?
‘Ha! I hope so. Gosh. I’d probably run in the other direction: “Take the purse!” I would never die for mugging. But I am tough enough. I’m hardcore.’

What would your superhero power be?
‘Breathing underwater, so you could explore the ocean. It’d be so sick! We know more about space than about the ocean.’

You get a snogging scene. Are you moving into more grown-up roles?
‘Yeah, it’s a transition. I’m trying to figure out how far to go. What to do when. But I’m not a risqué person. I don’t wear risqué outfits. That’s not me. My movies reflect that. I do violence but I don’t think I’m ever going to do over-sexual roles, no matter how old I get.’

Have you turned down films because they’ve got too much sex in them?
‘Yeah. And sometimes it’s just too old. You think: Oh my gosh, this is such a good role, but I’m not there yet. I’m not ready for that.’

That’s incredibly self-assured.
‘You have to be. If not, you’re going to be pushed around.’

I bet no one pushes you around.
‘Not any more.’

Did you learn that early?
‘Yeah. A lot of people wanted a piece of what was becoming me. And there’s always someone trying to push you somewhere you don’t want to go. My mom always protected me. She’s my greatest advocate.’

Is it true that you take your own meetings in Hollywood?
‘Yeah. My mom drives me to them. But she chills in the lobby and lets me do my thing.’

Do producers ever still talk to you like a kid?
‘Yeah, but they learn pretty quickly if you answer in a sophisticated, adult-like manner. I try and show people that I’m smart and that I know what I’m talking about. That’s what I try and do: I’m not stupid. This isn’t just a face. There is a brain.’

You’re a successful actress and a businesswoman at 16. Can your mother still tell you what to do?
‘Oh yeah. Definitely. We bicker back and forth but she’s my mom. They can always tell you what to do, even when you’re 30. Your mom always has the last word.’

You grew up with four big brothers. How was that?
‘I’m still growing up! It’s fun. Like growing up with four dads. I always have someone to hang out with. I get along really well with guys, too, because I’ve grown up with them.’

Have you seen kids around you go off the rails?
‘I can kind of see it start to happen at this age. Kids I knew when I was younger; you see them getting kinda crazy. It happens at 19, 20. That’s when it all comes out.’

You think you’ll be okay?
‘I think so. My mom would lock me in my bedroom if I was going off the rails.’

Does being a famous teenager make it hard to trust people?
‘Yes. I mean definitely. I think if you’re a smart person you keep your cards close to your chest. You don’t let anyone in. You have to make sure that someone’s not trying to be friends with you for the wrong reasons. You never know who’s going to be out there to bring you down.’

How does that work with boys?
‘Same thing. Even worse, because you really like them. Not only are you getting a best friend, your emotions are wide open. It’s like an open wound.’

You’re also in the new ‘Carrie’ film. In a fight, who’d win? Hit-Girl or Carrie?
‘Carrie. She has telekinetic powers. She could just pick Hit-Girl up and be like: “No, you’re not going anywhere.”’

Would you describe yourself as a feminist?
‘Definitely. I don’t do damsel-in-distress roles. And there’s not a lot of roles out there like that. We broke the glass ceiling in the ’80s, but the whole idea of the strong woman has kind of dwindled. It’s still all about the leading man. We need to get movies that are all about the leading woman.’

You’ve got 570,000 Twitter followers. Who’s your favourite person on Twitter?
‘Cher. She’s awesome and she rants all the time about the most random things ever.’

You take a pretty mean selfie (check out www.instagram.com/cmoretz). Any tips?
‘Try and make it look like you accidentally took the selfie.’ 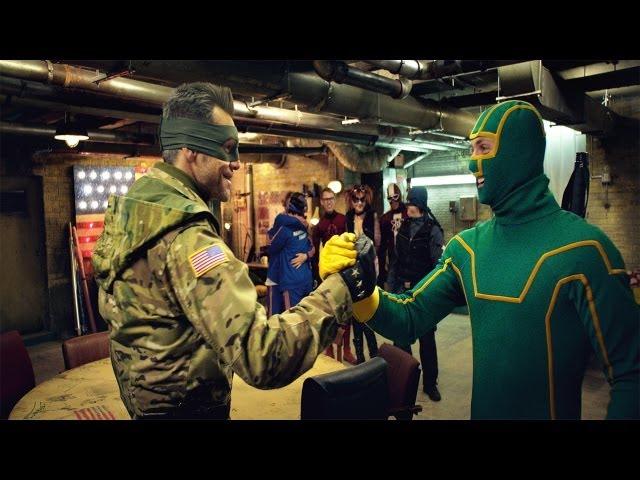 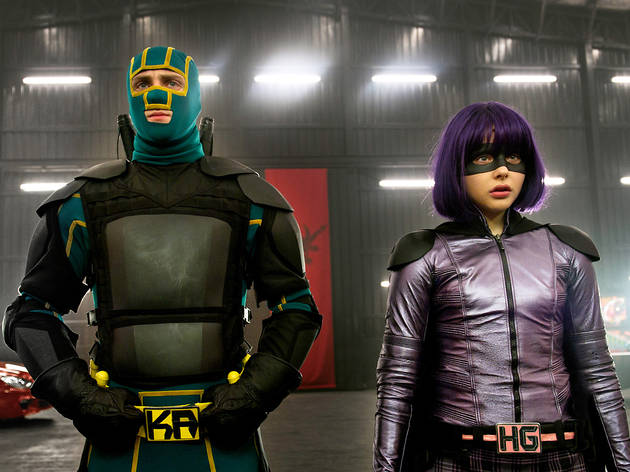 The best thing about ‘Kick-Ass’ was Moretz, and Hit-Girl still gets the best lines. Like the first film, ‘Kick-Ass 2’ pulls the reality of teen life into its fantasy. But Hit-Girl was homeschooled on the weight-to-velocity rates of bullets. So how will she now deal with classroom bitches? The answer is a little lame.