Saddle up for Time Out’s in-depth guide to the most rootin’, tootin’ film genre of them all – the western. From golden age classics to hard-hitting revisionist dramas plus a hearty helping of spaghetti, here are 50 films to make you yearn for the days when men were men, women wore bonnets and guns were the only law…

Jesus may have not packed a six-gun, or spent most of his wages being ‘entertained’ in the back rooms of a border town saloon by some chiffon-clad minx called Saucy Sue, but there are mythic, quasi-religious allegories everywhere you look in the western genre.

One person who was clearly aware of this – and took full advantage of it – was Peter Fonda, who was able to direct this chilled-out fable of a hippified west – in which a band of weary travellers choose to re-embrace rustic minimalism – following the success of 1969’s ‘Easy Rider’.

It’s notable mainly for its incandescent, magic-hour photography care of cinematographer Vilmos Zsigmond (the skinny-dip opening scene is terrific) and the whispered exchanges between the key cast, Fonda, Warren Oates and Verna Bloom. But proceedings are hampered somewhat by the narcissism of its director-star, who can’t resist top-and-tailing so many scenes with a fashion-shoot-style self-portrait in which he adopts some angular pose and glances pensively into the middle distance like some Laurel Canyon messiah.

It’s an appealing take on the cowboy code of honour, even if it’s not technically ‘great’. DJ

Read more about 'The Hired Hand'

Oh bury me not on the lone prairie

But, you cry, ‘Lonesome Dove’ is a TV mini-series, not a movie at all! Well, let’s look at the credentials. Adapted from a book widely considered the best ever written in the western genre, a book written by Larry McMurtry, author of ‘The Last Picture Show’ and ‘Terms of Endearment’, and starring not just Duvall in his prime, not just Jones and Glover on the verge of theirs, but a whole host of great movie character actors including Diane Lane, Frederic Forrest, Angelica Huston, Chris Cooper and William Sanderson, this is as cinematic as TV gets.

Sure, it was directed by a guy poised halfway between ‘DARYL’ and ‘Harley Davidson and the Marlboro Man’, but we’ll let that slide: in its epic emotional sweep, in its breadth of landscape and action in its depth of character and awareness of history, ‘Lonesome Dove’ is every bit as artistically valid as half the movies on this list – and it’s a damn sight more entertaining than most of ’em. TH

It’s the bullets you remember. Kevin Costner’s terse, unshowy follow up to (and apology for?) ‘Dances with Wolves’ has lovely, soft-spoken dialogue and near-perfect characterisation, gorgeous period recreation and a darkly compelling sense of mounting intensity.

But what really sticks in the mind are the sound effects he used for the final showdown: eschewing the usual polite Hollywood popguns, these weapons feel close, real, rusty and unpredictable.

It’s just one of the many fine, honest, unostentatious touches which pepper this unsung modern western, a film which, for all its apparent lack of ambition and easygoing charm, leaves an unexpectedly deep impression. TH

The life and death of a man of character

Less a spaghetti western than a ploughman’s western (honk!), Michael Winterbottom’s wintry morality play relocates Thomas Hardy’s ‘The Mayor of Casterbridge’ from Wessex to the West Coast to startling effect. Wes Bentley – wooden but, for once, quite winning – plays a railroad surveyor newly arrived in Irish immigrant Peter Mullan’s northern Californian fiefdom of Kingdom Come (you can hear the fates conspiring already!) to assess whether the Central Pacific is fit to pass through.

The enormous boon this might generate for Mullan and the town inspires dirty politicking, gut-wrenching revelations, a swooning love story, thunderous shootouts and an impossibly moving climax. Modern sensibilities hold sway throughout, and it’s an undeniably European take, but this is still a fine western in the most classic sense. ALD

Read more about 'The Claim'

’Til the end of the day

‘Oh, give me a home with a low-interest loan, a cowgirl and two pick-up trucks. A colour TV, all the beer should be free. And that, man, is Rancho Deluxe!’ The ’70s produced a gold rush of moseyin’, mournful modern-day westerns such as Paul Newman and Lee Marvin’s broke-ass last cattle drive ‘Pocket Money’ and easy-going Steve McQueen rodeo lament ‘Junior Bonner’ – films in which the cowboy way continued to exist only as a dodge for forgotten men or as a fading carnival sideshow.

The feel was invariably elegiac, yet the film that edges them both off our list, the marvellous ‘Rancho Deluxe’, achieves a tone close to mockery. Scripted by Thomas McGuane – writer of ‘The Missouri Breaks’ and ‘Tom Horn’ – and starring Jeff Bridges and Sam Waterston as a couple of smaller-than-small-time Montana rustlers, it’s a sweet, strange, sad little film that presents the west as a nine-to-five refuge for throwbacks, affected playboys and the outright deluded, all stung by the realisation that the chairs are on the tables.

The last waltz has played itself out and nobody even bothered to dance. ALD

The western ain’t traditionally woman’s work: if the number of oaters featuring women in a starring role can be counted in, at very most, double digits, the number with a female at the helm must be down to the fingers of one hand: in fact (and please correct us if we’re wrong), the only one we can name for sure is Maggie Greenwald’s ‘The Ballad of Little Jo’.

So for Kelly Reichardt to come out swinging with such a confident, uncompromising frontier story – albeit one which upends just about every tradition the genre holds dear – only proves her incredible strength as a filmmaker. True, the film’s implacable pace, ambiguous characterisation and wide-open ending will likely infuriate and horrify western purists – but that is no bad thing. TH

From bad to terse

The dictionary defines ‘stark’ as ‘forbidding in its bareness and lack of any ornament, relieving feature or pleasant prospect.’ It’s a description that gets as close as possible to describing accurately André de Toth’s offbeat western set in the Oregon hills.

Whether in regards to the crisp, harsh photography, the series of tense stand-offs that frame the narrative or the punishing final ride into the snowy wastes. Robert Ryan excels as the murderous cattleman come to town to hunt down the pesky varmint who has been fencing off the icy pastures on which his cattle used to chomp.

Instead he finds himself desperately defending the town – with his wits as often as his Winchester – against magnificent bastard Burl Ives and his especially vicious gang of on-the-run desperadoes. Fierce, intelligent, exciting and just about as stark as they come. ALD

The Penn is mightier

It’s in the deep cuts of the Missouri River as it snakes through Montana that we find the soggy-bottomed romance and pantomime sadism of Arthur Penn’s schizophrenic range western.

Rustling is the name of the game but the plot rides pillion to a series of darkly comic existential vignettes in which death and desperation play out an escalating series of uneasy two-handers.

As such, it’s a complex/clever-clever western that doesn’t work for everyone. Does Jack Nicholson’s inalienable urbanity distract from his performance as a raggedy-ass dirt farmer?

Do the ludicrous acting choices afforded Marlon Brando by his star-power detract from the lethality of his character? Does Arthur Penn’s hands-off direction allow the plot eventually to settle into a roundelay of psychic showdowns and pornographic violence? The answers to all are ‘yes’.

But then, the frontier was replete with displaced Easterners, insane poet-warriors and purposeless brutality, so maybe it’s time a film that’s too often dismissed as a top-heavy, blow-dried vanity project is given its dues. ALD

Read more about 'The Missouri Breaks'

Blood on the tracks

If Sam Peckinpah forced open the floodgates of balletic, consequence-free screen violence with ‘The Wild Bunch’, then it was Robert Aldrich’s gory cavalry western which presented the grim realities of range warfare. Not 20 minutes in, and we’re shown three Apaches playing a game of catch with a dead soldier’s innards. Not much later, an old yokel is punished for defending his patch o’ land by being scalped.

And having his face pulverised. Burt Lancaster keeps the toothy grins in lockdown as MacIntosh, a grizzled tracker with an Apache sidekick who is drafted in to the US cavalry to help put an end to a string of savage attacks undertaken by irate Apache chief, Ulzana.

Its central conceit – that it’s only natural to be driven to extreme violence when witnessing the suffering of friends and countrymen – may feel a little reactionary to contemporary eyes, but it remains a hard-hitting and rugged adventure movie that makes up in charisma and suspense what it lacks in political correctness. DJ 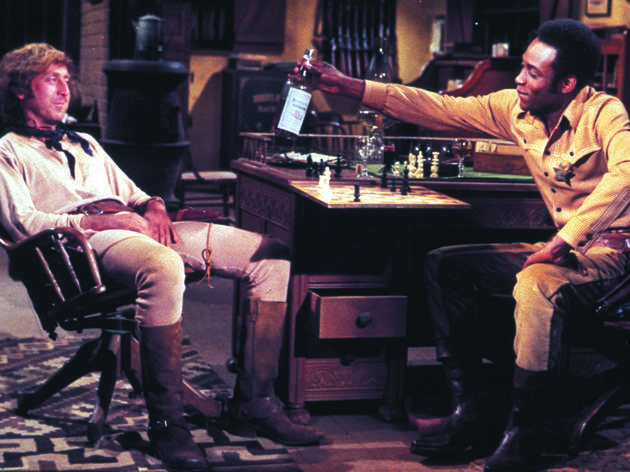 By 1974, the traditional western was sailing so close to self-parody that it would’ve been easy for Mel Brooks to take an old plot, stuff in a few bad puns and call it a day. That he instead turned to Richard Pryor, then on the very edge of superstardom, to help him craft a film which would be not just funny but edgily relevant says a lot about Brooks’s willingness to take risks – once upon a time.

The result may be imperfect. Pryor really should have been allowed to play the lead, and the entire subplot with Madeline Kahn as lisping Teutonic chanteuse Lili von Schtupp is bizarre and inexplicable. But ‘Blazing Saddles’ contains enough glorious one-liners (‘Mongo only pawn in game of life…’), iconic scenes (the campfire, the rogues’ lineup, the set-shattering finale) and sheer genre-busting bravado to carry it through the cactus patches. TH