‘I can’t control it!’ Caleb McLaughlin from ‘Stranger Things’ is struggling to recover from a laughing fit. Tears are streaming down his face as he splutters: ‘Keep talking, I’m gonna get a tissue.’ He’s been set off by fellow star Gaten Matarazzo. The 15-year-old just told a story about Caleb farting on the bus during shooting. Apparently, it smelled so bad that the entire crew had to get off. ‘I’d had a burrito,’ stresses Caleb. ‘And it was that time of year.’ ‘February  is his fart month,’ says Gaten.

Making a 16-year-old cry wasn’t quite what I’d planned when I arranged to meet Caleb (who plays sensible Lucas), Gaten (goofball Dustin) and their 13-year-old co-star Noah Schnapp (weedy Will). The lads were virtual unknowns when they got cast alongside Finn Wolfhard (natural leader Mike) and Millie Bobby Brown (psychic Eleven) in ‘Stranger Things’. Since appearing as the Dungeons & Dragons-playing group of pals in a small town hit by supernatural happenings, their lives have been very different.

The Netflix sci-fi show has gained cult status and so have its stars. Their characters have become memes, action figures and Halloween costumes. They’ve been on the cover of fashion magazines and appeared in viral videos. Finn starred in the hit film adaptation of Stephen King’s ‘It’. Gaten has become a spokesperson for the genetic disorder cleidocranial dysplasia, from which he suffers. In fact, while a lot of the mass appeal of ‘Stranger Things’ lies in its nostalgic ’80s references, gripping storyline and slick production, it’s the kids that everyone has fallen in love with. Even if they do have a habit of farting in enclosed spaces.

What’s been your favourite moment on the show  so far?
Caleb: ‘The first scene of season one when we’re playing Dungeons & Dragons together. It was the first thing we filmed. That’s when we all started to get to know each other.’
Noah: ‘We were laughing and there wasn’t a lot of pressure on us.’
Gaten: ‘I think that’s also the moment when all the adults on set said, “That’s my childhood.” Then it changes and a monster takes Will to another dimension. Just a small inconvenience...

What can you tell us about the second season?
C: ‘We know it’s not just bears and lions in the woods. We know there’s more than that – there are demogorgons.’
G: ‘It’s 1984, a year after the events took place. It focuses more on Will himself, rather than everyone else looking for Will. He’s in it a lot more.’
N: ‘It’s cool to be able to be a part of it more. In season two, you learn more about how the Upside Down affected Will and how he’s dealing with it.’

You go through some pretty intense stuff in the series. Do you find watching it scary?
C: ‘It has a creepy vibe, especially the music. I wasn’t scared. I already knew Barb was going to die, so it was just like, “Oh wow, she’s gone.”’
G: ‘Yeah, she’s dead. Stomach ripped out, things crawling out of her face: you’re not coming back from that.’

Okay, forget the Upside Down – what are you afraid of in real life?
C: You know when you go to sleep and there’s a bad dream coming on and you feel like you’re sinking into your bed?’
N: ‘I’ve never had that.’
C: ‘Then you wake up in your dream and it’s dark and you see someone coming to torture you…’
G: ‘Wow, that’s very gruesome.’
N: ‘I’m scared of drowning.’
C: ‘Yeah, under a big heavy person. I once went down a slide with my cousins. I was on the bottom and their butts were all in my face and I really couldn’t breathe.’
G: ‘That’s a terrible way to suffocate. What scares me? You guys probably know more than I do.’
C: ‘Millie.’
G: ‘No, being alone. If there was a zombie apocalypse and I was the only one on the planet that was immune to it, but all the zombies were dead and it was just me – no, no.’

The ’80s stuff made all the adults on set nostalgic, but how did you guys feel about the clothes?
C: ‘I hated the jeans. They were very tight – everything was skinny.’
G: ‘They also gave us ’80s tighty-whities to wear in case we flashed our pants when we were running around. It took me until filming the last few scenes of season two to find out that no one except me was wearing them.’

You guys dress up as the Ghostbusters for Halloween in the second season. What’s been  your best Halloween costume?
C: ‘My Spiderman costume. It had padding so I looked muscular.’
G: ‘It didn’t! It was foamy. It looked like one muscle was down there [points] and one was up there.’
C: ‘It looked beautiful.’
G: ‘I’m going to be Spiderman this year but I’m not going to get an old bulky costume like that, I’m going to get an actual Spiderman costume.’
C: ‘Show off your natural attributes.’
G: ‘Yes, my man boobs.’

How have your lives changed since being on the show?  Have you had any strange  fan requests?
C: ‘“Can you marry me?”’
G: ‘People actually ask me to kiss them and I’m like, “I’d rather not, I don’t know you.”’
C: ‘Me and Noah had someone ask us to kiss them on the cheek at the [Golden] Globes.’
G: ‘I wouldn’t have done that.’
N: ‘What about on the lips?’
G: ‘That’s a no.’

Is it fun going to awards shows and  celebrity parties?
G: ‘Yeah, but we’re not big on the glamour… We’re kids.’
C: ‘I like meeting celebrities that inspire me and  I can fan out over.’
G: ‘My idea of a party is going to [the amusement park] Six Flags. I don’t know about talking to business associates while clutching a non-alcoholic beverage. That doesn’t sound like my idea of a grand old time.’

Okay, when you put it like that it doesn’t sound very glam. Do you guys spend a lot of time together?
C: ‘When we’re filming we’re forced to... No, I’m joking. It’s fun being on set with each other. We’re very close.’
G: ‘We live far away from each other, but we have a group Whatsapp chat. Usually Millie just sends memes of dogs.’

Have you had any embarrassing moments on set?
C: ‘I remember… farting.’
G: ‘Yeah, that was the best thing on the planet. So, we’re on set. Millie and Matthew Modine were doing a scene out in the hallway. Caleb and I are reading our books and hanging out. The scene’s going on. Everyone’s very quiet. All of a sudden I just hear “Buuuuuur”. We were dying but we couldn’t laugh out loud because they were doing a really dramatic scene in there.’
C: ‘Remember that time you peed on yourself?’
G: ‘He’s just making it up!’
N: ‘I’ve peed on myself before.’
C: ‘Of course, everyone has.’

Tell us your best joke?
C: ‘When I tell jokes it’s never planned.’
G: ‘It’s never like, “I’ve got a joke for you guys.”  If you’re expecting to laugh, you’re not going  to laugh.’
N: ‘Why was seven hungry? Because seven  ate nine.’
G: ‘That’s the dumbest joke I’ve ever heard.’
C: ‘It’s “Why was seven full? Because seven ate nine.”’
G: ‘Did you hear about the guy who got his whole left side cut off? He’s all right now.’
N: ‘Why did the square go to the beach? Because he likes water and he enjoys the sun.’ 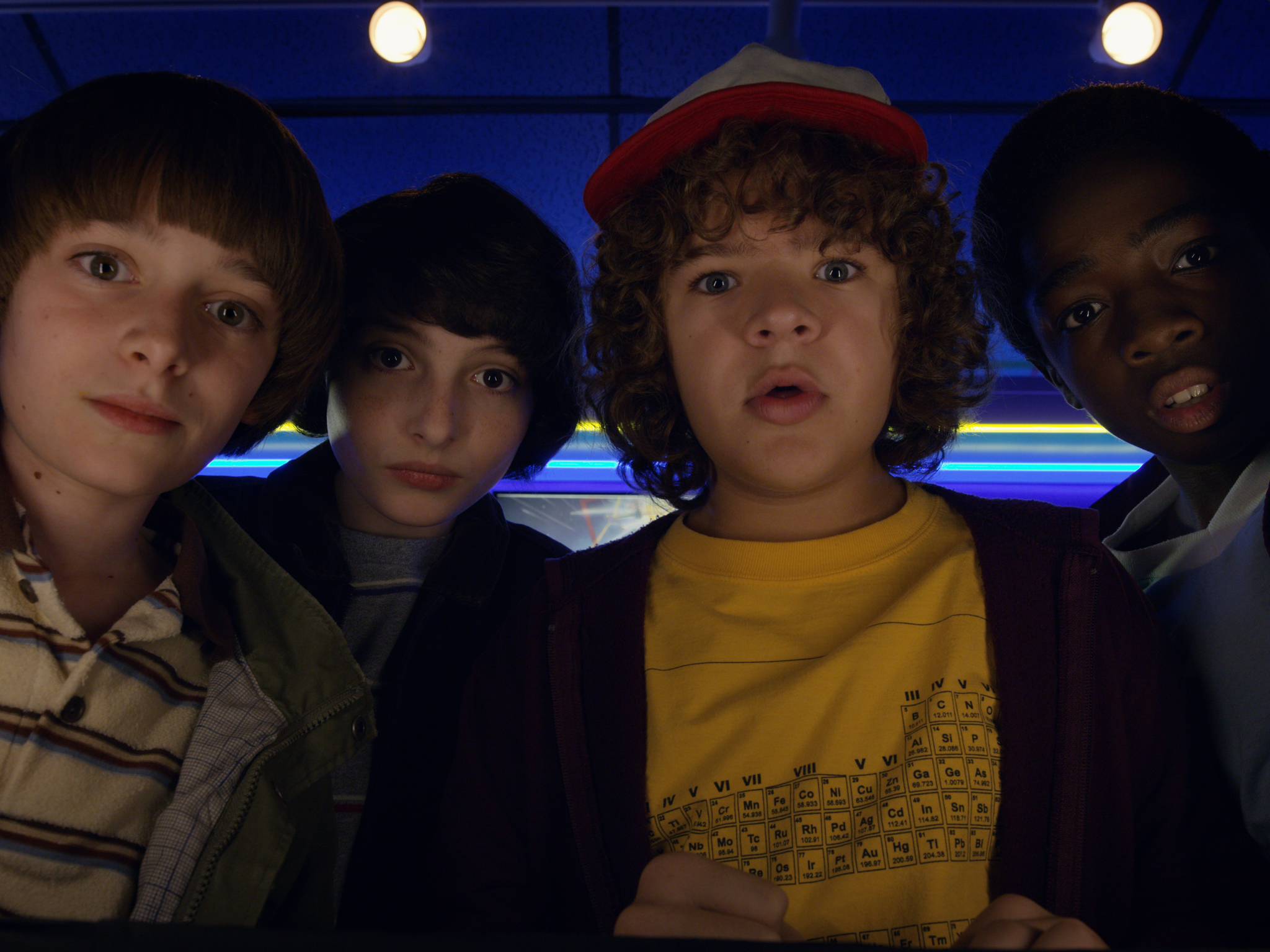 Have you got much in common with your characters?
C: ‘I’d react the same way as Lucas: I don’t think I’d stop and look if I found a person in the woods, I would run. But I’m not as sceptical. Once Lucas finds out that Eleven has powers, he’s still angry. I’d have been like, “Oh, I’m so sorry, are you okay? You need anything?”’
G: ‘When we first started out I was pretty much identical to my character – always being a goofball, dancing and singing. Now I’m developing a more sarcastic sense of humour.’

You sneak out late at night a lot in the show. What’s the most trouble you’ve ever been in?
N: ‘The police came to my house one time. I was playing hide and seek. My mom said to come out, but I never did. She thought I’d been kidnapped or run away, so she called the cops. I was laughing hysterically when the police found me. They got pretty mad.’

Has ‘Stranger Things’ made you scared of stuff like hanging out  in the woods?
C: ‘I’m not scared to go into the woods. I like to climb trees.’
G: ‘You like to climb trees? Me too, bro. We can climb a tree together.’
N: ‘Maybe monsters? But I know they’re not real’.
G: ‘Or do you?’

‘Stranger Things 2’ is on Netflix now. 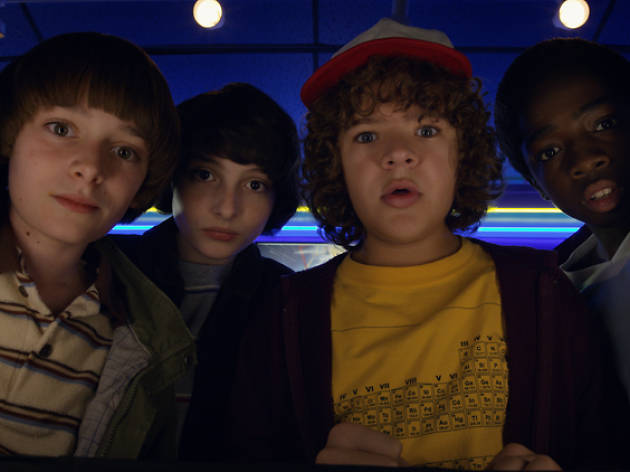 We caught up with ‘Stranger Things’ star Finn Wolfhard about superfans, ’80s clothing and what to expect from season 2.