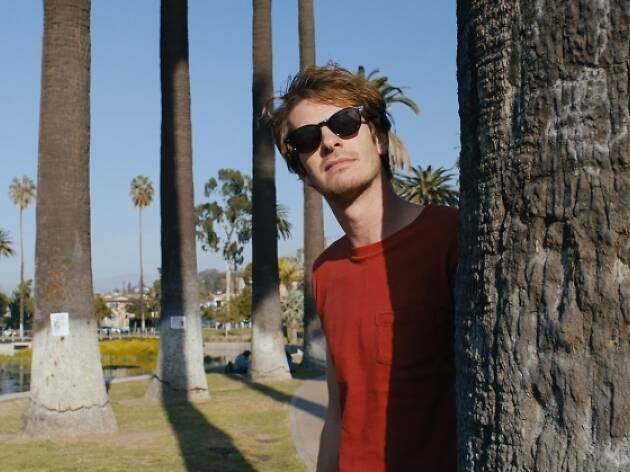 The fog is thick in ’Under the Silver Lake’ – not the funk of pot smoke (though there is some of that) nor of bad weather. Rather, it’s the profound confusion located somewhere behind Andrew Garfield’s brow: His unkempt character, Sam, prowls the streets like a Scooby-less Shaggy in search of answers to a riddle he only half comprehends. Hypnotic, spiraling and deliriously high on its own supply of amateur-sleuth movie references, writer-director David Robert Mitchell’s deeply personal follow-up to his relentless meta-horror film ‘It Follows’ vaults him into ‘Big Lebowski’ territory, by way of several Lynchian side streets. It’s the kind of raggedy-ass thriller that only gets made when a young filmmaker, emboldened by success, moves past virtues of concision, hoping to summon the full, meandering spell of a paranoid dream. Don’t hold it against him.

We’re in Los Angeles, because of course we are. The secret-history-of-L.A. movie has a long and glorious history, burrowing under the city’s sunny haze to an underlying meanness. ‘Under the Silver Lake’ plays like ‘Chinatown’ for millennials, but let’s not get ahead of ourselves. Sam’s just a sleepy guy on line at the coffee shop, the laid-back Cali-pop perfection of the Association’s ‘Never My Love’ completing his morning mood. Someone is scrubbing away a piece of graffiti on the storefront window (‘BEWARE THE DOG KILLER?’) but Sam, jobless, has more pressing concerns. There’s a frequently topless neighbor to spy on from across the courtyard – Sam’s a bit of a perv – and then his eye turns to Sarah (Riley Keough), a Hitchcock blonde in a white floppy hat who takes up residence by the pool. Shouldn’t a guy with so many noir posters know to avoid these women?

Driven by Sarah’s sudden disappearance, his own raging hormones and the fuck-it-all idleness that comes with a five-day eviction notice, Sam begins tugging on the thread—and this is where ‘Under the Silver Lake’ becomes the stealth comedy it really is. Rich Vreeland’s voluptuous orchestra score goes full ‘Vertigo’, brewing a menace that Mitchell consistently undercuts with banal, dopey details: Who is the mysterious pirate in blue jeans running across a lawn? What exactly happened to deceased ‘billionaire daredevil’ Jefferson Sevence? (Fans of subversive novelist Thomas Pynchon, your kindred spirit has arrived.) Why does a meeting with an intense zine maker (the expertly alienating Patrick Fischler) end in a bloody mess? And most worrisome: Doesn’t Sam have a change of clothes that aren’t pajamas?

The locations – from a dusty hike up to ‘Rebel Without a Cause’s Griffith Observatory to hipster gatherings on rooftops and at cemeteries – reveal Mitchell for the smitten transplant he must be. But give his film time. He’s snaking around to a deeper comment on generational idleness, the kind that looks for hidden messages in video games and cereal-box maps. ‘We crave mystery because there’s none left,’ one of Sam’s dopey friends mumbles, a line given urgency by our hero’s OCD-plunge into scribbling lyrics on empty pizza boxes, parsing them for mathematical code.

Some viewers will find flaws: A bitter monologue about the homeless is harsh and unnecessary, and occasionally Sam gets Mike Hammer-violent. And the cynical ending is worse than a tombstone: Can a film that attempts to indict everything from phony rock rebellion to the elitist schemes of the ultra-rich (and ultimately the audience itself) ever end satisfactorily? Still, the ambition of ‘Under the Silver Lake’ is worth cherishing. It will either evaporate into nothingness or cohere into something you’ll want to hug for being so wonderfully weird.