The face of Manchester is constantly shifting, as street artists use its historic buildings as canvases and its people as inspiration. Here are the pieces worth seeking out.

What is it? A huge mural celebrating the writer of A Clockwork Orange. It’s accompanied by a Burgess quote: “We can destroy what we have written, but we cannot unwrite it.” The portrait was painted in 2016 under the banner of the Cities of Hope project, in which artists were asked to create work that was iconically Mancunian.

Who did it? Polish street artist Tankpetrol. Although best known for his work with stencils, he painted this piece freehand, using a photo by Ulf Andersen as reference.

What is it? A tribute to Manchester resident Lydia – daughter of a Windrush victim – and her son Ezra on the People’s History Museum. Throughout 2019, the museum is running activities related to protest movements to commemorate the Peterloo Massacre’s bicentenary.

Who did it? Axel Void, a Haitian-Spanish artist who was born in Miami but raised in Spain. He’s renowned for dark, intense murals that address social issues.

What is it? A large mural on a wall in the Northern Quarter, featuring a honey heart being swarmed over by 22 worker bees, each one representing a victim of the Manchester Arena bombing in 2017. The tribute was commissioned by the Manchester Evening News.

Who did it? Russell Meehan, aka Qubek, who has been working on murals for the last eight years.

What is it? A large painting of The Fall’s late lead singer on the side wall of a fish and chip shop in his Prestwich neighbourhood, accompanied by a quote from an interview with The Guardian in 2011: “Fear is something I try not to absorb.” Smith was the only constant in a band that saw 66 musicians come and go. He died last year, aged 60.

Who did it? Akse P19 – the man behind the Northern Quarter murals of Tony Wilson and David Bowie (now painted over) – as part of the Prestwich Arts Festival.

What is it? A painting of the laconic, arch Anthony H Wilson – ‘Mr Manchester’ – who died in 2007. Wilson was a TV and radio presenter, and co-founder of both Factory Records and the Haçienda nightclub.

Who did it? Akse P19 again. He’s a French artist of Vietnamese origin who has been based in Hulme since 1997. Akse started painting in 1992 and focuses on freehand photo-realistic graffiti portraits.

What is it? A tribute to one of the country’s most celebrated mathematicians, a key figure in the breaking of Germany’s enigma code during the Second World War, who worked at Manchester University and died in Wilmslow. His work led to a breakthrough that arguably shortened the war and saved many lives, but he wasn’t recognised due to his homosexuality, which was then a crime in the UK. He was posthumously pardoned in 2013.

Who did it? Tankpetrol again, courtesy of M20 Property Company, who donated the use of a former public convenience right next to Southern Cemetery for works by Manc artists that celebrate the city.

Who did it? Aylo (Hayley Garner) and Cbloxx (Joy Gilleard), who have since joined forces to become Nomad Clan. It was commissioned by local community fundraisers Queerchester.

What is it? A tribute to the historic meeting between Charles Rolls and Henry Royce in the Midland Hotel in 1904, which led to the launch of one of the most recognised brands in the world. The painting shows the car slowly being reclaimed by nature and includes references to Ernest Rutherford’s work on the atom as well the city’s musical heritage.

Who did it? Nomad Clan, in conjunction with The Matthew Ludlam Foundation, added this painting in homage to the spirit and fortitude of the city after the bombing.

Got more art in you? 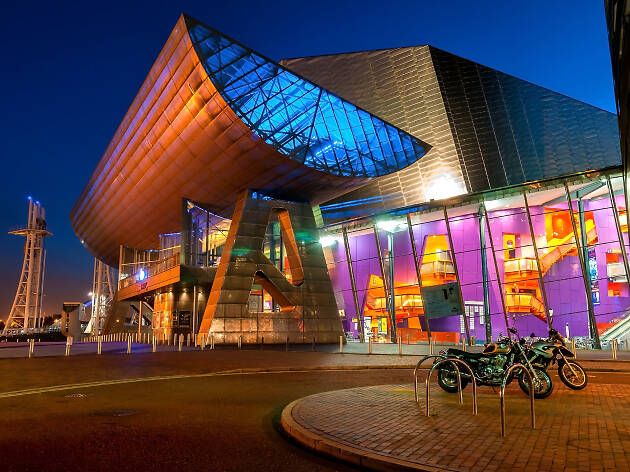 On the one hand, you’ll be amused by the multi-million-pound venues that draw world premiers from globally admired artists. On the other hand, you’ll find yourself fascinated by the more grassroots, DIY art scene fueled by up-and-coming artists (Rob Bailey! Mariel Osborn! Caroline Dowsett!) who operate out of renovated red-brick mills and hidden studios that occasionally open up treasure chests to the public, letting them peek inside the cutting edge work that makes the city a top-rated artist destination.