Why Manchester is the greatest city in the UK, by mayor Andy Burnham

The city came third in our annual ranking of the world’s greatest urban hubs. Here’s why the Mancunian mayor loves it 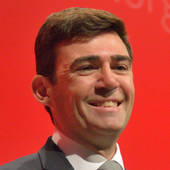 Andy Burnham is a big fan of Manchester. As the mayor of the city and its surrounding region, he couldn’t not be. But he was still chuffed to hear it had come third in our annual ranking of the world’s greatest cities – and first in the UK. In his own words, here’s why it’s so great.

On Manchester’s sense of community

‘This place always comes together when times are hard. And it’s done that again. From my point of view – because we’ve obviously had some differences of opinion with the government through the pandemic – I can’t tell you what it means when I raise my voice and I look behind me and people are just there. The place comes together and it’s hard to put it into words how much it means: there’s just a sense of right and wrong here.’

‘If you look back at Manchester’s history, this has always been the case. I made the point in the middle of Black Lives Matter, in summer last year. Obviously, that was a really difficult moment – difficult in that people here were outraged. But the commitment to a truly diverse city goes back a long way. I’d reference the fact that the mill workers in the nineteenth century stood together when there was the cotton blockade in the American Civil War. Even when the loss of cotton was putting the mills dark and everyone was struggling for their jobs, the workers here voted that they would not handle slave-picked cotton. People here were saying Black Lives Matter 160 years ago.’

On the difficulty of the past year

‘There was a moment last year where we had really a tough time: we were under restrictions and you may remember I was in a public disagreement with the government about the lack of support. When we were in Tier 2, as it was called, from the summer, there was nothing. But the minute London went into Tier 2, there was support. So I was making the point to the government that people were really, really struggling. I said we’re going to have to launch our own #oneGM funding appeal to carry the place through. It was just humbling to see what started to come in from individuals, businesses – incredible, actually.’

On supporting the homeless

‘The same is true of homelessness in the early part of the lockdown. We did bring in everyone very quickly, even before the government were doing it. There were huge amounts of donations and support and I remember contrasting images of people sleeping in car parks in Las Vegas – do you remember that image? – whereas here everyone got a room. It was a massive effort, especially to give them toiletries and basics to support them while they were in that accommodation. Everyone got behind it. We were really lucky.’

‘Just on the eve of lockdown, I saw the Courteeners at the Albert Hall and it kind of lived on in my mind all last year, because we were deprived of that. I find the Albert Hall a special venue. It’s a wonderfully atmospheric place to watch a gig. But also, we nearly lost some of our venues last year: the Deaf Institute, which is a really historic small venue and is much loved, and Gorilla, which is a more modern venue but is also much loved. We rallied around to support them and we did save them.’

‘We’ve got two or three really big ones: we’ve got Band on the Wall reopening and a new arts venues called Factory being built which will open next year or the one after. We’ve also got the largest indoor arena in Europe under construction at the moment. It’s going to be called Co-op Live and will be right by the Manchester City ground. That will enable us to host events and concerts that we might struggle to at the moment. A number of our theatres have been refurbished. We invest in culture, and we are proud to make a big commitment to our cultural institutions.’

On his Friday night plans

‘Here’s one for the oldies. I’m afraid I was in my teenage years during the 1980s and 1990s, and I was immersed in the Manchester music scene in that era. We’ve got New Order at Heaton Park this Friday. Honestly, I can’t wait. I’ve been counting down the days to this for about a year. I loved New Order more as I’ve got older. Obviously some people still listen to Stone Roses, the Smiths, the Happy Mondays, but actually, Joy Division and New Order are the ones who have probably stood the test of time. Some of the other music is a bit trapped in its era, whereas theirs is not. And I think you’ll see young and old united at Heaton Park on Friday night, and it’ll be a massive Mancunian coming-together.’