The project “Revolucionarte” joins the words revolución, evolución and arte. It deals with a concept created by the team Monumento a la Revolución (MRM) in order to maintain the livelihood of the space. The goal is that people will be surprised upon each of their visits: a new exposition, a concert or an art exhibition at any given time.

The first activity of the program was the opening of the Paseo Cimentación gallery, with a Gottfried Helnwein exhibit. “It’s a way of learning about the background of MRM, a steel structure – kind of like the Eiffel Tower – that is located one level below the vestibule, and on the other side, there’s an intriguing underground maze where they host video, audio and photo exhibitions, that are often contemporary, or very specific or that unite the different art installations that we may have in the space between the dome and the four pillars, which allows artists to make grand format installations,” explains Eva López-Sánchez, director of promotion and culture at MRM.

On December 15th, they inaugurated the first part of the galleries from within the Eiffel structure: the Galería Estructura 1910, which has three floors, small auditoriums and spaces where they have interactive installations that tell about the monument’s history.

At its highest point – 65 meters – is the lantern, “which is being worked on so that people can visit it. They will go up in the original elevator from 1938, that rises on an incline, between the monument’s two copper domes.”

With the idea of having a good relationship with its neighbors, the Adelita café offers products from the Tabacalera neighborhood, featuring traditional Mexican cuisine. “We want to create a cultural corridor that goes from the Museo de San Carlos to the MRM, which includes cafés, restaurants, ad stores that sell things like guayaberas and vinyl records, and we want to have one day dedicated to Colonia Tabacalera in which merchants from the neighborhood can learn a bit about each others’ businesses. We want to achieve something similar to what’s been done in the Plaza de la República.” 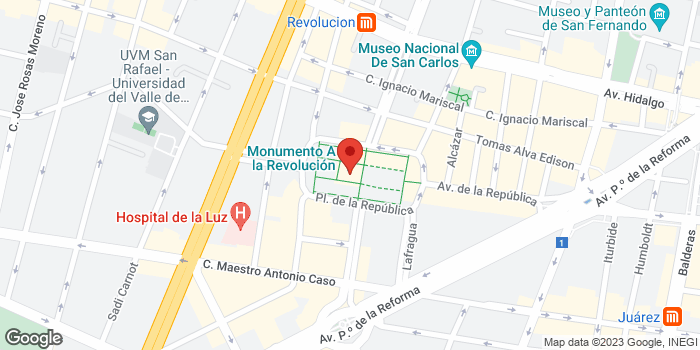