Art had ceased to be called modern in the last century and the city lacked a space dedicated exclusively to house the latest artistic endeavors, those that the younger generations were developing which now, for lack of a better name, is called contemporary art.

It was at that point that emerged one of the most functional and beautiful museums in the city. Inaugurated in November 2008 and with an impressive design by Teodoro González de León, this is a multimodal space that also allows for the exhibition of retrospective work, which is a space of installations designed specifically for this building.

Backed by the National Autonomous University of Mexico and located among the volcanic rock of its cultural center, the museum complements the fascinating creative offering that this campus has given to our city with concert halls (Sala Nezahualcóyotl and Sala Carlos Chávez), Dance halls (Sala Miguel Covarrubias), theaters (Sor Juana Inés de la Cruz forum, Teatro Juan Ruiz de Alarcón), Film (Julio Bracho and José Revueltas rooms), a cafeteria that has won prizes for its exquisite gastronomy (Azul y Oro) and a hallucinating sculpture space that extends into the El Pedegral ecological reserve.

One of the museum’s most interesting offerings is the Experimental Sound Space: a dark room where sound works of all types are created. It’s worth getting informed about the temporary exhibits in that they are truly interesting.

The museum has an excellent offering of workshops and seminars, as well as music and concert cycles. The gift store is full of random fun as well as sophisticated gifts: from art books to designer objects, to the sort of style that every post-modern or contemporary home should strive to achieve. 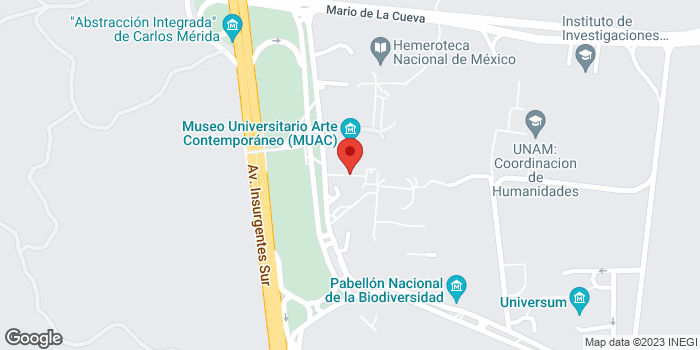