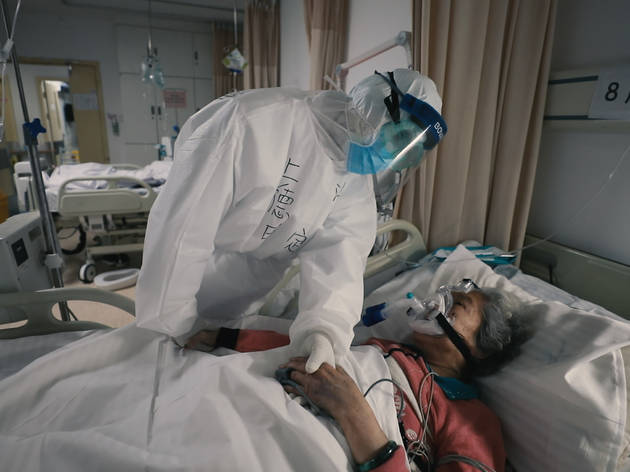 A harrowing, access-all-areas journey into the heart of pandemic-stricken Wuhan

It’s often said that cinema lets you travel the world vicariously – but no one’s bucket list ever included the Chinese city of Wuhan from January to April 2020. That’s the period covered by this harrowing co-authored documentary, which gives us extraordinary access to four hospitals operating in the sprawling Hubei capital at the epicentre of what became the global Covid-19 pandemic. One of the three credited directors, Hao Wu, worked remotely (fittingly) from the USA; the other two, Weixi Chen and another who remains anonymous, were in Wuhan itself, gathering footage like frontline reporters. Their resulting in-at-the-deep-end film has a disturbing, breathless urgency to it. Offering no voiceover and little context, it thrusts us into the chaos of the daily work of doctors, nurses and other frontline workers all doing their best to cope with an unprecedented health crisis.

76 Days dives straight into a harrowing scene of death, grief and trauma: a medical professional, dressed head to toe (like almost everyone else in the film) in otherworldly PPE gear, is wailing as his father’s dead body is being carried out of a hospital ward and into a waiting mortuary van. His colleagues calm him down, showing both care and a firm hand. From there, prepare for wooziness and discomfort to be the norm.

Also, don’t expect much in the way of explanation, either on a micro or macro level. You’ll struggle to identify who’s who beneath the protective clobber, and you’ll also wonder at points what time, day or month it even is. Like hospital workers on neverending shifts, we only occasionally stray from hospital grounds, for street shots of spookily empty roads or drone images from above the city. You have to presume that all this confusion is the point: several people in the film talk of the crisis in terms of warfare – and war does strange things to the brain, pulling the rug out from under such niceties as clarity and calm.

Considering that it took until early 2021 for the World Health Organisation to penetrate Wuhan, the main achievement for which these filmmakers must be applauded is simply getting the story out and giving us a clearer view, however brief and in-the-moment, of a city about which most of us know almost nothing. This is primary evidence right from the source of history. It’s uncompromising. It’s disturbing. But it’s also deeply human, allowing for many glimpses of human kindness and human frailty beyond a wall of anonymity and pain.

Director:
Weixi Chen, Hao Wu
You may also like
Popular movies
We know this city. Do you?