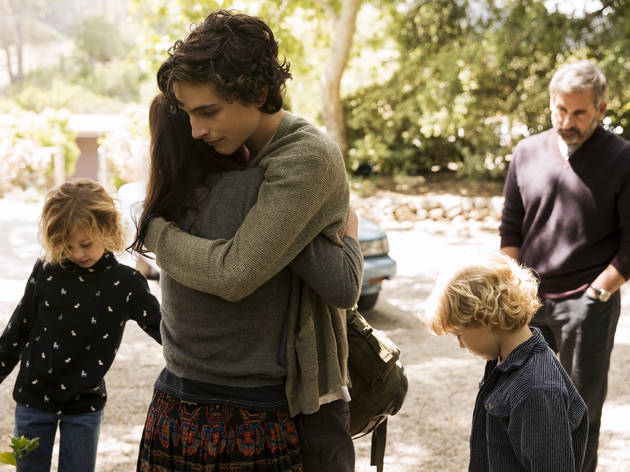 Timothée Chalamet, all of 22 years old and indelible as two radically different kind of boyfriends in last year’s ‘Call Me by Your Name’ and ‘Lady Bird’, is doing major things in his new movie, ‘Beautiful Boy’ – things that no other actor of his generation is attempting. You have to go back to Marlon Brando to see these kind of heartbreaking frowns, the angelic face turned upward, wrestling with frustration. Chalamet is playing a college-bound kid derailed by drugs: meth, pills, everything. What he’s pulling off in a diner with Steve Carell (as the panicky out-of-his-depths dad) – a combination of cajoling, breaking down, acting fake-tough – is incredibly tricky. Even subtler are Chalamet’s wordless moments: a slack-jawed, Christian Bale-like zombie walk through a campus quad; a sober drive up the sunny California coast, Neil Young’s ‘Heart of Gold’ on the stereo, the dissatisfaction slowly creeping in.

How much easier it would be to focus on Chalamet, doing the most overwhelming work of his young career, and not the earnest, seesawing movie around him. ‘Beautiful Boy’ is perfectly fine: unflinching where it needs to be, keenly attuned to the cyclical nature of relapsing along with the deeper blows to pride, trust and identity. It sometimes feels strenuous in making its points, but you’ll be too wrecked to call that a flaw. The script, loaded with sharp details, comes from the dual father-son memoirs of David and Nic Sheff; director Felix Van Groeningen gets out of the way of his performances and uncovers a rawness that elevates this above a telly drama. Parents will feel heard by this movie in a way that few other films have tried. Everyone else should go for Chalamet, who’s a rocket taking off. You want to be able to say you were there when it happened.