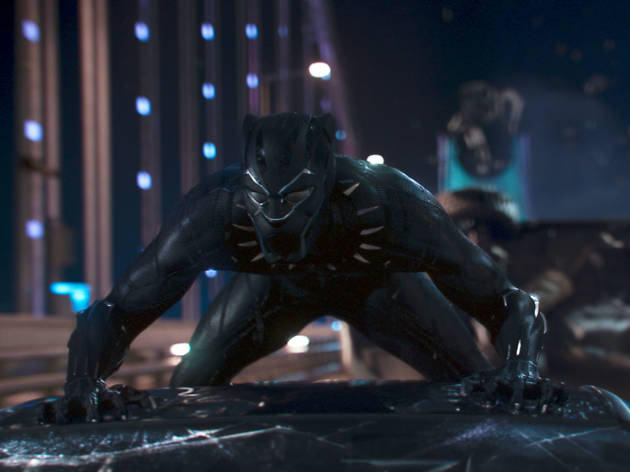 Surprising at every turn, Marvel’s new spinoff throws shade at the white-bread business of blockbustering.

For all their global dominance, everybody wants these superhero movies to be better: funnier, smarter, more inclusive, more super. A huge step in the right direction, ‘Black Panther’ is that dream come true. Proudly African – even if its Africa comes in the form of the fictional country of Wakanda, a powerhouse of secret technologies – Marvel’s latest is, from top to bottom, a conscious reversal of racial paradigms. Handsomely mounted by ‘Creed’ director Ryan Coogler and starring an enviable slate of black actors that makes cameoing comics godhead Stan Lee almost seem lost, the film is provocative and satisfying in ways that are long overdue, like its ornate, culturally dense production design and the deeper subtexts of honor, compassion and destiny.

Wakanda’s young king, T’Challa (a dignified Chadwick Boseman, well-seasoned after playing onscreen versions of James Brown, Jackie Robinson and Thurgood Marshall), recognizes that the world outside his peaceful realm is a divisive place. Still, even as his own armor-clad excursions as Black Panther set up an internal tension between isolationism and responsibility (yes, this is the rare blockbuster with something on its mind), tensions within Wakanda—fomented by exile-turned-rebel Erik Killmonger (Michael B. Jordan, on fire)—threaten to bring him down. In their script, Coogler and Joe Robert Cole take inspiration from the Black Panther’s 50-year history on the page, including a dazzling current run by author Ta-Nehisi Coates, and the film plays like an alternative ‘Macbeth’, with characters riven by ambition, righteousness and the hum of supernatural forces.

Black Panther comes loaded with pleasures big and small, such as ‘The Walking Dead’’s fierce Danai Gurira (made even more arresting without her trademark locks) charging into hand-to-hand combat and a regal Angela Bassett lending grandeur to her every conflicted pause. For all the movie gets right, it stumbles on the battlefield, tripped up by Marvel’s typical bloodless chaos, though the deliriously funny sight of rampaging war-rhinos goes a long way toward earning our forgiveness. The scale and ambition here is huge: Coogler isn’t quite a builder of epic action sequences, but he’ll get there. Yet you’ll thrill to the plot’s consistent movement toward something internal, a metaphorical sense of purpose in a spandex universe not known for being risky. Let the studios take notice. We come to the multiplex to dream, but that doesn’t require that we check our brains – or real-world tensions – at the door. A stealthy detonation at the heart of popular entertainment, ‘Black Panther’ feels like the future.