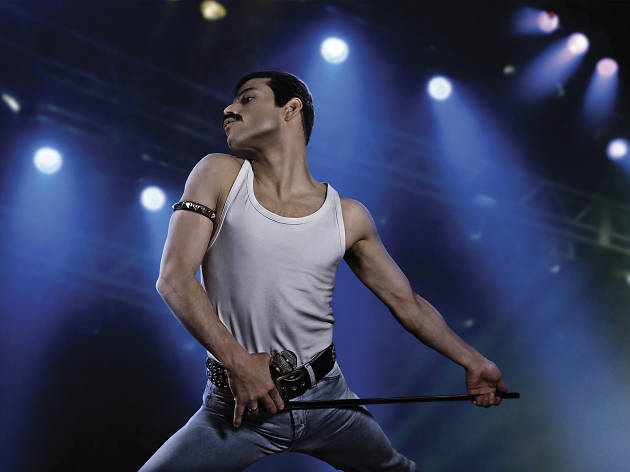 This tune-filled but tame Queen biopic may well rock you but it’s unlikely to shock you.

The afterlife has rarely been quiet for Queen frontman Freddie Mercury, who died young in 1991 after a flurry of late-life creativity. First came ‘Wayne’s World’, with Mike Myers head-banging along to Queen’s 1975 hit ‘Bohemian Rhapsody’. Then came a massive tribute concert in 1992 and a globetrotting stage musical, ‘We Will Rock You’ in the 2000s. Now, 27 years on, comes the authorised movie biopic to push the Freddie Mercury legend even further into the realm of the unreal.

‘Bohemian Rhapsody’ is as brash, loud and mask-wearing as Mercury at his most playful. Another movie would try to get behind the legend or play with the idea of it but this does neither. Instead, it grabs the legend by the neck and gallops recklessly through the movie on it, climaxing in a wholesale extended recreation of one of the most famous rock gigs of all time: Queen at Live Aid. Modest and inquiring it is not.

It boasts a film-stealing, possessed performance by Rami Malek, who pouts, struts and quips as Mercury, turning the rest of the cast into bit-part players. The energy of Malek’s imitation helps to bind what amounts to a series of gossipy but harmless rock-world anecdotes into something vaguely coherent. The story starts and ends with Queen playing Live Aid at Wembley in July 1985. In between, we see how Farrokh Bulsara, born in Zanzibar, became Freddie Mercury and helped to transform a student band into a stadium rock behemoth.

The movie, though catchy and often seductive, is an act of brazen myth-making. Facts and chronology are tossed aside in favour of a messianic storyline that sees their 20-minute Live Aid performance serve as Mercury’s death, resurrection and ascension. Much is left out, or fiddled with. It’s unlikely that Mercury knew he was HIV+ in 1985, but here he reveals it to the band while rehearsing for Wembley. That’s a major leap of imagination for the sake of a neat and inspiring movie moment: Guitarist Brian May said in 1991 that the band were only told of his illness “a few months” before Mercury’s death (then later said they knew during the 1990 recording of final album ‘Innuendo’, a full two years earlier). The film also suggests that Queen hesitated before agreeing to Live Aid; it neglects to add that their hesitation probably stemmed from how they had just broken a UN boycott by playing a series of gigs at Sun City, the whites-only playground in apartheid South Africa.

The film is part-produced by Queen’s longtime manager Jim Beach and two of Mercury’s bandmates, Brian May and Roger Taylor. Which is another way of saying: don’t expect anything more than a safe gloss over the Queen tale. It leans into Mercury’s experience, telling of his relationship with his parents, his early ‘marriage’ and his coming out as gay. But the film’s perspective feels outside-looking-in on Mercury’s world: its attitude toward sex and drugs is coy and uncomfortably close to the small-world thinking it claims to dismiss.

Luckily, the music wins out over all the myth-making and, which is surely what the band prefers: a lively, uncomplicated jukebox movie. This is a feature-length earworm that leaves ‘Don’t Stop Me Now’, ‘We Are the Champions’ and the rest wriggling in your cochlea and helping to drown out any inner whisper suggesting that you’ve just had the wool pulled magnificently over your eyes by these masters of rock theatrics.