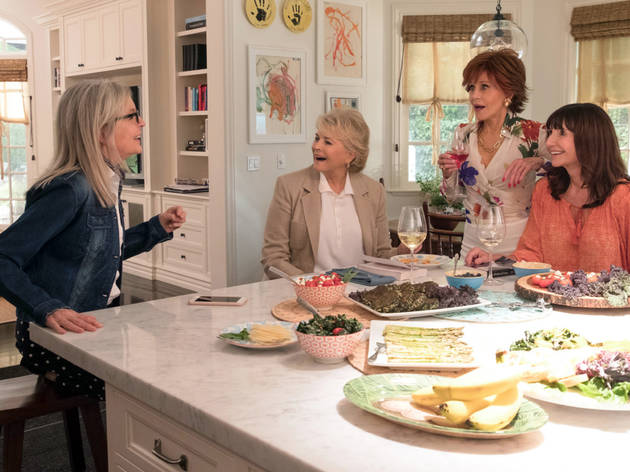 Four comedy vets pep up the slightly tired adventures that come with a flirtation with the hot-and-bothered novels of E L James.

The wine-mom film of the year, ‘Book Club’ is a somewhat cheesy but occasionally charming portrait of women of a certain age. Starring Diane Keaton, Mary Steenburgen, Candice Bergen and Jane Fonda as a group of longtime friends who spice things up by reading the ‘Fifty Shades’ trilogy, it definitely scratches an itch: With Hollywood constantly pandering to the interests of teenage boys, it’s nice to see something targeted to a demographic that’s often overlooked (even if it’s still kind of pandering). The plot machinations are predictable, with the ladies taking risks, assessing their relationships and forming new ones, whether that’s through online dating or a meet-cute with a wealthy pilot (a mischievous Andy Garcia).

There’s not a lot of conflict here, which is part of the point. ‘Book Club’ is a piece of Nancy Meyers-esque escapism, in which musing about romantic frustration is only a bottle of pinot and a picturesque view away from being neatly resolved. Given the title and premise, there’s surprisingly little book-clubbing on display. And since the final ‘Fifty Shades’ novel came out years ago, there’s a definite vibe that the movie is arriving past its sell-by date.

At the end of the day, ‘Book Club’ is a showcase for its quartet of charismatic actors. Fonda wins laughs with her sassy, sexually frank role (with shiny, form-fitting outfits to match) and Keaton delivers a likable riff on her typically awkward, androgynously-dressed self (a scene in which her friends chide her for her too-covered-up date outfit gets knowing chuckles from those aware of her red-carpet looks). There are funny lines scattered throughout, including a particularly inspired innuendo comparing a neglected vagina to a Werner Herzog film. It all adds up to a pleasant diversion, but you might wish this cinematic bonbon offered something closer to a meal.