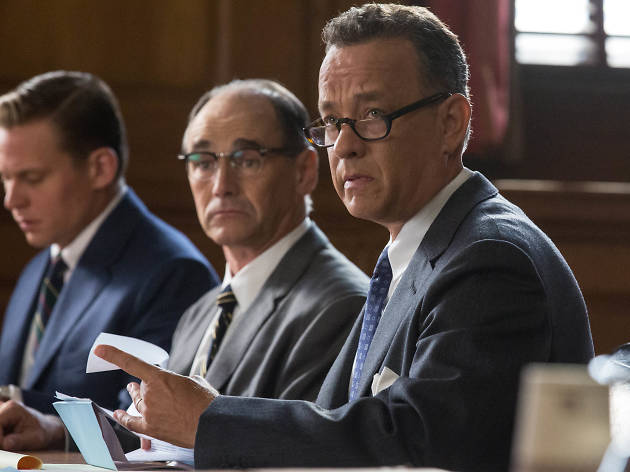 Acts of politeness small and large mark Steven Spielberg's latest film, a deeply satisfying Cold War spy thriller that feels more subdued than usual for the director – even more so than 2012's thoughtful 'Lincoln' – but one that shapes up expertly into a John Le Carré-style nail-biter.

In a knockout and near-wordless intro, a long-faced canvas painter (Mark Rylance, magnetic) finishes an oil in his 1957 Brooklyn apartment, makes his way to the park, picks up a secret coin under a bench containing a tiny folded document, and eventually gets picked up by the Feds on his tail. He's Rudolf Abel, the real-life Soviet spy who is then charged with espionage. But the decent, often feisty man at the film's centre is James Donovan (Tom Hanks), the lawyer who, at great risk to his family, defended Abel's life as a matter of due process and integrity.

One could be forgiven for finding this early stretch a little like a Kevin Costner movie: apart from cinematographer Janusz Kaminski's blooming windows, it doesn't quite feel like a Spielberg film until a burning American spy plane plunges past its parachuting pilot, Francis Gary Powers (Austin Stowell). He's about to become a Russian prisoner and a pawn in a secret trade that the government hopes Donovan will broker in a wintry Berlin split by the Wall: the plan is to swap Abel for Powers.

The verbal gamesmanship brings on a new, energised movie, beginning with Hanks's charming Donovan, slightly amused in his Irish crankiness, even as his fancy overcoat is stolen by German teens ('You know – spy stuff' is his explanation for the missing garment). Hanks has never seemed more like a modern Jimmy Stewart, drink in hand, just looking to get home to his bed, as the script leans into its cavalcade of slightly bizarre negotiations with Eastern European thugs. (The signature of the Coen brothers, who did rewrites, is hard to miss.) Yes, 'Bridge of Spies' does end up on a bridge of spies, but you can forgive it its more literal moments: reaching its humane climax of coolheaded diplomacy is Spielberg's most wily and adult journey since 'Catch Me If You Can'.