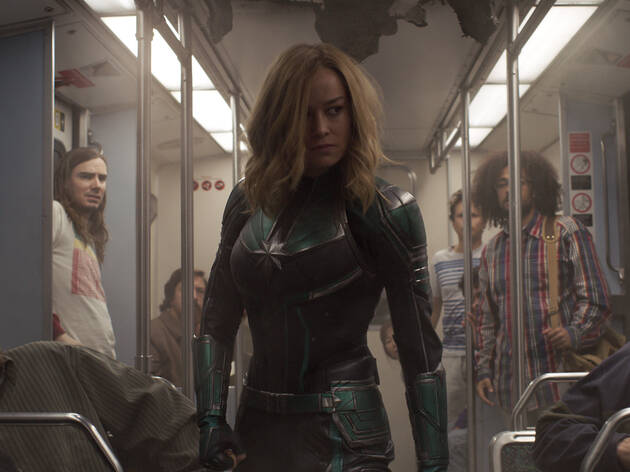 Superheroes save the world on a regular basis, but their movies aren’t nearly as courageous: For every ingenious ‘Black Panther’ that departs from the billion-dollar formula, you get ten timid time-wasters. ‘Captain Marvel’, the Marvel Cinematic Universe’s first female-led instalment, means a lot symbolically—especially to young girls who resonate with Gal Gadot’s confident portrayal of Wonder Woman. But you can’t help but wish the watershed moment arrived with a more richly imagined central character. Even within the MCU itself, you can locate fiercer, more complex women (Elizabeth Olsen’s tortured Scarlet Witch comes to mind), and while ‘Room’ and ‘Short Term’ 12 star Brie Larson is certainly capable of expressing wire-taut uncertainty, she’s a bit stranded in the rubber suit, playing a role that gives her scant opportunity to be human. It seems beneath her.

That disconnect is too bad since ‘Captain Marvel’, co-scripted by ‘Mississippi Grind’ directors Anna Boden and Ryan Fleck (plus an army of story writers), tries hard to floor you with its freshness. Sometimes that effort is too obvious, as it is with the film’s utterly unnecessary first 20 minutes: a spew of Trekkian world-building that introduces planet Hala, the Kree, the Supreme Intelligence, the evil Skrull (maybe take notes) and, only slightly less mystifying, Jude Law as a martial-arts master. Eventually our hero (Larson), an alien supersoldier, plunges through the roof of a Blockbuster Video into a very James Cameron–like 1995 – they even get the mote-filled L.A. haze just right – where S.H.I.E.L.D. agent Nick Fury (a digitally de-aged Samuel L. Jackson, astounding in every shot) pulls up in his boxy car, reporting for quip duty. Later, a cat called Goose sashays into the action wreaking havoc; ‘Captain Marvel’ often shares the visual surreality of the ‘Guardians of the Galaxy’ movies.

But don’t play in Cameron’s ‘T2’ fish-out-of-water universe if you’re not packing a Furlong or a sense of humor. Scenes between Fury and Larson’s Carol Danvers, rediscovering her human past, are oddly inert, and the film’s much-vaunted feminism, promised in months of run-up advertising and interviews, gets short-shrift. (Never has so much been asked of No Doubt’s “Just a Girl,” squelching its way through a fight scene.) What does it mean that Ben Mendelsohn, always compelling as a villain—here he’s one of the bald, pointy-eared Skrull—ends up delivering the most likeable character, supplying action heroics, snide remarks and even parental devotion? Shouldn’t that have been Larson? Yes, the plot hinges on one of those gleaming power cubes; you already knew that. But ‘Captain Marvel’ was supposed to be, well, marvelous, a chance to present a woman coming into her own destiny just as Tony Stark did in the first Iron Man. In-jokes about the Avengers aren’t firepower enough.