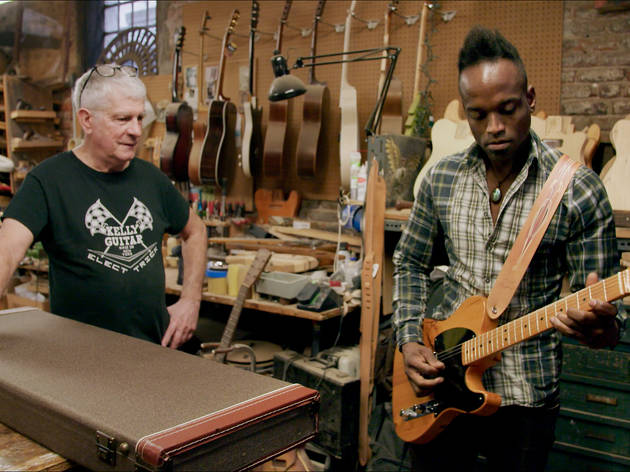 Like a mellow jazz solo, this celebration of artisanal guitar craftsmanship in New York is worth getting lost in

Located in a small shopfront in New York City’s West Village, Carmine Street Guitars is a remnant of the neighbourhood’s bohemian past, when cheap rent and bustling coffeehouses attracted swarms of artists, musicians and poets. Though the shop has only been in its current location since 1990, owner Rick Kelly has been crafting handmade guitars in the Village since the mid-’70s, selling axes to the likes Bob Dylan and Lou Reed. While gentrification overtakes his corner of the city, Kelly soldiers on, quietly making beautiful instruments that keep falling into the hands of famous musicians. It’s a tantalising premise for a documentary.

Devoid of narration, talking heads or slow pans over archival photos, Carmine Street Guitars echoes the subdued intensity of its subject. Director Ron Mann throws the viewer into a typical week inside of the shop. Through hushed scenes that find him hunched over a workbench, Kelly is a consummate craftsman who still works with his grandfather’s tools and doesn’t own a mobile phone. He’s joined by his apprentice, Cindy Hulej, a twentysomething artist with a shock of bleach blonde hair who is learning the ropes while trying to bring the shop into the twenty-first century, tagging Instagram photos of their latest creations with #guitarporn.

The bulk of the doc unfolds across a series of visits from musicians, as jazz guitarist Bill Frisell comes in to show off some surf rock licks, Wilco’s Nels Cline searches for a gift for a bandmate and Kirk Douglas of The Roots gets a look at the weathered wood Kelly uses to create his guitars – all sourced from old buildings throughout the city, or as he puts it: ‘The bones of New York.’ While some of the interactions have a stilted, overtly staged quality, most include at least one undeniably genuine moment: when a player picks up one of Kelly’s instruments and strums a chord.

The shop is depicted as an anomaly on its street, with fancy restaurants and trendy coffee shops closing in on all sides. A sequence in which an estate agent cases the property may reek of artifice, but it’s an apt depiction of the merciless march of gentrification. Stray comments caught on camera make it clear that Kelly is acutely aware of the challenges he faces and the importance of passing on the knowledge he’s gained to Hulej, so she can carry the torch.

Carmine Street Guitars doesn’t get bogged down in the travails of the industry – on the contrary, the doc is a depiction of an artist in the midst of a renaissance. The muted presentation and lack of narrative drive may prevent its niche subject matter from buzzing with energy, but if you get jazzed about an appearance from experimental guitarist Marc Ribot or by seeing how a guitar neck is methodically shaped, you’ll enjoy the ride. And maybe that’s the point: an expensive guitar hewn from vintage wood isn’t for everyone, but if it’s for you, you’ll love spending time in the place where they come to life.

Available to stream in the UK from June 26.