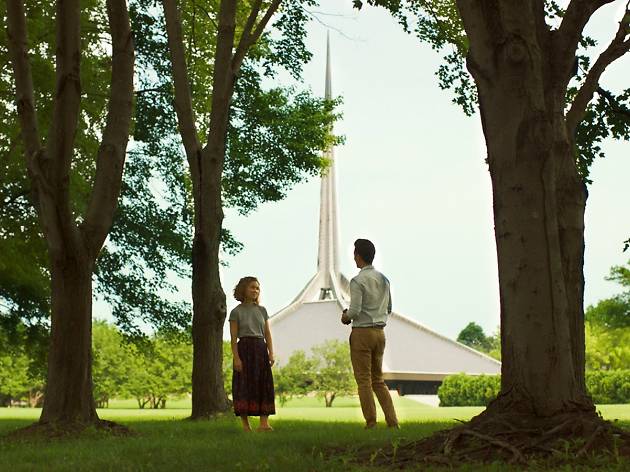 This high-art ‘Lost in Translation’ is full of striking visuals but ultimately flatters to deceive.

This is the first feature from writer-director Kogonada, a Korean filmmaker who made his name with a series of online videos about filmmakers he loves, from Wes Anderson and Robert Bresson to Richard Linklater and Ingmar Bergman. You can feel Kogonada’s sensitivity to film history in his gentle story of an unlikely pair who meet in Columbus, Indiana – a city whose modernist architecture offers the film’s striking backdrop. It’s a film full of brooding atmosphere, even if the story and performances don’t always feel as polished as its photography.

Jin (John Cho) is a visiting Korean, a solemn man who strikes up a walking-talking friendship with the hugely amiable and much younger Casey (Haley Lu Richardson), a librarian and tour guide. Both are at crossroads in their lives: Jin’s father, an architectural expert, is dying in a local hospital; Casey must decide whether to go to university or stay at home and care for her mum, a recovering addict.

There’s a lot for these strangers to share as they open up to each other, slowly and tentatively, talking about life, art and love with a platonic, cross-generational intimacy that nods to Bill Murray and Scarlett Johansson’s characters in ‘Lost in Translation’. The location is the film’s real star: Kogonada lends Columbus and its fascinating buildings an air of unforced spirituality as his characters wander and drive about the city. Visually, the film is always alluring, full of curious framings and teasing moments. If only the story and performances felt more credible: Cho is too often an awkward presence, with a distracting knack of staring into the middle distance, and the dialogue can feel more like an academic discussion than a casual chat. As a debut, though, it brims with promise and unshowy imagination.

Director:
Kogonada
Cast:
John Cho
Haley Lu Richardson
You may also like
Popular movies
We know this city. Do you?