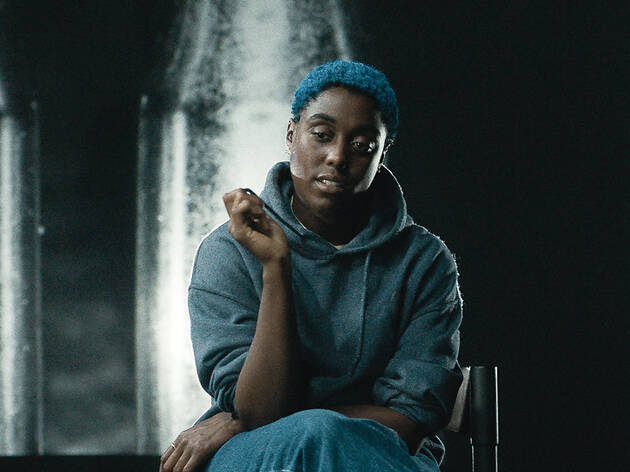 This is playwright debbie tucker green’s second feature, although unlike 2015’s second coming, which starred Idris Elba, it’s an adaptation of one of her own plays, the extremely powerful ear for eye (tucker green prefers lower case), which premiered at London’s Royal Court in 2018.

It’s presented as three parts, with the theme of racist violence running through them all – in the USA, but also in the UK. The first part gives us moments in conversations between many older and younger Black men and women, parents and children, but also between peers too, on the subject of how to deal with racist violence – how to avoid it, how to protest it, how to exist within and around it. The style of tucker green’s dialogue is distinct and stylised: sentences chopped up halfway through; interruptions; a poetic, cut-up back and forth. The second part is a two-hander in which a young Black woman (Lashana Lynch, seen recently in No Time To Die) confronts a white academic about the terminology used to describe, or explain away, a racist mass murderer.

For the final part, we see snippets of people, all white, reading out various racist laws, mostly from the USA, both during the era of slavery and also post-slavery, during the long era of legally-enforced racist segregation in southern states including Georgia, Alabama and Kentucky.

I remember seeing this production at London’s Royal Court and there was such a power to hearing non-professional British voices reading out these laws (already shot as video inserts for the theatre production), building a bridge between racism then in the USA and racism now in the UK. On film, some of the power of these scenes, and others, is a little diluted. It’s impossible entirely to recreate the effect of being in the room with this play, but this ear for eye is still essential for the art and power and relevance of tucker green’s unique wordplay.