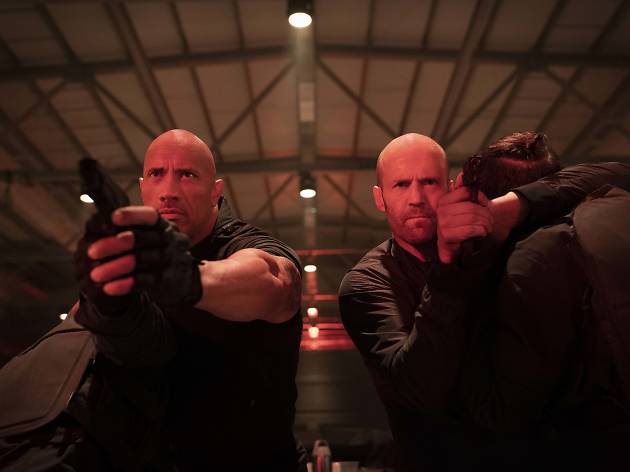 Between epic bouts of bickering, Dwayne Johnson and Jason Statham save the world in a spin-off that gets the job done.

An overflowing goblet of primo stupid, the gear-headed 'Fast & Furious' franchise actually has a mappable trajectory, away from street racing into gravity-defying heists and Hummers parachuting out of cargo planes. If you’re a ride or die for this kind of stuff, 'Hobbs & Shaw', the first spinoff, won’t disappoint, even as it strays even further into a fully unbelievable save-the-planet spy comedy. You don’t need to cram any homework. Dwayne Johnson and Jason Statham – as, respectively, single dad and counterterrorist agent Luke Hobbs and finicky hard case Deckard Shaw – don’t exactly have chemistry so much as a constant stream of simmering insults, many of which sting beautifully. When Statham calls Johnson’s Hobbs a 'giant tattooed baby,' it’s like being on the edge of an about-to-explode Krakatoa.

As it must, the plot throws them together against their will, on the trail of the stolen plague Snowflake, a 'programmable apocalypse' sought by genetically enhanced Mi6-agent-turned-terrorist – just go with it – Brixton Lore (Idris Elba), and carried internally by Hattie, Shaw’s sister and a force of nature in her own right (she’s played by 'The Crown’s electrifying Vanessa Kirby). As unbound by reality as 'Hobbs & Shaw' is, there are some places it simply can’t go: Kirby’s Hattie plants a smooch on the weirdly asexual Johnson (less a princess kissing a frog than a quick lip-lunge) and we’re never going to buy that.

Directed by former Brad Pitt stunt double David Leitch, the movie takes pains to give multiple characters redemption monologues – about as fun as finding a hair in your popcorn. But when it’s skipping from dangerous-looking London street chase to Russian lab break-in to – most deliriously – a last-act Samoan family beatdown involving spears, 'Hobbs & Shaw' finds its one note, the one you came for, and hammers on it effectively.