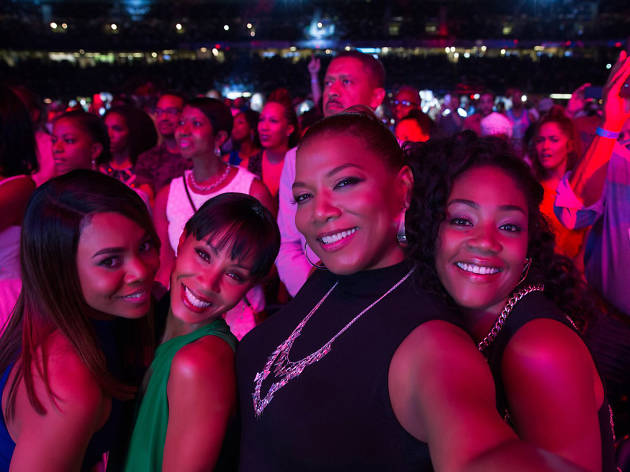 Exuberantly trashy and sneakily deep, ‘Girls Trip’ perfects the female-centric raunch-comedy formula of ‘Bridesmaids’ and ‘Bad Moms’. We’re still talking about simple sex-and-drug-laden pleasures here, this time involving a quartet of black college buddies, formerly inseparable, who have eased into life’s compromises. They head down to New Orleans for a weekend of well-financed debauchery. But for some reason, the wildness feels wilder, the vulnerability rawer and the sisterhood stronger here.

With unusual equanimity, the script (from writers whose credits include ‘South Park’ and ‘Black-ish’) features four distinct main characters. Ryan (Regina Hall) is a rising Oprah-style TV presenter with a popular show, a doting former-pro-football-star for a husband and a bestseller called ‘You Can Have It All’. Sasha (Queen Latifah) used to be a New York Times reporter; now she’s a gossip blogger. Lisa (Jada Pinkett-Smith) is a single mother of two who’s given up on dating so completely, her wardrobe consists of either hospital scrubs or frumpy sweaters. And Dina (Tiffany Haddish, stealing the movie) is, well, Dina: brassy, impulsive, recently fired, the most fiercely loyal –definitely the fiercest.

‘Girls Trip’ is so successful because it lets its cast of improvisers ease into a bond that begins to feel bone-deep. The story’s plot points – a stream of betrayals, some serious, some not – work elegantly enough and the setting, New Orleans’s famed Essence Festival, allows for plenty of music world cameos (Sean Combs pokes the most fun at himself). But it’s the manic energy between the four leads that turns the film into something unexpectedly alive, from its euphoric dance-off against millennial Instagrammers to every bit of hotel room banter. You don’t mind when the film gets around to making a point, because it’s already delivered on something more meaningful: a fully fleshed out gang of jokers who truly love each other.