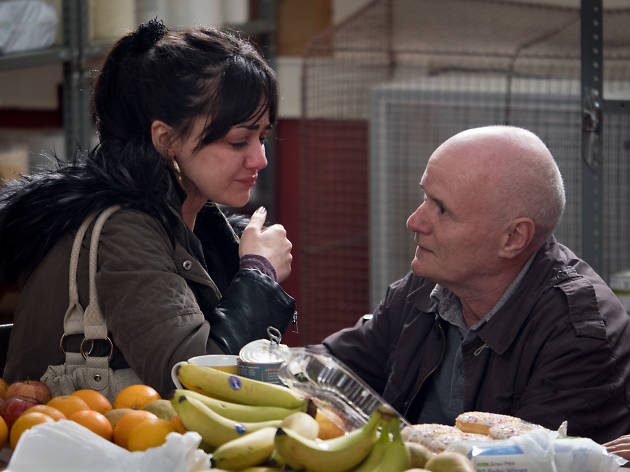 Fifty years since Ken Loach raged against homelessness in his television play 'Cathy Come Home', the British filmmaker has made a film infused with the same quiet but righteous anger about the failings of the society around him. 'I, Daniel Blake' is the story of an unlikely but tender friendship between Katie (Hayley Squires), a single mother from London with two kids, and Dan (Dave Johns), a Geordie carpenter in his late fifties who's out of work and recovering from a heart attack.

There are no histrionics here, no crowd-pleasing genre leanings, barely any score: Loach tells his tale straight and with the confidence of someone who knows that they have a story to tell, with no need for bells and whistles. It's a spare film, muted in colour and unflashy – and it's all the more powerful and urgent for it.

Both Katie and Dan are feeling the sharp end of the shrinking welfare state: Katie has been forced to move her children north to Newcastle to find a flat; Dan is stuck in a nightmarish bureacratic limbo between work, illness and benefits. 'We're digital by default,' a job centre worker tells this man who's never used a computer, pointing him towards yet another online form. The language of impersonal government bureaucracy runs through the film. It's blackly comic until it begins to sound threatening, even deadly.

Loach sketches with compassion the growing humiliation felt by both Dan and Katie; forces beyond both are turning them into different people. Dan is community-minded, gentle, a laugh. At first, he's able to criticise, even laugh at, the system that's crushing him. The tragedy of the film – and its rousing point – is that in the end it's all too much for one man, however much he takes a stand. Dan, and people like him everywhere, need a Katie watching their back; they need a community, a benevolent government, us. Katie is proud, outwardly together – so much so that the the film's most devastating scene comes when she lets her mask slip in public during a visit to a food bank.

In style, 'I, Daniel Blake' is perhaps Loach's most unassuming, straightforward film since 2001's 'The Navigators'. It goes in for the kill almost meekly. Like almost all of Loach's film's of the past 20 years, it's written by Paul Laverty, and there are small moments which betray his keen researcher's nose, like the tactics used to keep an unheated property warm (bubble wrap on the windows; candle-powered improvised heaters). A sub-plot about Dan's younger neighbour selling dodgy trainers imported from China feels a touch superfluous (another detail surely picked up in research), but this is mostly a film with a clear-headed and undiluted mission. It shares its purpose with some humour and a whole load of passion and fury.

Director:
Ken Loach
Cast:
Dave Johns
Hayley Squires
Micky McGregor
You may also like
Popular movies
We know this city. Do you?