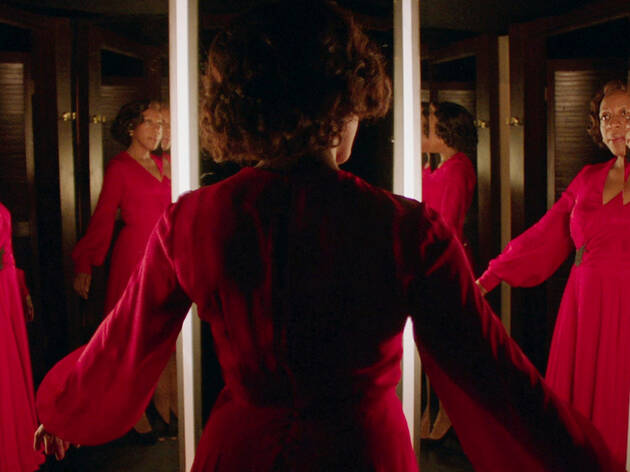 The first – maybe the only? – thing you should know about ‘In Fabric’ going in is that it’s about a killer dress. Not killer as in fashionable or a knockout; it’s actually a garish neon-red distraction that looks like it was designed by a fire inspector. But the garment does carry a curse with it, generally making life difficult for its wearer when it’s not slithering under bedroom doors, floating up stairways and causing the washing machine to go ballistic. You can enjoy these scenes in the goony, slightly prim way they’re meant to be received, but if you sit through this mesmeric film – one that eventually scrapes the far edge of a nightmare – you won’t leave laughing.

Peter Strickland, the fastidious yet delightfully subversive British writer-director, has his fetishes: for the sights and sounds of an earlier analog era, of cheapo zoom lurches and shuddering synth bloops. Like Anna Biller, the California indie filmmaker of 2016’s ‘The Love Witch’, Strickland is obsessed with retro horror; also like Biller, he’s no mere nostalgist. He wants to invest the language of ’60s and ’70s exploitation cinema with liberated ideas. The first big one of ‘In Fabric’ comes when we visit Dentley & Soper, the fictional department store at the exotic heart of Strickland’s plot. It’s an ominous place, staffed by imposing, statuesque saleswitches (including the director’s favorite actor, Fatma Mohamed) who, in a bizarre ritual, chase their female customers toward the merchandise while clapping rhythmically, hoping for a ‘transaction of ecstasy’.

If you haven’t yet guessed, Strickland’s real terror concerns our addiction to buying things, and ‘In Fabric’ goes way beyond zombies in a mall. What happens in his store’s subterranean recesses is part of the secret pleasure of watching the film and won’t be spoiled here (other than to say it involves unusually lifelike mannequins). It’s worth noting, however, that Strickland has made a huge leap from his two prior features, ‘Berberian Sound Studio’ and ‘The Duke of Burgundy’, both accomplished efforts but hermetically sealed in their own weirdness.

Now Strickland has actors like ‘Secrets & Lies’s Marianne Jean-Baptiste and Hayley Squires (the dramatic powerhouse from ‘I, Daniel Blake’), lending his horror a working-class believability. And as his movie deepens – from the lonely desperation of finding a new dress for a big date, to job anxieties, fears of emasculation and, in several unforgettable scenes, the lulling spell of shop talk – Strickland crams his film with more anti-consumerist curves than its waist size would indicate. Try it on, but carefully. It leaves a mark.