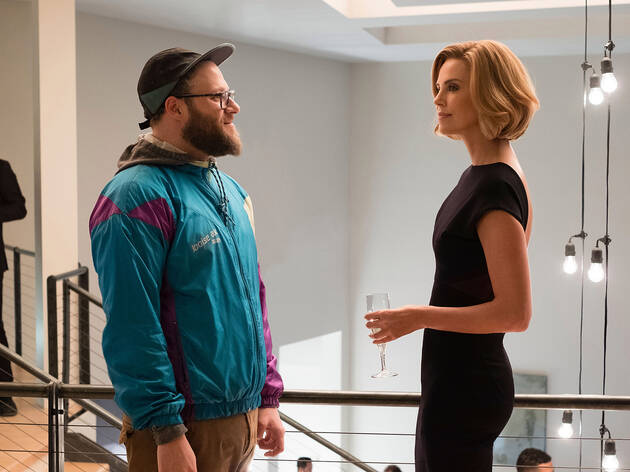 Both far-fetched and lighthearted, this politically minded rom-com plays like a broadcast from another planet.

As unicorn-rare as studio political comedies are, it’s tempting to give the aptly titled Long Shot a pass, until you realize it’s not saying much of anything. The setup has a topicality that already feels a few years outdated: Bob Odenkirk plays a dim U.S. president whose only qualification for the job is having portrayed one on TV (a credential that makes him more experienced than the White House’s current occupant). Intending to resign and make the “more prestigious” shift to movies, he endorses Charlotte Field (Charlize Theron), his workaholic Secretary of State whose marketing firm ranks her attributes like a Dungeon & Dragons character sheet, giving her low marks for “humor.” How will this Hillary–esque candidate crack the glass ceiling? By employing the speechwriting sass of a lefty alt-journalist (what’s that?) by the name of Fred Flarsky (Seth Rogen), whom she used to babysit.

Ostensibly verbal and cutting, Long Shot actually works best during its bits of physical business. Theron continues to prove herself a genius of ungainly moments: Her wave from the podium has an unnatural elbow wobble that makes Julia Louis-Dreyfus’s Elaine dance from Seinfeld seem smooth. And Rogen gets more mileage out of a turquoise windbreaker than you’d think possible. The central joke of Long Shot, briskly directed by Snatched’s Jonathan Levine, is that these two oddballs fall in love, itself a notion that’s somehow mutually insulting to both Theron and Rogen. But when it’s being dumb enough to have Charlotte drop molly and space out in an impromptu war room during a crisis, it has just the right amount of irreverence, thanks to fun performances (including one by O’Shea Jackson Jr. as Fred’s superwealthy friend, cruising on a LaCroix-fueled cloud of serenity).

Eventually, a phoniness takes root in the script (credited to Dan Sterling and The Post’s Liz Hannah), which morphs from scoring feminist points against a thinly veiled Fox News to selling out its Charlotte just when she needs her courage the most. She and Fred are supposed to be creatures of idealism, helpless to resist their inner impulses—at least that’s how they’re established. A shrewder movie would have them discover that slowly, growing closer not out of a half-remembered teenage crush but an attraction based on ideas. (Already we’re thinking about this one way too hard.) If you’re a filmmaker but not Armando Iannucci, creator of TV’s scabrous Veep (and last year’s equally savage The Death of Stalin), maybe sit out the next election cycle.