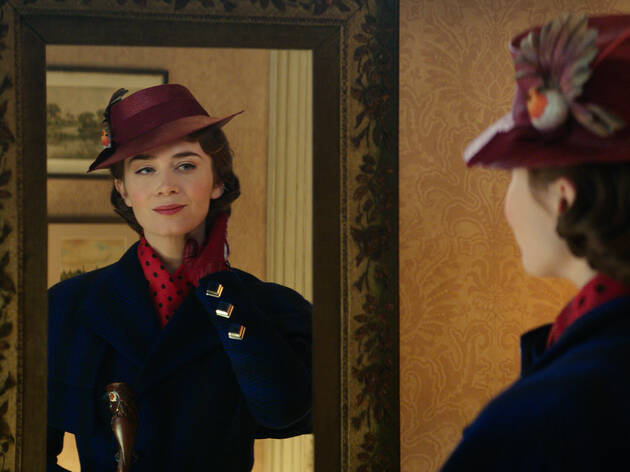 Delivering old-school, kite-flying, chimney-sweeping nostalgia, Disney’s improbable sequel – coming a full 54 years after the original fantasy – is a risk that magically pays off. ‘Mary Poppins Returns’ is a defiantly nostalgic musical, not only in its gaslit 1930s London (the days of the ‘Great Slump’, as we learn), but also via its songs. Ace composer-lyricists Marc Shaiman and Scott Wittman nail the retro mood.

Even though this is a treat for Poppins fans of a certain age, flashes of modernity sneak through in Emily Blunt’s knowing nanny, purring through her impeccable pronunciation. ‘One never discusses a woman’s age,’ she snaps at the mystified now-grown-up family she all but re-adopts as her new personal project when, a generation later, her nannying is needed again. Mary’s umbrella-assisted descent from the heavens is a stand-up-and-cheer moment (as is a fleet-footed cameo by that original cock-er-nee, Dick Van Dyke), but there’s a deeper satisfaction in the songcraft that gives a thirtysomething Michael Banks (Ben Whishaw) the quiet, McCartney-esque ‘A Conversation’, pitched amid his grief and loneliness.

That is to say, there are kids in this update (a trio of relentlessly upbeat adorables) but they’re incidental to the real kids – lost adults who can get a handle on life’s cruel realities. Like the 1964 film, ‘Mary Poppins Returns’ vibrates with economic anxiety: This time, house repossession and homelessness. It won’t take the wide-eyed presence of Hamilton’s Lin-Manuel Miranda (or a scene-stealing Meryl Streep as Mary’s vaguely Eastern European cousin, Topsy) to put you in mind of Brexit tensions or America’s own xenophobic moment.

The movie’s response is British in the most wonderful way: socially minded, psychedelic (brace for some truly hallucinogenic animation) and optimistic. Mary, for all her chipper rectitude, is the film’s angel of compassion. When Blunt, in strong voice, sings a new song, ‘The Place Where Lost Things Go’, she’s offering up a cosmic coping strategy. ‘There’s nowhere to go but up,’ sings the cast, buoyed by balloons and a spirit of hope that’s been gone too long.