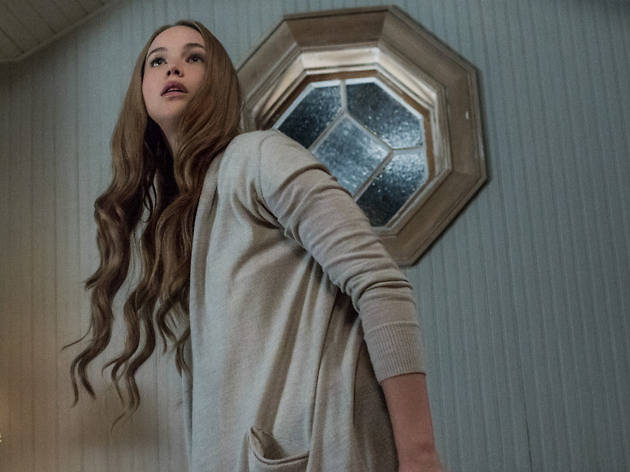 This in-your-face psycho-horror starring Jennifer Lawrence and Javier Bardem is so much more than a haunted house movie – it‘s bold, barmy and brilliant

‘Baby?’ That’s the first thing we hear in Darren Aronofsky’s unhinged psychodrama, an instant landmark of test-your-limits cinema. It’s the gentle, groggy call of a young wife whose name is never mentioned (Jennifer Lawrence, increasingly rattled) who wakes up alone in bed, uncertain where her intense poet husband (Javier Bardem) is or her general status in the isolated farmhouse they’re renovating. But ‘Baby?’ is also a clue into the deeper mummy drama to come. Will there be a baby for them? And if so, when? Will it be too soon, or not soon enough? To compare ‘Mother!’ to other mama-minded thrillers like ‘Rosemary’s Baby’, ‘Don’t Look Now’, ‘Antichrist’ and ‘The Babadook’ is almost selling it short. This one’s a crucible of sweaty pre-natal panic, weird knocks at the door, mind games and ultimately, a roaring, miniature apocalypse set inside a single claustrophobic living room. If that already sounds like your home, it’s time to go and give it a try.

Apart from ‘The Wrestler’, Aronofsky prefers things greenish and sick-looking, like the open sores of ‘Black Swan’ and ‘Requiem for a Dream’. ‘Mother!’ is firmly in that tradition, but there’s exquisite control in the way this writer-director eases us into his nightmare, working from an original script that must represent hundreds of hours of therapy. There’s a tension between this couple: a war of aloofness and neediness. Bardem’s character has one of those precious creative routines that requires an imposing amount of solitude. She, meanwhile, smears different shades of puke-coloured gunk on the wall out of boredom. Already we feel their disconnection, so when mysterious guests start showing up, including a hacking, smoking doctor (Ed Harris) and his unkempt, half-drunk wife (Michelle Pfeiffer, reviving her glorious Catwoman purr), you feel for Lawrence, cleaning up their mess and enduring their judgy scowls.

So far, so Polanskian. Given how deliciously unsettling this first hour is, it’s hard to know precisely when the movie slips the leash of reality. Is it when two furious adult brothers (Brian and Domhnall Gleeson) barge in and start punching each other? Or when blood seeps out of an orifice in the floorboards? ‘Mother!’ is a movie that invents new shades of mania. After much screaming, destruction of furniture, an impromptu eulogy and even some long-belated screwing, Lawrence turns to Bardem and smiles a crazy grin. She’s expecting and she knows it. This is the moment when Aronofsky doubles down, building a calamitous swirl of violence around his heavily pregnant hero who’s suddenly in her third trimester. You cringe at the viciousness.

Grappling with this powerhouse sequence – steeped in gore, religious symbolism, hundreds of marauding strangers (including a spooky Kristen Wiig) and sheer chutzpah – is the moviegoing challenge of the year. ‘Mother!’ is, without doubt, the most radical studio film since ‘The Last Temptation of Christ’, and your disbelief at its daring will be part of the fun. Matthew Libatique’s camera, hovering close to Lawrence’s brow like an angel of sympathy, helps us into her emotions, but just as powerfully Aronofsky weaves in a savage indictment of ‘artistic’ male ego and entitlement that makes his climax feel self-critical. In an intensely personal way, ‘Mother!’ is an apology to anyone who’s ever felt eaten alive by love at its most selfish. Naturally, it’s required viewing for married couples.